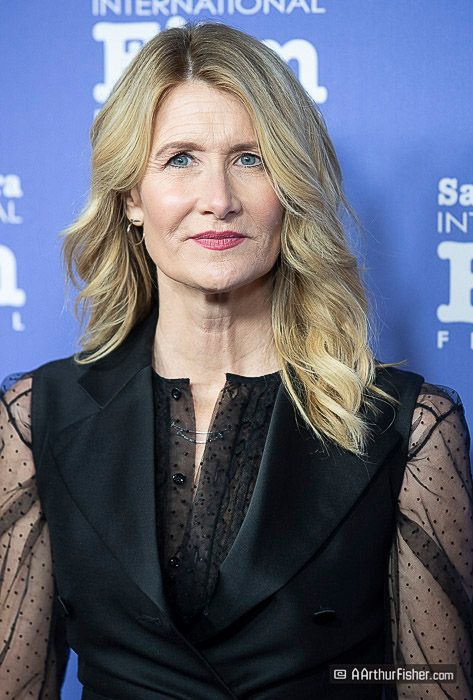 Written by Briana Westmacott on 22 January 2020 Posted in SBIFF Reviews.

Martin Scorsese said it first. At only age seven, Laura Dern patiently sat at an ice cream counter eating a banana cone for nineteen takes while Ellen Burstyn and Kris Kristofferson played out their love affair in Alice Doesn’t Live Here Anymore. “Marty said if I could do that, I have got to be an actress,” Dern reminisced. And now, nearly half a century later, she is an icon.

Being conceived on a movie set didn’t hurt, Dern quipped as she told the tale of her Hollywood parents Bruce Dern and Diane Ladd meeting during the production of The Wild Angels. Deadline’s chief film critic, and moderator for the evening Pete Hammond, went so far as to note, “Your parents gave new meaning to the word Action!” Dern grinned.

Laura Dern accepted SBIFF’s Cinema Vanguard Award, a tribute to recognize actors who have blazed their path by taking risks that change cinema. Laura’s father Bruce Dern received the same award in 2014 making them the first father-daughter duo ever to be honored.

On her red carpet walk into the Arlington Theatre Laura’s grace emanated as she stopped to chat with the eager press. She answered questions about her craft and promoted various causes.

Upon entering the Arlington Theatre, she came to sit alongside members of the audience to view the opening montage highlighting her life on the screen. To the tune of Fleetwood Mac’s ‘Landslide’, Dern’s face lit up as we all watched snips from a career that has earned her four Golden Globe awards, an Emmy and three Academy Award nominations.

“My heart is here in Santa Barbara,” Dern said as she sat down to join Hammond for their interview. A packed theater was wowed by clips from: Mask, Blue Velvet, Wild at Heart, Rambling Rose, Jurassic Park, Citizen Ruth, Wild, 99 Homes, Little Women and Marriage Story.

Dern spoke about her experience growing up behind the camera and the influences she took from a long list of A-list directors (Scorsese, Hitchcock, Lynch, Spielberg, Payne, Gerwig, and Baumbach just to name a few). At age six Alfred Hitchcock gave little Laura a mini director’s chair and she described how she watched him work, “He began each take with ‘Entertain me, please’ instead of ‘Action’." At nineteen, Dern left UCLA to star in David Lynch’s Blue Velvet, “David was my college education,” Dern contended. Now, at age 52, she’s adding lines about God and f#@*ing to Noah Baumbach’s Marriage Story script: “I have the privilege of telling stories and doing what I love,” Dern said, “…and I’m having so much damn fun!”

Laura’s work in television has procured her an Emmy for her role as Renata Klein on HBO’s Big Little Lies. And she will never be forgotten as the co-star in the infamous Puppy Episode where Ellen DeGeneres comes out to America. Dern expressed how much she enjoys being a “fierce and radical storyteller.”

It isn’t an accident that the parts Dern plays are oftentimes very different, if not opposite. “Never be pigeonholed into one role, my dad would always say.” A look at her characters from 2019 is the perfect example; Dern starred as the loving mom Marmee in Little Women and the vicious lawyer Nora in Marriage Story—one is holding a family together while the other is tearing a family apart.

Having already won the Golden Globe for her role in Marriage Story, Dern is favored to take home the Oscar. Hammond culminated the interview by pointing out that Dern’s birthday is the day after the Academy Awards and he hopes that she brings home an extra special gift this year.

Roger Durling proceeded to read a text/note from Laura’s mom Diane Ladd saying, “Laura is a caring, evolved human being and I love her so much. I appreciate the gift the universe gave to her.”

Durling turned the microphone over to Netflix’s Ted Sarandos who went on to describe Dern as both, “a canvas and a brush; a tool and a weapon for filmmakers. She’s a fearless warrior.”

As Dern accepted her award, she thanked the audience and closed with, “Bless you all.” There’s no doubt, we are blessed to have Laura Dern entertaining us on screen.