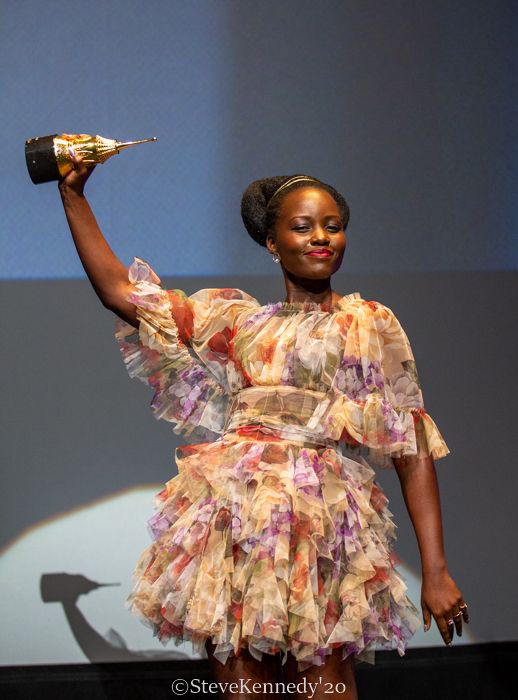 Written by Jennifer Strube on 21 January 2020 Posted in SBIFF Reviews.

It certainly worked for her.

Born in Mexico, Nyong’o spent her childhood in Nairobi, performing skits to her large extended family. “I just loved make believe, and then I realized, oh the people in that tv box, they do that too.”   While studying film at Hampshire College in Massachusetts, she landed a job as a PA in the film Constant Gardner and decided to pursue higher education in drama.

“I went to Yale with no craft. I wanted to understand my instrument, and emotions are a hard thing to tame, to train; I didn’t think relying on vibes was a sustainable way to be an artist.” While at Yale, Nyong’o began seeing acting as the pursuit of truth. “When you focus on that, the emotions can change, but there is some underlying purpose you are going for.”

Entertainment expert Dave Karger moderated the evening and led the audience through rounds of standing ovations and intimate conversation.  Krager said, “I got to walk Lupita through the Dolby Theater six years ago and tell her this is where the Oscars are held. Shortly after, she was back on that stage for 12 Years a Slave (2013) and the rest was history.”

Playing Patsey the slave brought Nyong’o into a stardom whirlwind. Fresh out of Yale, the fledgling actor became the first Kenyan to win an Oscar, the first African actress to win Best Actress in a Supporting Role, and the first Mexican-born actress to win an Academy Award. “This was something you achieve at the pinnacle of your career, and I achieved mine at the beginning. I went from taking the subway everywhere to having to hide in taxis. As much as my world was getting bigger, it was getting smaller.”

Both perplexed and honored by her sudden fame, Nyong’o found herself longing for her early days in theatre. In what became a pivotal life moment, Emma Thompson took the young actress to dinner and gave her some sage advice, “You aren’t living a moment, you are living your life. You have to write your own story.” With that, Nyong’o took a pause from film and followed her truth back to the stage. The decision proved fortuitous when she won a Tony for her Broadway performance in Eclipsed.

Hollywood eagerly embraced her return as Nakia in Black Panther (2018). “I saw the trailer, had a good dance party, and thought, it’s happening again. I need support… I grew up watching lots of foreign film. I watched everyone but ourselves, and when I did see ourselves, the Africans were the backdrop. Here, the Africans were the story, and when people begin embracing their roots, that feels like a job well done.”

Not only was Black Panther a cultural phenomenon, the women of Wakanda became true heroines of our time. “We knew we had an opportunity we could not squander. We had to prove ourselves, and everybody brought their A-game. But it wasn’t a woman’s set; it was a great set. The value is not the womanhood, it is the excellence that those women brought.”

Of course, the evening could not convene without commentary of Nyong’o’s most recent genius in Us (2019). Directed by Academy Award winner Jordan Peele, the script originally terrified Nyong’o. “It’s a critical look at class dynamics with subtle rules where I played two characters at once.”

In a surprise twist, Peele himself arrived at the Arlington Theatre to honor Nyong’o’s work. “She gave me the dream role of my life as the director of her and her genius,” Peele said presenting her the Montecito Award. The Montecito Award is granted to actors who have made a significant contribution to film. Past recipients include Melissa McCarthy, Saoirse Ronan, Isabelle Huppert, Sylvester Stallone, Jennifer Aniston, Oprah Winfrey, Daniel Day-Lewis and Geoffrey Rush.

Accepting the award, Nyong’o gave a captivating speech: “It feels early for me to be reflecting on a body of work, but I’m so grateful I could start my career with choice and wait for the projects that felt worthy of my soul. It’s very luxurious, and it comes with a lot of responsibility. I recognize my privilege, and I recognize that, as humans, we all gather around stories, so there is an import to what I do, to tell important stories that shift cultural narrative and make the world a more colorful place.”

Remembering MLK Day, SBIFF’s Executive Director Roger Durling urged the audience, “The great MLK once said, ‘Love is the only creative redemptive transforming power in the universe… And Nyong’o knows that.  By far, one of the greatest actors working in cinema today.”

The evening also highlighted clips from Nyong’o’s other filmography in Little Monsters (2019), Queen of Katwe (2016), and Star Wars: Episode X – Rise of Skywalker (2019).

“My well is full,”  Nyong’o concluded. “I hope I can carry on making work that matters.” We do too, Ms. Nyong’o. Thank you for filling our hearts and our screens with your own truthful pursuits.