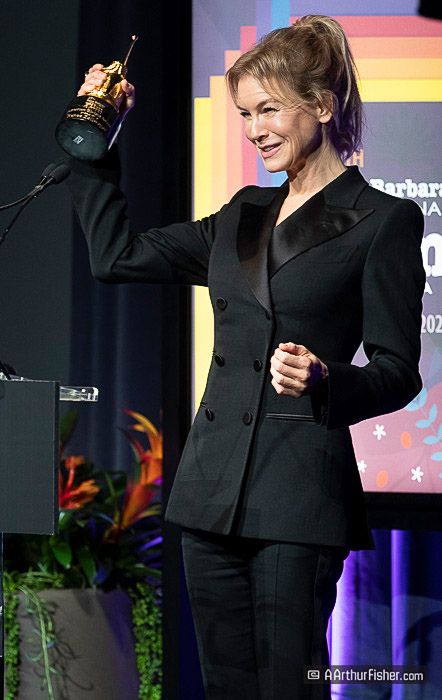 Written by Hillary Gordon on 16 January 2020 Posted in SBIFF Reviews.

She Had Us at Hello: Renée Zellweger Accepts the American Riviera Award

The rain didn’t stop an excited Thursday night crowd of Santa Barbarans from huddling under umbrellas and lining State Street to get a small glimpse of Hollywood glamour as the bona-fide A-list movie star Renée Zellweger rolled into town. There were cheers amongst the damp crowd as Zellweger entered The Arlington to accept the American Riviera Award at The 35th Annual Santa Barbara International Film Festival.

The American Riviera Award, given to actors who have made a significant contribution to American Cinema, was presented to a soft-spoken, Texas-accented, petite and grateful Zellweger. Moderated, at Zellweger’s request, by Scott Feiberg of The Hollywood Reporter, the evening was a celebration of Zellweger’s prestigious and acclaimed career.  Feiberg started the conversation at the beginning, asking about Zellweger’s childhood in Texas. She told the story of becoming interested in acting when her older brother took an acting class. “He quit, though, “she said with a laugh. Once she’d reached college, Zellweger wanted to be a journalist or a writer, and thought her love of acting was a thing best left in her adolescence. But, as she attended The University of Texas at Austin, she found herself always avoiding submitting articles to The Daily Texan, one of the nation’s most prestigious collegiate newspapers. In order to fulfill a graduation requirement, she took an acting class, and realized her true calling. She landed several auditions while still at Texas State and met a fellow Texas Longhorn acting student- Matthew McConaughey, who she would later star with in Dazed and Confused and The Texas Chainsaw Massacre. The two remain friends to this day.

Once acting opportunities dried up for Zellweger in Austin, she moved to Los Angeles, and while working as a barback at a club on the corner of Hollywood and Vine Streets she landed an audition with Cameron Crowe for Jerry Maguire. Crowe felt like an old friend to Zellweger, “He was a music guy, an Austin guy,” she said. When asked what it felt like to land a role with Tom Cruise, arguably the world’s biggest movie star at the time, Zellweger said she laughed the whole way to the reading with Cruise, that the whole scenario felt so ridiculous to her. After Jerry Maguire turned Zellweger into a Hollywood movie star, Frieberg asked her what that was like for her. Zellweger replied, “I was never trying to get anywhere. There was no calculated chess game. The joy for me is the telling of a story, being on set. That’s my joy. That’s my breath.”

Throughout the evening, clips were played of Zellweger’s many iconic film roles. From Bridget Jones’ Diary to Chicago to Mrs. Potter and Cold Mountain, to her latest film, Judy, the breadth of Zellweger’s talent became more and more apparent. If there was anyone in The Arlington Theatre with a doubt about Zellweger’s abilities, they were surely silenced by the many impressive and varied performances shown in the clips.  Zellweger has been nominated for best actress in a leading role for the 92nd Academy Awards for her performance in Judy, a film about the final years of Judy Garland’s life. She is a critic favorite and expected by many to take the Oscar home. When asked about playing Judy Garland, and what it was like to perform all the singing and dancing herself, Zellweger replied, “I never sang in that capacity, but I loved the story and I was curious about Judy Garland.” When asked if she could relate to Garland on a personal level, Zellweger replied, “Certainly. There are things I can relate to working in the industry- the vast gulf between public perception and a true life.” She went on to praise Garland, adding that “she’s a hero. She’s not tragic, she’s extraordinary.”

The evening ended with The American Riviera Award being presented to Zellweger by her friend, and accomplished songwriter, Diane Warren. Through a light-hearted and profanity-laced speech, Warren handed off the award to a beaming Zellweger. Upon accepting the award Zellweger spoke fondly of Santa Barbara, of the film festival and thanked the crowd for braving the weather. She was extraordinarily kind to the audience, stopping to shake hands with fans, accepting flowers and thanking people for being at The Arlington Theatre with her. When asked by Feiberg what she would be doing for a living if she hadn’t become an actor, she responded with a laugh, “Maybe I’d finally submit something to The Texas Daily.” Lucky for fans of film, Zellweger chose another way to tell stories, bringing many unforgettable characters to the screen.  As Warren said at the end of the night, “You had us at hello. You did. You still do.”