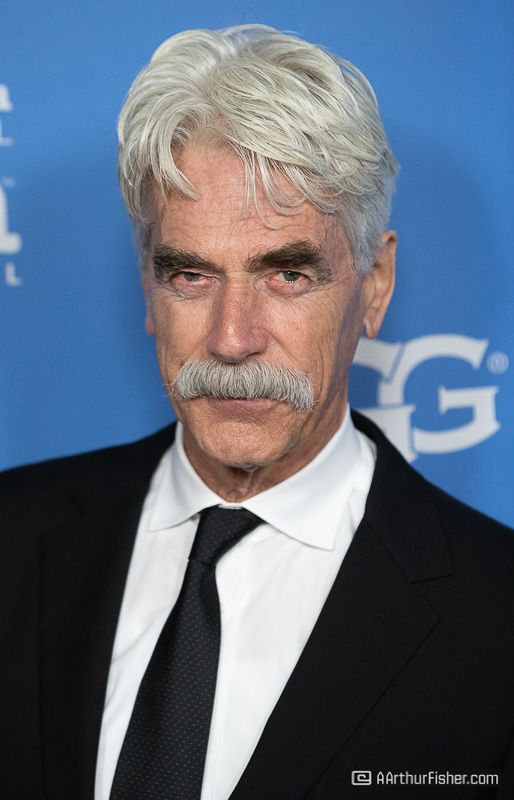 Written by Hillary Gordon on 07 February 2019 Posted in SBIFF Reviews.

It was an unusually chilly night in Santa Barbara when the red carpet was rolled out in front of the Arlington Theatre welcoming the 2019 recipients of the Santa Barbara International Film Festival’s Virtuosos Awards. The award is given every year to actors who have had breakout performances. This year’s recipients included Yalitza Aparicio (Roma), Sam Elliott (A Star is Born), Elsie Fisher (Eighth Grade), Claire Foy (First Man), Richard E. Grant (Can You Ever Forgive Me?), Thomasin McKenzie (Leave No Trace), John David Washington (BlacKkKlansman), and Steven Yeun (Burning).

Moderating for the 9th year in a row, Turner Classic Movies host Dave Karger brought the stars out for an interview one by one, in reverse alphabetical order, before hosting a panel of 7 of the 8 award winners (Yalitza Aparicio will receive her award on another night) to close out the night.

The first award winner he brought up to the stage was Steven Yeun. Known lovingly as Glen from the TV show The Walking Dead, Yeun was being honored for his breakout performance in the South Korean movie Burning. When Karger asked Yuen what it was like to return to South Korea, his birthplace although he’d been raised in the US, Yuen described it as “amazing, life changing.” Then went on to joke that during filming “the eyes of my parents were looming over my head.” Karger brought up Yuen’s roots as a comedian and in Chicago improv. “I think some of my improv friends are probably confused by the roles I’ve chosen,” he said. Though Yuen has moved onto more serious roles, he was funny and charming on the Arlington Stage.

John David Washington was next to be interviewed about his role in the Spike Lee film BlacKkKlansman. When telling the story of getting the part, he said he didn’t even have to audition, “I got a text form a number I didn’t recognize saying ‘Yo, this is Spike. Call me.’” He didn’t quite believe it, but called nonetheless and is now receiving multiple awards for his role in the film. The film takes place in the 1970s, and Washington, who was born in the 1980s, said he surrounded himself with ‘70s pop culture to get into the role. He gave up his favorite music and replaced it with music from the 1970s and watched a lot of Soul Train. BlacKkKlansman is based on a true story and Washington noted that he film is funny and it’s ok to laugh, but “while you’re enjoying yourself, there’s also something to learn.” When asked if he always gets film roles without auditioning, he answered, “Nope, just with Spike.”

Australia’s Thomasin McKenzie, sounding wise way beyond her 18 years, was next on the stage. She was being honored for her role in the film Leave No Trace. McKenzie descends from a long line of actors; both her parents and grandparents are in the business. Her still working 91 year old grandmother was made a dame for being a female pioneer on screen. When asked how difficult it was to perfect an American accent for her film (which she does flawlessly) she admitted to working with accent coaches because “you don’t want to be doing American auditions with a thick kiwi accent no one can understand.” She went on to talk of a movie she did when she was 13, portraying a real life woman who was raped in Australia by policeman as a young teenager. It changed the idea of acting for her, she said, “it’s not putting on a performance. It’s not fakery, it’s being. It’s an opportunity to tell really important stories.” To which she got a raucous applause.

Richard E. Grant was being honored next for his role in Can You Ever Forgive Me? Nominated for an Oscar for Best Performance by an Actor in a Supporting Role, Grant was charming and funny on the Arlington Stage. When speaking of attending the Oscars Luncheon, he described it as “Madam Tusssauds come to life.” Inevitably, he was asked about the undeniable chemistry he and Melissa McCarthy have in the film. He said it took him three and a half Nano seconds to realize he and McCarthy were going to work well together. “We started shooting on a Monday, and she’s having my twins in August,” he joked. In all honesty he said he hopes to work with her again soon. And that she feels the same way. “At the moment,” he added.

Claire Foy was next to grace the Arlington stage, being honored for her performance in First Man. A British woman known for her role as Queen Elizabeth II in the Netflix drama The Crown, Foy said she was honored to be given a very American role. When asked what it was like to play a woman whose young daughter had just died while having a young daughter herself, Foy said “I never want to cheapen someone else’s real life experience.” She keeps the two separate, and has to in order to keep herself in the role. Having recently left her role as Queen Elizabeth, she learned Olivia Colman is coming in to take her place. Foy will probably have a party to watch Colman in the role and joked that she’ll probably think, “they’re doing a really good job, god dammit!”

Fifteen year old Elsie Fisher came onto the stage next, picking up an award for her role as Kayla in the film Eighth Grade. When she noted that she often speaks like a teenager, Kroger said, “You’re allowed to sound like a teenager.” “Well,” Fisher said, “I am one!” Fisher wrapped up filming Eighth Grade right after finishing her own eighth grade year at school. “Being in eighth grade is chaos. It’s like war,” she said. “I felt very alone in my eighth grade year, and it’s sweet that others don’t have to feel alone because of the movie.” Although the film premiered at Sundance and Fisher has been nominated for multiple awards for her performance, when she got back home and auditioned for her high school play, she didn’t make the cut. “I didn’t need that role anyway,” she joked. “I’m all good.”

Sam Elliot was the final performer to be interviewed. He walked onto the Arlington stage in a suit and cowboy boots. Elliot was being honored for his role in A Star is Born. Fifty-one years into his career, he’s been nominated for his first Oscar for his role in the film. “It’s been incredible,” Elliot said, “especially because I’ve wanted it for so long.” When his wife, Katharine Ross, an Oscar nominee herself broke the news to her husband, his response was “well that’s cool.” But he went on to say it’s not really about the awards, “they’re great, but it’s really about the work.” He spoke fondly of working with Lady Gaga (Stephanie as he called her) and Bradley Cooper, who directed A Star is Born, describing him “as brilliant a director I’ve ever worked with.”

To close the night, all 7 of the attendees came back on stage to answer a few more questions. One question, in honor of the film, was what would be one word to describe yourself as an eighth grader? Dweeb (Foy), virgin (Grant), coward (McKenzie), confused (Washington), last chair violin (Yuen) and lost (Elliot.) The questions went on with film recommendations from each of the honorees. Elliot recommended BlacKkKlansman, Washington said If Beale Street Could Talk, Foy said Cold War, Grant said The Favourite, McKenzie agreed with The Favourite but also added Roma, Yeun recommended Shoplifters, and Fisher Hereditary. “It ruined my life!” she said.

When each of the stars were asked what other actor they knew they’d have instant chemistry with, Washington immediately said Beyoncé. And all other actors followed suit when it was their turn to answer. Beyoncé, obviously, they each agreed. Except for Elliot, who looked a few to his left and said “Claire Foy.”

After all the questions had been answered, each honoree was presented with a golden Arlington Theatre-shaped Virtuosos Award by Santa Barbara’s own Christopher Lloyd. The evening proved to be glamourous, enlightening and a whole lot of fun. Proving, once again, that The Virtuosos Award is one of the many reasons The Santa Barbara International Film Festival is so special.