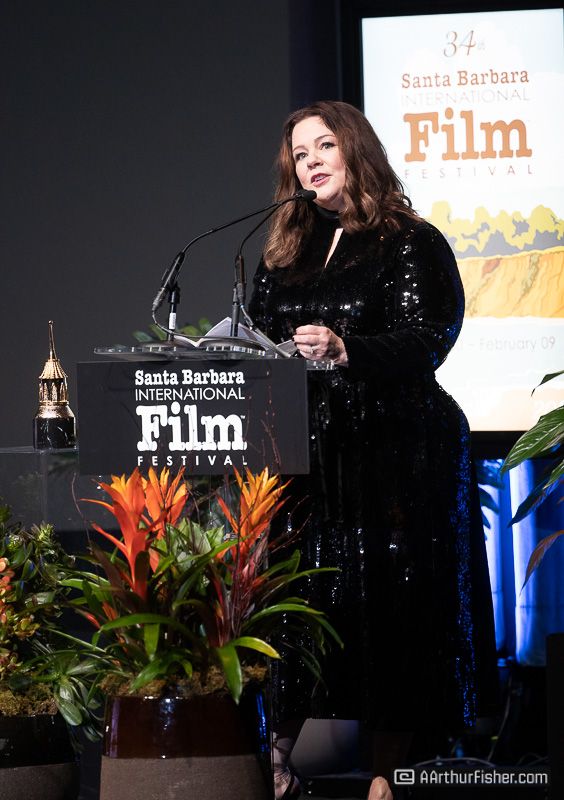 Written by Jenny Schlax on 05 February 2019 Posted in SBIFF Reviews.

How Far Can You Push It: Melissa McCarthy

There was some sort of big national championship ball game on the night the Santa Barbara International Film Festival chose to honor Melissa McCarthy with the Montecito Award. But so what – Melissa McCarthy was here!

At least that was the sentiment from SBIFF Executive Director Roger Durling. The Montecito Award is given to a person in the entertainment industry who has made a great contribution to film. Known for her comedic ability, McCarthy was being recognized for her dramatic portrayal of Leonore (Lee) Israel in this year’s Can You Ever Forgive Me?

Arriving late on stage so that she could watch the montage reel, McCarthy entered looking glamorous in a sparkling black gown. Sounding just as sweet as can be, she instantly started charming the crowd with her stories of making it to this point in her career. Growing up on a small farm, McCarthy learned to use her creativity to have fun. She enjoyed dressing up and making costumes “because you could become anyone!” McCarthy liked the thought of people thinking she looked like a tough girl until her sweet little “hi!” would come out of her mouth – and boy the things that come out of that mouth!

After “taking some time off from not going to classes,” McCarthy joined her sister in Colorado for a brief spell, before beating feet to New York City where she began performing stand-up within three days. “My parents were very supportive,” McCarthy recounts. “My mom told me that people in fashion were so unreliable. And I replied ‘so you thought stand-up was the better option?!’” Due to the constant heckling, stand-up ended up not being her jam, so she decided to give acting a try. McCarthy eventually made her way back to L.A where with the help of her cousin, Jenny McCarthy, she started to get small parts. She made her big break just before her 30th birthday with a role on Gilmore Girls.

McCarthy’s tribute included nods to Go (1999), Charlie's Angels (2000), and The Nines (2007). However, it was her association with the L.A. comedy improv group, The Groundlings, that would allow her the freedom to push the boundaries on her comedic abilities. “You have to feel the room and learn to push and not to push,” McCarthy explains. She thought she had blown the audition for her role as Megan Price in Bridesmaid (2011) when she and fellow Groundlings alum improvised the audition scene. “I told myself, ‘well you blew it’,” McCarthy admitted. “You got too weird. You talked about sex with a sea creature.” But she did get the part, and was subsequently nominated for an Academy Award for Best Supporting Actress for her performance.

Other great opportunities to push the boundaries would come to McCarthy in The Hangover Part III (2013). “It was so fun to shut Bradley [Cooper] down,” McCarthy said of her character. “I thought, ‘this is probably good for him.’” Then she got to be mean to another big star, playing opposite Sandra Bullock in The Heat (2013). From there, her language in films just got worse with Tammy (2014) and Spy (2015). “I have two girls - they haven’t seen 92% of my films because of that language,” McCarthy confessed.

However, it is her recent dramatic portrayal of an alcoholic writer in Can You Ever Forgive Me? that is getting the acclaim this year. McCarthy put her name in as main character after learning the project had been tabled. “I was disappointed that I didn’t know her story and I got obsessed!” And through the story telling of director Marielle Heller, the story was brought to life.

Co-star Richard E. Grant was on hand to present the award on bended knee to “Melissa Loving McCarthy,” as he called her. The chemistry between the two was playful, as McCarthy accepted, stating “Thank you Mr. Grant – that’s what he makes me call him.” McCarthy went on to address SBIFF, “And thank you for shining the light on these types of movies; small with flawed characters… It’s important to show that people are not perfect – and that’s ok.” And thank you Melissa McCarthy for pushing the boundaries.