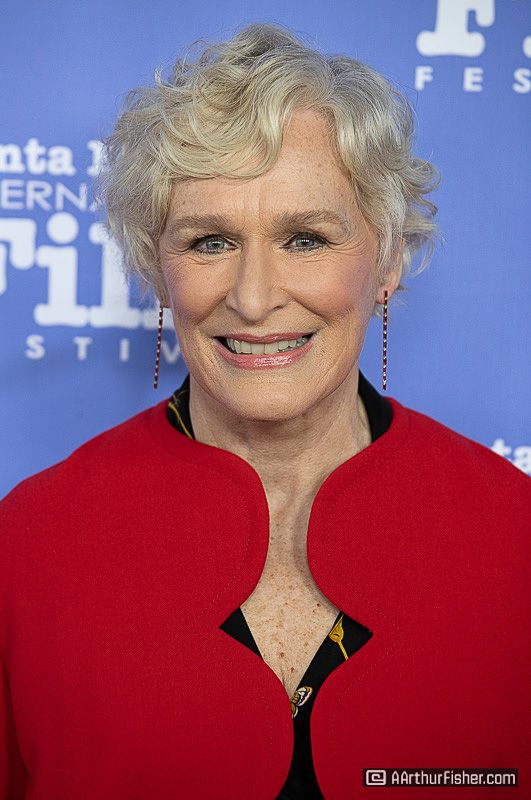 When the spires of light shine from flash cameras, Glenn Close doesn’t flinch. Instead, she beams. She stands with confidence and grace and isn’t afraid to own her place as she receives the festival’s highest honor: the Maltin Modern Master Award.

Close is the recipient of three Tony Awards, three Golden Globe Awards, three Primetime Emmy Awards, and two Screen Actors Guild Awards. A seven-time Academy Award nominee, she is up for yet another Oscar nomination for her role in, “The Wife”.

While entering the Arlington Theatre, Close is asked about her Golden Globe speech when she shared a beautiful tribute about her mom. “In the end of her life, my mother said, and she was a remarkable woman, ‘I don’t think I feel like I’ve accomplished nothing.’ …She was never able to fully express who she was, through something that she could have offered, you know, that would give validation to who she is.” Perhaps this has served as a divine reminder for Close to stay true to what brings her personal fulfillment.

When Close is joined by Leonard Maltin, the film historian with a respected keen eye for the most notable talent in the field, there is a humble and reciprocal respect granted. “This is really happening. There is no diverting the outcome,” Maltin chuckles, making light of the schedule change induced by intense storms, landing Close’s live appearance on the afternoon of Super bowl Sunday.

An emotional hush comes over the theatre as the opening video montage, “With one Look,” plays. This piece illuminates Close in her most notable film moments, and shows her extraordinary capabilities and diversity as an actress. Pip, Closes’ beloved dog, steels the stage when he escapes from the green room looking for Glenn. With her broad and sincere smile, Close embraces the pup and jumps right back into complete attentiveness to her award giver.

Throughout the afternoon, small windows into Close’s films are shown. When asked about the work involved in her character analysis, she shares that the character she played in Fatal Attraction, was the most researched of all those she has been given the honor to play. She folds in context of why that character, “loathed herself.” You can feel her compassion and empathy for what would cause anyone to behave in the ways this character did. With her fastidious acting talents, she is not afraid of getting underneath each and every characters’ “why.”

Full of humor and delight, Close maintains a beautiful aura of living her purpose. She seamlessly weaves compliments into everything she says. She shares about the extravagant work of her costume designers, the insights of the directors and writers with whom she has worked, the awe-inspiring skills of her fellow actors and screen partners, adding in silver linings whenever she can about Leonard and his breadth of knowledge and talent. This extraordinary humbleness makes her even more honorable.

Close’s role in “The Wife,” directed by Swedish-born Bjorn Runge, recently nominated for an Oscar, portrays a mother and wife whose refined writing talent was a closeted secret between her husband and herself. As her husband, played by Jonathan Pryce, rises to stardom as the awardee of a Nobel Prize for Literature, Close begins to question all that has led up to this moment. Roger Durling, Executive Director of SBIFF shares, of Glenn’s performance, “It is a masterful character study by a trailblazing performer.”

When receiving the Maltin Modern Master Award at the end of the evening, Close shares, “Wherever we can find within ourselves something that will remind us of what it means to be a human being, how we are all connected, how we die without connection, how we should nourish that common nervous system: That to me, will lead us into some new era.”

Close gives herself approval, above all else, to be who she is intended to be without entitlement of ego, but rather with grace. And isn’t this, by far, above any and all critics, the most valuable? Indeed, Oscar or not, she has earned Santa Barbara’s highest approval.