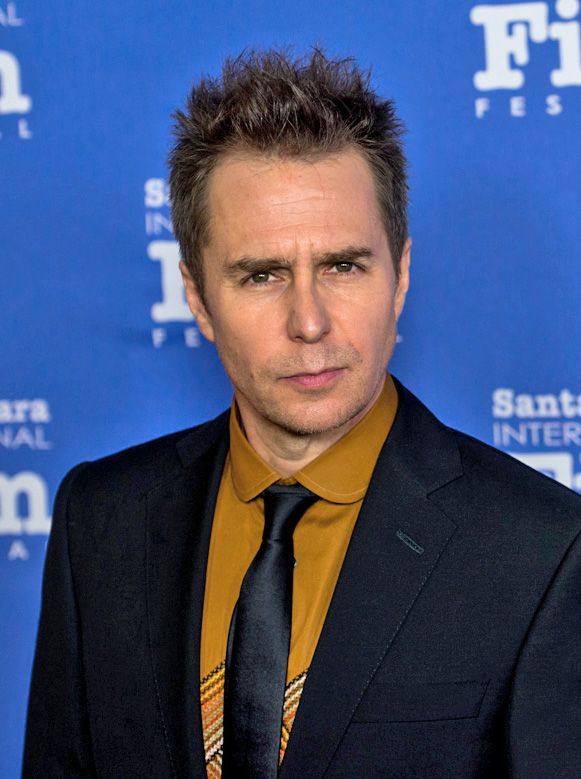 Written by Jenny Schlax on 08 February 2018 Posted in SBIFF Reviews.

The Santa Barbara International Film Festival continued to deliver big Hollywood stars to The Arlington Theater well into its second week. Academy Award nominee Sam Rockwell came by to accept the SBIFF American Riviera Award for his portrayal of a burned-out police officer in Three Billboards.

The SBIFF American Riviera Award recognizes actors that have made a significant contributions to American cinema, which is fitting for Rockwell with well over 60 films to his credit. “Sam [Rockwell] is versatile, gifted, and never the same character twice,” proclaimed the evening’s moderator, Vanity Fair West Coast Editor and Hollywood Ambassador, Krista Smith. And his movie montage amply verified this description.

“That makes me look like I know what I’m doing,” the New York-Cali boy proclaimed after the montage. Acting is in his blood, made obvious when he made his debut with his mother in theater at the early age of 10. Full of personality and literally popping with energy, Rockwell was a blast to watch both on the screen and on the questioning couch (chair really) during the evening’s tribute. “There was no plan B,” Rockwell admitted easily about his early struggles, “I’d be bussing tables and get recognized for Teenage Mutant Ninja Turtles. Then I’d have to ask if they’d like more bread.”

Stories easily rolled from Rockwell as each movie reel rolled passed the screen. A glimpse of his character in The Green Mile, after which Rockwell jokingly stated, “Tom Hanks – what a dick.” Rockwell quickly followed up, “Hanks, Barrymore, Clooney… they should teach on how to be a movie star. They are very generous.” Rockwell’s work with Clooney rolled past as we first saw him act with Clooney in Welcome to Collinwood, then saw him directed by Clooney in Confessions of a Dangerous Mind. Rockwell admitted is was a big battle for Clooney to get him the part of Chuck Barris in Confessions, “It made me feel like I had to show up in a big way.”

More films rolled by with Rockwell portraying completely different characters, yet each character was a bit twisted. Rockwell claimed to remember the lessons from each film and contributed his success to experimenting with other’s ideas and coaching. “I see a lot of theft in that” Rockwell stated after a clip of Snow Angels, “I see Michael Caine in Death of a Salesman.” Rockwell’s characters are a collection of anti-heroes that people come to love eventually. “A lot of my career is after life. Now it has a large cult following.”

Nominated for Best Supporting Actor for his portrayal of Officer Jason Dixon in Three Billboards, Rockwell remains excited about the character. He followed cops around and had them read his lines in preparation, again stealing ideas from their interactions for this character. He worked with an acting coach, and even filmed himself drunk to get more ideas, “I don’t recommend it, but it was a good learning experience.”

The evening came to an end as actor/director/friend, Clark Gregg came to the podium to give Rockwell his award. “Rockwell has the ability to make sketchy, odd characters relatable,” Clark said of his friend after sharing some intimate stories from their youth. “Sam makes everybody better. He portrays broken in such a way that connects us all.” Perfect timing for this important performance in Three Billboards, demonstrating why Sam Rockwell is Hollywood’s favorite anti-hero.