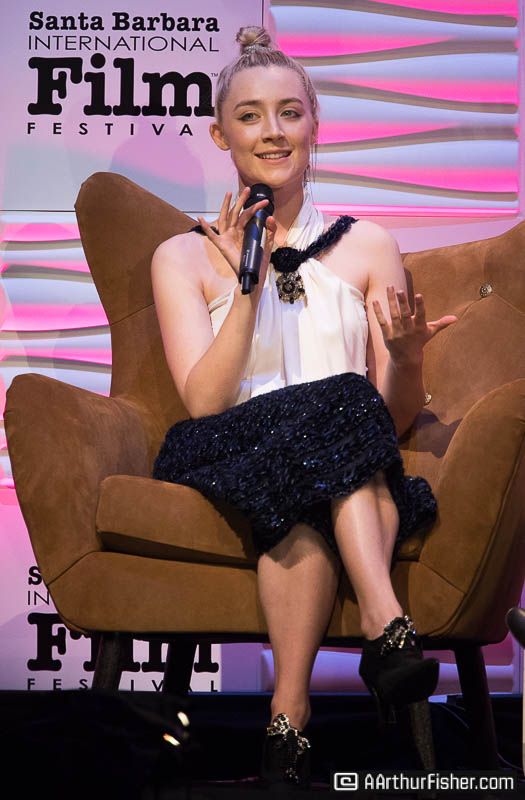 Written by Jennifer Strube on 04 February 2018 Posted in SBIFF Reviews.

“She’s probably the best actor of our time,” Robert Durling said in his introduction of Saoirse Ronan, who graced the red carpet of the Arlington Theatre Sunday evening just as Super Bowl LII brought a victory to Philadelphia. But this Irish-American performer needn’t compete with American football highlights. Ronan had already scored her own spectacular touchdown for her emotional performance in Greta Gerwig’s Lady Bird (2017).

Indiewire editor-at-large Anne Thompson moderated the evening, guiding the audience through Ronan’s film history. Yet Ronan is only 23. Chronicling her filmography is more akin to flipping through her childhood albums. The evening quickly became Ronan’s own coming-of age story for an actor known for coming-of-age roles. There was no shortage of love for Ronan in the room, who received a standing ovation and the coveted Santa Barbara Award, just weeks after her Best Actress catch at this year’s Golden Globes.

Good fortune was a common sentiment in Ronan’s journey to stardom. Born in the Bronx to a nanny mother and a construction worker father, she did not have the easiest start. However, the luck of the Irish soon settled upon her and the rainbow hasn’t left since. Her family returned to Ireland when she was three and while working at a pub, her father, who had never even seen a play, was cast in an art production. Ronan’s own acting career commenced when that cast needed a child. Thus, six-year old Ronan took the stage and immediately fell in love with acting. Several years later, Ronan discovered international film fame by happenstance, when her dialect coach brought her to a casting call for Joe Wright’s Atonement (2007). Ronan would later receive her first Oscar nomination for this role.

The grace did not stop there. Peter Jackson cast her in The Lovely Bones (2009) without having met her; he had only seen an audition tape. “I’ve been really lucky,” Ronan reminded the audience repeatedly throughout the evening.

Luck aside, Ronan’s brilliance is her fierce intelligence, while still remaining true to her youth. Her young age allowed her to be fearless, naively unaware of the magnitude of international success. “When you are a child, responsibility is rather non-existent. There is this uninhibited energy of a child,” Ronan remarked, that let her be free.

Praising her parents for their relentless protection of her spirit, Ronan also commented, “My mom is my hero. She encouraged me but kept me grounded.”

Before she was an actor, Ronan grew up with a fascination for dialects and American television. “It was a very cultured soap opera with my Barbie dolls,” she said describing her childhood fantasies, where her dolls donned many accents. She loved watching the Oscars, and when she received her first Oscar nomination for Best Supporting Actress in Atonement, she “was most excited because she got to be on the telly.”

Ronan went on to star in three other films nominated for Best Picture. Wes Anderson’s The Grand Budapest Hotel (2014) let her indulge in comedy, her favorite genre. “Things can get so heavy. It can become quite unbearable. You need to be able to laugh.” Brooklyn (2015) gave her the chance to explore her own immigrant heritage. “The character was close to my mother. To honor her journey moving from Ireland to New York was incredible.” Finally, Greta Gerwig’s Lady Bird (2017) gave her the opportunity to highlight the complexities of mother-daughter relationships.

“She’s a great filmmaker,” Ronan said of Gerwig. “There’s a sensitivity there… And none of us knew the reaction we’d get. It’s been such an incredible thing to witness so many people saying, ‘That’s me!’”

While past recipients of the Santa Barbara award include star-studded actors such as Isabelle Huppert, Sylvester Stallone, Jennifer Aniston, and Oprah Winfrey (just to name a few), Saoirse Ronan has officially grown and joined a list of giants.

With no end in sight to her good fortune and fame, Ronan’s will star next as Mary Stuart in the period film Mary Queen of Scots, followed by a film adaptation of Anton Chekhov's play The Seagull.

Keep your eyes on her, Santa Barbara. A powerful woman has just matured before our gaze and the world is eagerly watching.