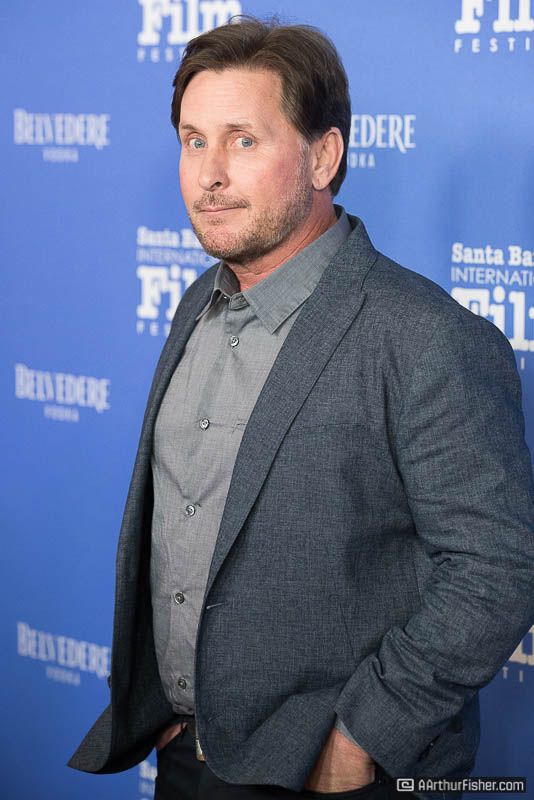 Make Some Noise- Opening Night at the SBIFF

When each of the notable actors, directors and writers took to the red carpet on opening night of the Santa Barbara International Film Festival, this beautiful city saw for the first time in two months, a celebration of coming together that was joyful and full of new hope.

The evening’s featured film, The Public, came at a time wherein Santa Barbara deeply needed a spirit lift. The Public’s world premiere couldn’t have been better placed. In the wake of the largest fire in the history of California and mere days after containment of the Thomas Fire, a mudslide tore through Montecito with fierce determination. Our iconic “72 and Sunny” Santa Barbara has not been the same since.

After welcoming the boisterous crowd to the 33rd Santa Barbara International Film Festival, Executive Director, Roger Durling, held his hand near a turquoise ribbon pinned on his lapel, tenderly repeating, “I wear this ribbon for…” naming each of the twenty-one people who died during the mudslide on January 9, 2018. “I wear this ribbon for the two children who are still missing and for the fallen first responder, Cory Iverson, who passed away during the Thomas Fire.” There was a solemn silence after each name was read. For too many who filled the Arlington from the balcony to the front row, these names represented neighbors, friends, colleagues, mentors, dear ones and losses that are still and will always be, utterly incomprehensible.

“This film, is about overcoming tragedy and coming together. I feel humbled to be in this film. I love this story,” shares Michael Williams who magnificently portrays a level-headed, honest man who is trying to honor his value of being free by choosing to live without possessions. “When he, (Emilio Estevez’ character) saw a hardship, he stepped up and made a difference in his community.” Emilio himself added, “This film is about real people and real struggle.” Santa Barbara County can relate so closely to these statements.

Estevez wrote, directed and stars in the film, The Public. Co-stars Alec Baldwin, Jena Malone, Christian Slater, Michael Williams and Jeffrey Wright each took a turn sharing their adoration and respect for Estevez. While on the red carpet, even Martin Sheen shared, “If you are lucky enough to get something that appeals to your spirit, these are the films that make you most proud. Emilio has accomplished this.”

The film, encircles inner-city hardships of homelessness, drug addiction and mental illness. Set in a Cincinnati public library in the middle of a frigid winter wherein all shelters are full and many who are homeless are left to sleep on the streets, The Public portrays a non-violent, though suspenseful, sit-in. The head librarian, played by Estevez himself, decides to be an agent of change and places his job, his security and even a new possibility of love on the line to stand up for those who are simply asking for a warm place to sleep. Threaded flawlessly throughout the film, a musical score by Che “Rhymefest” Smith that has you wanting to be part of the non-violent Occupy too.

There is a poignant moment in the film where those who have chosen to be locked inside the library for the night decide their voices should be heard. “Make some noise! Make Some Noise! MAKE SOME NOISE!” is chanted, stomped, drummed and yelled with a rhythmic pace that has everyone on the edge of their seats. These basic needs, that all of humanity shares, come vibrantly alive during this part of the film: to be heard, to be seen and to be understood.

When asked his opinion of the film and Emilio Estevez, Durling says, “I’ve always been a big fan of his, not only in front of the camera but behind it. This film is very timely and very thoughtful.”

Closing the film for the night, a musical piece that invigorates, written by Che Smith, “I’m looking for a miracle. Can you help me find it?” “Out of tragedy, comes miracles, big and small,” shares Estevez. The Public, is one of many beautiful miracles to grace our county again.

Last year, the independent film Charged, kicked off Opening Night of the SBIFF. This film reminded us to rise, because it’s just fear that has us limited throughout all of life’s most challenging moments. This year, despite great fear, devastation, overwhelming sadness and struggle, our community has risen. “The beauty I saw here last night and this morning…nothing can change that. I am truly humbled knowing the struggle that has existed here in this town,” emotes Williams.

We will continue to be inspired by the Santa Barbara International Film Festival. It is an annual highlight that holds so much meaning. Now, let’s make some noise. Because this year, we are reminded that we rise together and we can only elevate our community by standing up for one another during times of great struggle.