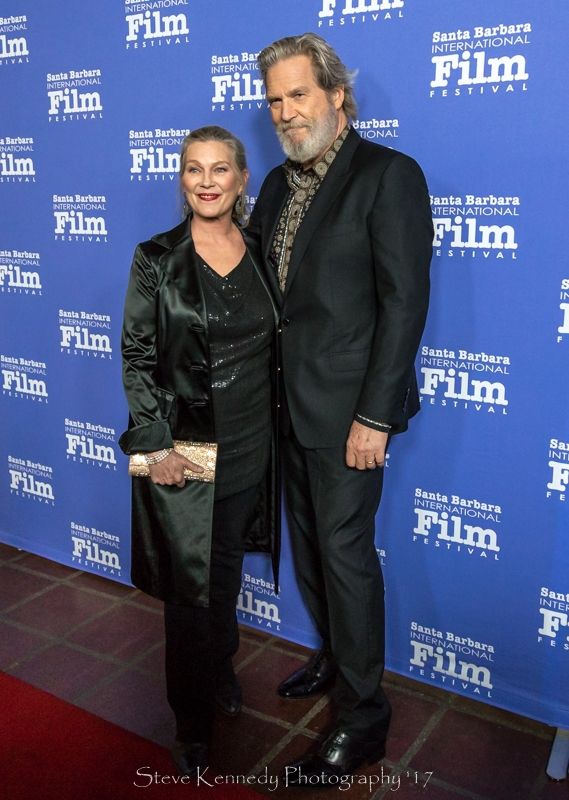 Written by Jim Youngson on 09 February 2017 Posted in SBIFF Reviews.

“Thanks for coming, guys!” a warm opening line from Jeff Bridges, friendly and sincere. Unrehearsed. Unpretentious. Without self-consciousness and totally relaxing.

That’s why the sold out crowd of admirers and locals love fellow Santa Barbaran Jeff Bridges, who received the American Riviera Award Thursday night, an award given to “actors who have forged their own path – taking artistic risks and making a significant and unique contribution to film.” Well stated and a perfect choice.

Jeff Bridges is one of the most awarded but under-appreciated actors of his generation. Perhaps that’s because he seems like he’s one of us, not an eccentric, artistic genius (think DeNiro or Nicholson) who you can’t imagine as a neighbor. No, he loves his hometown (since 1981). He’s involved. He’s accessible. And he’s totally comfortable with who he is.

From the looks of it, Jeff Bridges is living his life on his terms. He’s been so productive on so many healthy levels that his grounding must be firm, but his drive five star. He credited his 40-year marriage to his wife, Susan, for much of his professional success (they met in Montana on the set of that funny, odd film, Rancho Deluxe).

El Duderino abided for over 2 ½ hours to the Arlington crowd, cheerfully playing along in conversation with moderator and Hollywood insider Scott Feinberg.

There were some surprises, and that’s what makes these Film Fest evenings so special. For being such a relaxed guy, some close to Bridges say he’s more like the Starman than the Dude. Whoa.

Actor, musician, narrator/voiceover guy, amateur photographer, artist, humanitarian, one who practices Zen Buddhist meditation in the morning and riffing T Bone Burnet licks come sundown. That’s pretty Starman. (But hold on, his website is very cool, one the Dude would most assuredly approve of.) In the end, Jeff Bridges clearly came across as both, which probably explains the astonishing range he subtly displays in his acting.

Over more than 50 years, the son of acclaimed actors Dorothy and Lloyd Bridges who grew up in LA to Hollywood royalty has acted in so many fine films: The Last Picture Show, Thunderbolt and Lightfoot, Starman, The Fabulous Baker Boys, The Big Lebowski, The Fisher King, Tucker, Seabiscuit, The Contender, True Grit and recently Hell or High Water.

He’s played good guys, bad guys (Iron Man comes to mind), and is best with the morally vague or confused guy. That’s where most of dwell, being the complicated humans we are…so to play those roles are the most difficult. No matter how much his characters fuck things up, Bridges brings out their humanity, that core which tells us that they are – down deep – flawed and human.

For such a relaxed guy today at the youthful age of 67, many surprises emerged during the evening about his early years in the acting craft. Ambivalence gripped Bridges even after he’d been nominated for an Oscar at 22 for The Last Picture Show. Incredibly, he still wasn’t sure he wanted to be an actor for the long run. Other interests, such as music and art were calling, much to his father’s good natured dismay.

Even after ten films Bridges still had “anxiety, the fear,” when preparing, and that was part of his ambivalence. “I cared, I guess,” he said, then telling a story about how he learned from “those great old masters” Frederick Marsh and Robert Ryan on the set of The Iceman Cometh that even the most seasoned actors still get nervous. It changed his view about acting and he decided to commit, although “that anxious feeling has never gone away.”

Even if he’s always delivered, Bridges has been in his share of infamous, even bad movies. King Kong, Heaven’s Gate and the lost cause The Yin and the Yang of Mr. Go were highlighted. Here, “I learned an important lesson. As an actor, you really can’t protect yourself. You just have to go for it. It’s a communal art form here, and you’ve got to give it up to the director.”

Lastly, the actor talked about looking back at these celluloid characters that festival wizard Dana Morrow finely splayed across the screen. Bridges’ impressions: “The Dude is so dear. They’re all so special to me, aspects of myself.” Looking at it from that perspective, these are products of art, much like a song or a painting, that the creator can look back upon, perhaps like one’s children.

“Being a hometown boy this means a lot, I’ve got to say,” said the actor. And then to deflect further spotlight, he talked about his work to solve hunger worldwide, and making Santa Barbara a ‘no-kid-hungry-county.’ “Santa Barbara, what a community we’ve got! We’ve got such community spirit here. Great hangin’ with you!”