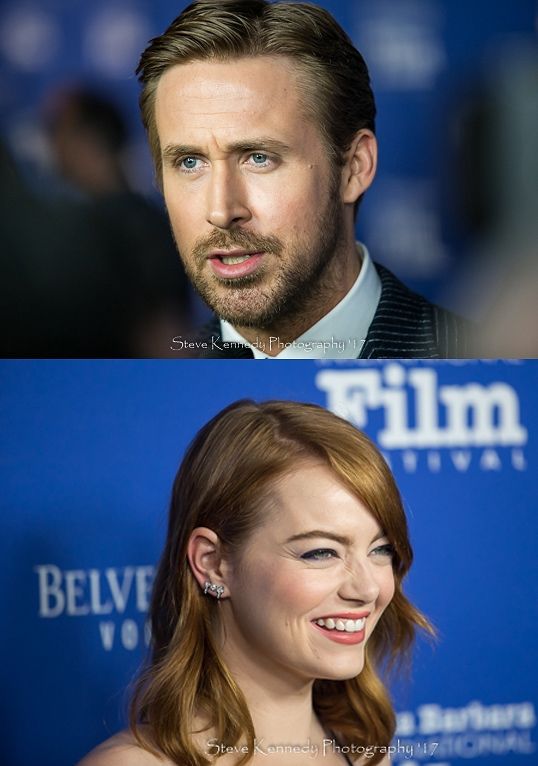 Written by Jennifer Strube on 03 February 2017 Posted in SBIFF Reviews.

It doesn’t take much to woo a sold-out performance into the Arlington Theatre to honor Ryan Gosling and Emma Stone for their cinematic feat of nostalgia and present-day fervor.

La La Land: a phrase first coined print in the Los Angeles Times in 1925, which has evolved to embody a sentiment of fantasy, bliss, and a reach beyond reality. Intricately tied to Los Angeles, the city of Hollywood hopes and romantic visions, the term La La Land has been recaptured anew by the depth of this film, blending cinematic imaginations with realistic endings where lovers don’t always live happily ever after.

“The point where your dreams meet the reality of everyday life is an overwhelming intersection,” said Roger Durling, the host of the evening, as he sat with Friday night’s co-stars. As with many films, La La Land invites its viewers into a form of escapism, giving its audience permission to feel deeply, which Durling stated is what truly “can change the world.” But La La Land has gripped us beyond the norm of many films, connecting with audiences in a way that such an invitation seems personal. Grown men now want to take tap lessons. Women want to wear twirling skirts. With a record-tying 14 Academy Award Nominations, including Best Actor, Best Actress, and Best Picture, La La Land has catapulted into the hearts of the American people, bringing hope that hasn’t been seen in years.

“It’s sad [musicals] are a thing of the past. There are no rules. You can express yourself through dance, song, anything,” said Gosling, who fawned over Gene Kelly’s films as a child and wanted to be a dancer. Stone, who grew up in musicals but didn’t think she could truly sing, loved the opportunity this film afforded her to dive three months into voice lessons, while Gosling fervently learned to play jazz music.

This duo is no stranger. Having collaborated in Gangster Squad and Crazy, Stupid, Love, the two have a long-standing chemistry that director and screenwriter Damien Chazelle dreamed of bringing to his film. Only 32, Damian wrote the script with them in mind, but his vision seemed lofty. “No one is more shocked than I am that they did this movie. I still pinch myself that any of it happened,” Damien said in his presentation of the Outstanding Performers Awards at the close of the evening.

And this is the beauty of La La Land. The film brought multiple people’s outrageous childhood dreams together to create a plausible adult fairy tale – which is no easy feat. Such alchemy required both intense preparations by the actors, as well incredible openness to change. Filmed nearly entirely in one-shot scenes, every actor, cameraman, choreographed move and musical note had to be perfect or else the scene was over. “It didn’t feel crazy,” remarked Gosling. “It just felt hard. And at the end of the day, it required luck.”

This theme of improvised magic, luck, and that magical space between laughter and tears became a theme for the evening, as Gosling and Stone discussed their joint careers and work together. “I dreamed of being part of a film that made me feel so not alone” said Stone. Ryan Gosling, in turn, remarked, “The choreographers were standing by the camera, cheering us on like a Care Bear countdown. Damien did just a wonderful job surrounding us with angels.”

“The rawness, the exposure, the vulnerability. There is no bigger special effect this year,” said Durling. “We look to you for solace. You are the vessels to dreams.”

So get dreaming, Santa Barbara. LA is only a Stone’s throw away… yet we now have a game plan for traffic. We just get out our dance shoes, jump on the car hoods, and fly.