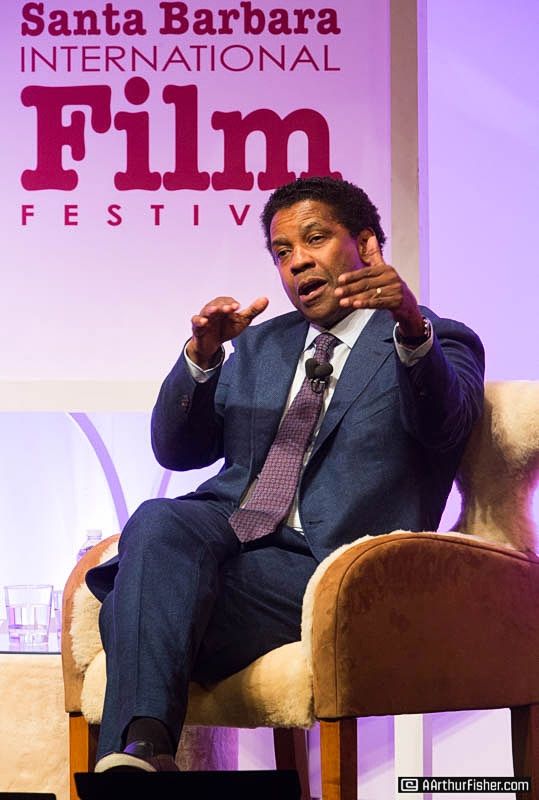 Written by Jennifer Strube on 03 February 2017 Posted in SBIFF Reviews.

From Scripts to the Screen: Modern Master Denzel Washington

“A dream come true,” was the sentiment on Roger Durling’s lips upon announcing the arrival of Denzel Washington to the Santa Barbara International Film Festival.

It was certainly a night of dreams, as film critic Leonard Maltin graced the Arlington Theatre stage for the 27th time to moderate the evening. With a standing ovation welcoming Denzel to the stage, the two conversed candidly about theatre, film, and finding the proper outlet for one’s artistry in the world.

“I was set on the t-h-e-a-t-r-e kind of theatre in my youth,” said Denzel. “The whole avoid-L.A.-and-make-$500-a-week kind of thing.” A pre-med student in his late teens, Denzel stumbled into acting while taking an elective class at Fordham University in the Bronx. Shortly after, he fell in love with the medium and completed classical training at the American Conservatory Theatre. Influenced by theatrical giants such as Sidney Poitier and James Earl Jones, Denzel’s dream took hold in 1981 while starring as Malcolm X in the off-Broadway play When the Chickens Come Home to Roost. When the hundred-person audience overflowed into thousands, Denzel felt at home. “The feeling of finding your place in the world, the buzz… not to say I’m a messenger, but I do the best I can.”

By 1992, Denzel’s career had already catapulted him from the stage to the cinema, where he received his second Academy Award nomination for Best Actor in Malcolm X. “I’d done the play, and I had the glasses,” Denzel joked, claiming the spectacles as the reason for his success. Yet stretching from the stage to the film came in multiple forms for this actor. Earlier in 1987, Denzel received his first Academy Award nomination for Cry Freedom, for which he commuted weekly from Los Angeles to Zimbabwe, flip-flopping between NBC’s medical series of “St Elsewhere” to an African film set. From theatre to television to film, Denzel pushed the boundaries of how acting is done, where good acting resides, and though what medium brilliance can best be presented.

The evening progressed with scenes from Denzel’s wealth of filmography, including box-office favorites such as Philadelphia (1993), Crimson Tide (1995), Glory (1989) and Training Day (2001), through which he won both Best Supporting Actor and Best Actor. Again, with his new film Fences (2016), the Academy will decide if Denzel will join the elite group of thespians to capture 3 Oscars -- making Denzel the first African-American to attain such theatrical accolades.

“I’ll admit. I did go into my office and talk to them last night,” Denzel confessed of his two shiny Oscar awards, which he keeps side by side in his home next to the college diplomas of his four children. “I used to think acting was my life. But when the first [child] came out, I realized that was life.”

A family man, an actor, and a master of the stage, Denzel now turns his face to directing and, more specifically, to acting in the very films he directs. “The August Wilson estate gave me his ten plays. It’s a gift, an honor,” Denzel remarked when Leonard Maltin asked him what was next. “We’ve done one play, and business has been good.”

“There is no one, nowhere more suited or more prepared to guard August Wilson’s legacy than Denzel,” said Steven Henderson, fellow actor in Fences who presented Denzel the Modern Master award alongside their ten-year-old co-star Saniyya Sidney.

“I’m in the service business now to bring Wilson to the screen,” Denzel commented upon his acceptance. “I’ll do everything in my power to see his scripts to the screen.”