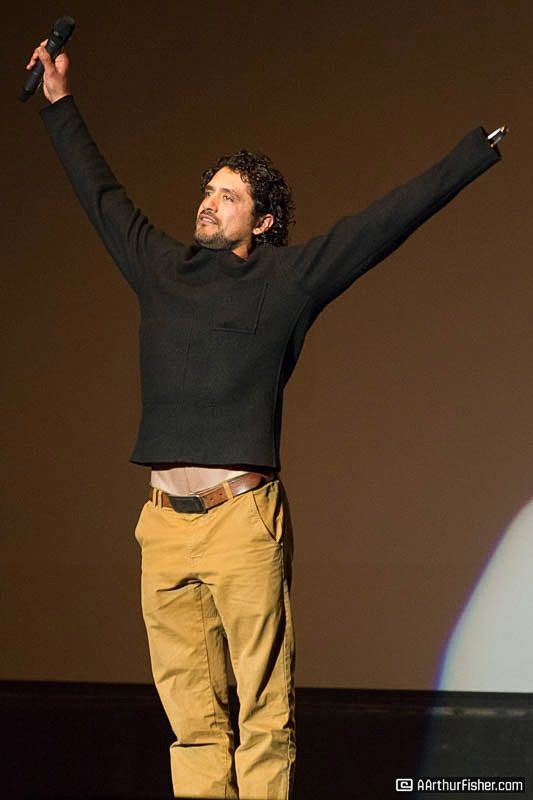 Santa Barbara knows how to throw a good party.  Last evening, with prismatic beams highlighting the façade of the Arlington Theatre, one of Santa Barbara’s most dynamic celebrations of the year began: Opening night of the Santa Barbara International Film Festival.  With 2,200 film enthusiasts, 700 volunteers, 50 countries represented and 200 plus films to be showcased, the SBIFF kicked off the first of an eleven-night festival.

As opening night began, a palpably vibrant energy could be felt.  A flurry of VIP’s traversed the red carpet.  Directors, actors, executive producers, composers and those brave humans featured in the films to be presented in the festival.  Iconic Santa Barbara locals joined the line to the left, including Father Larry from the Old Mission Santa Barbara.   He was as blissful, adorned in a festive beanie and scarf to be at the event as he is when he welcomes another Fiesta celebration at the front steps of the Mission. There was a hum and a bouldering line anxiously awaiting the featured film of the evening, “Charged.”

Derek Wayne Johnson, director and producer, and the entire crew from “The King of the Underdogs” joined the line-up.   “What drove you to create films?” he is asked.  “Karate Kid II.  It captivated me.  And I never looked back.  Producing this film, with this team… It has been so rewarding.  I am so thankful.  It’s like a dream come true.”  The world premiere for “The King of The Underdogs” is this Saturday and is sure to be a highlight for this year’s festival.

Lisa G. Black, executive producer of “Revenge” openly shares, “I am happy to be back at SBIFF.  I feel like it’s my home!”  And as Joanna Kerns, actress and director makes her way into the theatre, she shares, “Sometimes the film with the least amount of attention, is the best one for the story it tells.”

As the team, of  “Charged” enters the theatre corridor, between the red carpet and the wooden coffered ceiling, the crowd begins to cheer, the flashing camera lights are blinding and there is a current of dynamic proportion that connects all of us together.  Roger Durling, Executive Director of the Santa Barbara International Film Festival and Eduardo Garcia, chef, presenter and featured in the documentary, “Charged” embrace.  “Thank you for having us,” Garcia beams.

Honored to be the second documentary ever to open for the SBIFF, Director, Phillip Baribeau shared, “Sometimes, things just come to you.”  That is indeed the case with this potent film.  Originally intended to be a film documenting cooking in the outdoors, the focus changed when Eduardo was severely injured while exploring the remote backwoods of his Montana home.  Upon encountering what looked like the remains of a dead bear in a huge metal can, Eduardo touched the bear with his knife.  As 2400 bolts of electricity raced through his body, Eduardo’s world went dark.  And in the dark, Eduardo’s life began anew.  Executive Director, Roger Durling shared an emotional statement during the evening stating that, “We are all equal in the dark.”

Director, Phillip Baribeau with an extensive background in film and television, is no novice to visually breathtaking work.   “Unbranded” a film which won the Audience Award at the Telluride Mountainfilm USA Premiere in 2015, gave light to his unbelievable talent.,   “Charged” elevated the visibility to his outstanding artistic eye, as well as his foresight in the potency of sharing one’s story.

“Charged” captures raw human resiliency at its finest but it also portrays Eduardo’s most challenging human emotions as he works to uncover who he is and the depth of his relationship with long-time friend and business partner, Jennifer Jane.

The vast landscapes of the film coupled with captivating and soul-elevating music, would allow any film enthusiast a connection to resiliency.  That kind of warrior-mode, pound on your chest, grit- your- teeth-and-continue-on is so alive in this film.  Persevere.  Overcome.  Rise.

After months in a critical care unit, Eduardo learns he has testicular cancer.  A collective “Oh, no” was heard from the audience.  However, it is clear that this is where Eduardo begins to see his own authenticity come alive.  Jennifer Jane never leaves his side.  Both Jennifer and Eduardo’s way of being in a state of grace and gratitude allow us to see the many layers of human strength and possibility.

Eduardo never looks back.  He never hopes for a different future.  He never yearns for the life he had before extreme electrical currents sent into forty-nine days in an intensive care burn center.  Instead, his smile beams with presence and gratitude as he authentically lives his life.  Yes, this is the kind of resilience we all hope to achieve.   A truly riveting film, we are reminded, resilience is not innate.  We are not born with it. It is earned.  If faced with tragedy, would you succumb or would you surmount?

During the film, Eduardo’s eyes lower, and when they do, you sense he is re-centering himself.  He is remembering who he is, where his strength can overcome life’s trials and where he can be triumphant again.  Each and every time he looks down, his is affirming his place in the world, humbled and grateful beyond measure. Whenever Eduardo looks down, he rises.

This film inspires you to go after your biggest dreams but always with a visibility to your community for support and encouragement.  Eduardo gives abundant credit to all those family and friends who stood by him honoring them for their commitment to his health and progress.

Live at the festival, Jennifer Jane shared that recovery is not just one day feeling that you have overcome your obstacles, but rather that recovery means “A million little achievements.”  With a team such as this film’s, “a million little achievements” have already been reached.  In fact, they have already outnumbered a million.  “There is an undeniable power that exists, that when the sun rises, and when it sets, it is undeniable.  It is true.  It’s all that it ever is.  Its just that one thing.”  Eduardo Garcia.

With a tiny tea light in my right hand, gifted forward from the SBIFF executive director to all the film goers this evening, to show support for a world without hate and a world without borders, I noticed Eduardo leaving the theatre, a tiny light in his right hand.  “What does fear mean to you?” I ask and “What does fear manifest within you?” There isn’t even one flicker of light that occurs in the palm of our hands before Eduardo responds, “Fear is knowing what you want, but waking up and NOT going after it.”

This film embodies so much more than the “American Dream” and resiliency at their finest.   “Charged,” reminds us that authentically being that “one thing” that we are, can dynamically impact a million little things.

Tiny tea lights representing a powerful message danced in the hands of all those who attended last evening’s event.  They flooded State Street headed for… you guessed it, another epic Santa Barbara party.