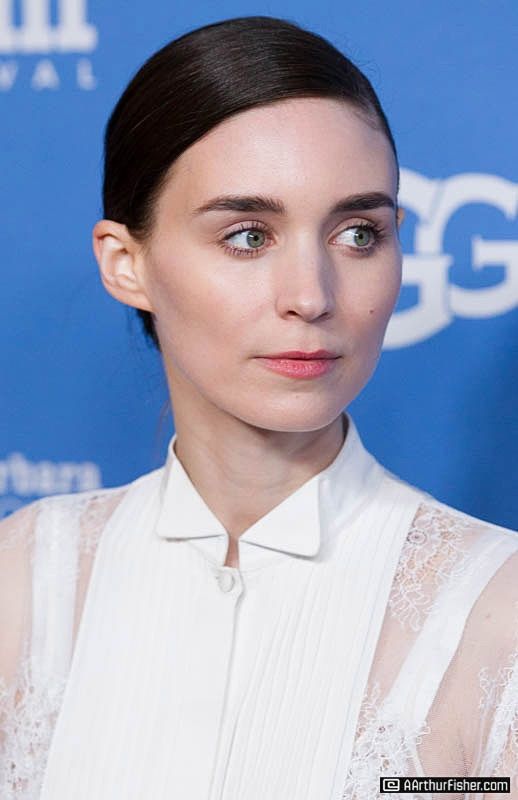 Written by Brent Bakeman on 13 February 2016 Posted in SBIFF Reviews.

Santa Barbara gets her first taste of The Girl with the Dragon Tattoo, Miss Rooney Mara is in position to take critics aside and just shine by her own lights – though she has few critics she will point out that occasionally she feels the pressure.

Tonight Mara comes to The Arlington Theater to accept the Santa Barbara International Film Festival's Cinema Vanguard Award, hosted by Roger Durling who introduced Joe McGovern from Entertainment Weekly as the Moderator. An interesting quote from McGovern in his introduction of Mara:

It became very apparent that there was truth to that statement as the interview and film clips progressed.

The thirty year old Mara has an interesting background, born in New York she is the great-grandaughter of both the Pittsburgh Steelers founder Art Rooney Sr. and New York Giants founder Tim Mara. Her great-uncle is the current chairman of the Steelers.

Mara's screen debut came in 2005 as the slasher in the film Urban Legends, many Mara watchers believe her breakout role came in 2009 in the independent film Tanner Hall. 2010 was a busy year for Mara with Roles in the remake of Nightmare on Elm Street, as well as The Social Network which is not so loosely based on the rise of the ubiquitous Facebook.

2011 brought Mara the role she is probably most recognized for The Girl With The DragonTattoo based on  Stieg Larsson's Millennium book series. For her role Mara received nominations for an Academy Award as Best Actress and a Golden Globe Award for Best Actress in a Motion Picture.

Since 2013 Mara has been a very busy lady; in that year alone she starred in the thriller Side Effects, the independent drama  Ain't Them Bodies Saints, and the sci-fi drama Her. 2014 brought the adventure drama Trash, and 2015 brought more acclaim for Mara in the romantic drama Carol, which garnered Mara the Best Actress Award at the 2015 Cannes Film Festival. A far departure from her violent, vigilante character in The Girl With The Dragon Tattoo, Mara had this to say about her character Therese Belivet in Carol:

“We are constantly plugged into this machine (speaking of our fast paced/ electronic lives), and disconnected, that's one thing I love about 'Carol' she is so pure and away from that”

Carol also brought her nominations for the Golden Globe Award for Best Actress in a Motion Picture, as well as the SAG, BAFTA, and Academy Award for Best Supporting Actress.

Mara also delighted the Arlington crowd with her human, almost vulnerable side, concerning the accolades coming her way:

Mara also charmed the good humored Arlington crown when she spoke of a director who would tell her a 'fart joke' to get her to smile more aggressively during a scene.

At the end of the Q & A came a short video clip from Cate Blanchett, fellow actress, friend and co-star of Mara's on Carol, followed by Mara's Cinema Vanguard Award presented to her by Carol director Todd Haynes.

Mara expects to be filming again in March, no doubt to the delight of her numerous fans, and as the SBIFF winds down, Mara's time spent with Santa Barbara and the Arlington can only be measured by two words; packed house.