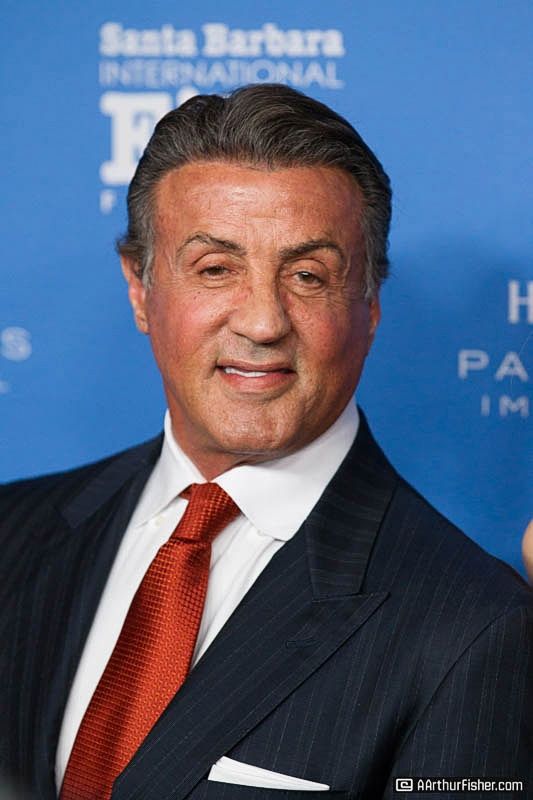 Written by Jennifer Strube on 09 February 2016 Posted in SBIFF Reviews.

From Hardship to Hero: Sylvester Stallone Speaks His Creed

“He wrote Rocky in three days and refused to sell it unless he starred in it.”

Need there be any further introduction for Mr. Sylvester Stallone, recipient of the SBIFF prestigious Montecito Award hosted by film critic Pete Hammond.

"It's great to see your hairline recede in Technicolor," laughed Stallone after watching his film history montage flutter by on the stage. Settling down into the plush chair for Tuesday evening’s moderated interview with Hammond, Stallone remarked, "You have to be grateful for what you've left behind."

Born to a lower-income family in New York, Stallone openly joked that his mother delivered him on a cross-town bus in Hell's Kitchen. When she found a clinic, the doctor's forceps severed baby Stallone’s neck nerve, the results of which gifted the world his deep, distinctive voice. "Maybe the doctor did me a favor." A fighter from birth, he was rejected for his first role in Woody Allen’s Bananas, until he returned to Allen several hours later with Vaseline-slicked hair, insisting he was threatening. Convinced, Allen cast Stallone as a subway mugger. "Vaseline – it takes care of all employment problems."

Much like Stallone's early life, his movies mirrored this underdog providence. "You learn from failure," Stallone remarked. "Success doesn't get you anything except an inflated sense of self-importance." With each of Hammond’s questions, Stallone shared nuggets of wisdom, from stories of living in his coat in the NYC Port Authority to sleeping on the streets.  "I want a better life for my kids, but there's something to be said about struggle." Throughout the evening, it was clear of Sylvester Stallone's kinship to the Rocky philosophy and his belief that no one is immune from hardship.

"Every generation has to define their heroes, the people that interpret their life." While Rocky premiered in 1976, its champion’s renown has spanned the decades, only to be revived in 2015's Oscar-nominated film Creed. Similar to Stallone’s own start, 27-year old Creed director Ryan Coogler approached Stallone with little film experience, asking for a dream. “He was a young student at USC, a man who wasn’t born until Rocky IV… It’s so great to take a chance and embrace your fears.” Forty years later, Coogler’s dream has now positioned 69-year old actor as the Oscar front-runner for Best Supporting Actor at this year’s Academy Awards.

Throughout the evening, the audience enjoyed clips from Stallone’s opus of work, including Rocky, Rambo, Rhinestone, Tango and Cash, Oscar, Cliffhanger, Copland, The Expendables, and Creed. And that’s just to name a few. All the while, Stallone slyly provided commentary, "I need subtitles. I don't even understand what I'm saying." As writer, director and actor, Stallone’s career intertwined with cinematic greats, from singer Dolly Parton and John Houston to Hollywood stuntmen before safety was regulated. “Back then,” Stallone laughed, “they didn’t care if you got killed. It was all handmade, and no one had ever done it so it was like, ‘Well, I hope this works.’”

Despite the humorous tone to the evening, Stallone made poignant remarks on the legacies of his filmography. Comparing Rambo to “a reincarnation of Shelley’s Frankenstein,” Stallone compassionately commented on playing a man with PTSD, in a time where thousands of men were monthly committing suicide upon return from Vietnam. He took ample moments to shroud the intelligence of his Rocky IV 6’5” Russian co-star Dolph Lundgren who, though known for punches that sent Stallone on a low-altitude flight straight to St. John’s Hospital “where four nuns appeared around the bed,” was also a Fulbright scholar with 4.4 GPA.

When asked if there would be a Creed sequel, Stallone shrugged. “I was just happy to be somewhat gainfully employed.” Looking out at the audience, he remarked, “If you look here long enough, you can see your whole life.”

The evening concluded with SBIFF’s Executive Director Roger Durling praising Stallone’s legendary performances. “For 40 years, you have given a voice to the outcast. I have the Eye of the Tiger because of you.” The Montecito Award was then presented by Carl Weathers, whose presence Stallone had personally requested. “This is one of the greatest honors I’ve had,” Weathers said, recounting his initial meeting with Stallone almost 4 decades ago. During his audition for Apollo Creed, Weathers read a scene with Stallone, who was announced as the writer of the film (not the lead actor). It was 5 pm on a Friday, and Weather’s performance was initially dismissed, to which he retorted, “Well, if you get me a better writer…” Needless to say, Creed was born. “I’m still convinced the only reason this man let me play this role was to beat the hell out of me.”

While there won’t be a rematch, the Arlington stage did reunite these heavyweight champions once again. “If this is the end of Rocky, it’s a beautiful ending,” Pete Hammond smiled.

When I asked Carl Weathers for his thoughts on the duo’s legacy, he remarked, “No matter where I’ve gone in the world, Rocky and Apollo are the indelible images that people have loved. It speaks to the gladiator in all of us and how important that really is.”

“We are all underdogs, not being realized in our lives,” Stallone added. “All part of the human experience - this universal quest for peace of mind until we have a dream… ‘What is my full potential?’ That was the birth of Rocky.”

We are with you Stallone, standing on the steps of the Philadelphia Museum of Art in our grey sweatpants, cheering you on for the Oscar. Thank you for cheering for us.