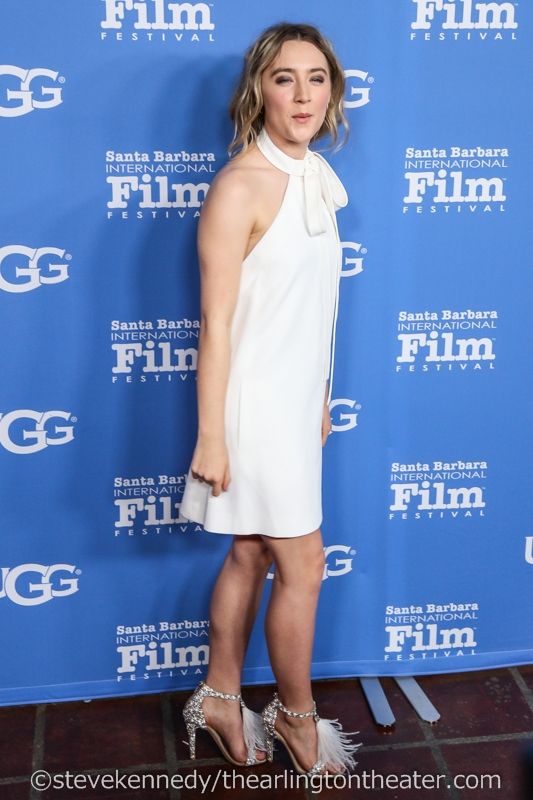 Written by Brent Bakeman on 08 February 2016 Posted in SBIFF Reviews.

A Santa Barbara Evening With Brie Larson and Saoirse Ronan

The very cool blue and hushed crowd inside the Arlington Theater contrasts with the flashes, bright lights and energetic voices of those on the red carpet outside. The Arlington is as beautiful as ever, and many of Santa Barbara's cinematic purists have packed the theater to see Brie Larson and Saoirse Ronan receive the Outstanding Performers of the Year Award moderated by Pete Hammond.

Despite their youth, ages 26 and 21 respectively, Larson and Ronan are quite accomplished and professional, making for a lively discussion with Hammond at the helm.

Brie Larson for tonights event was skyped in on the big screen as she was about to board a plane bound for Australia for the filming of Kong. She began acting as a teen and is also an accomplished singer having released an album Finally Out Of P.E. In 2005 and has also directed two short films. Amongst Larson's accolades include nominations for an Independent Spirit Award, Critics Choice Award, Canadian Screen Award, and an Academy Award for Best Actress. She has also won a Golden Globe, A Critics Choice Award, and the SAG Award. She frequently works with Woody Harrelson and had some fun with Hammond tonight of a penchant for 'dark' productions of late, but countered with her earlier work with Disney and numerous sitcoms. Kong: Skull Island is set to be released in 2017.

Ronan, born in the Bronx – she was quick to point out tonight to Hammond 'not Brooklyn,' but raised in Ireland and has a fairly strong Irish accent; however she is quite adept at disguising it when the role calls for that. Quite accomplished for her 21 years she was nominated for her first Best Supporting Actress Academy Award at the age of 13 for Atonement. Her second would come in 2015 delivered by the film Brooklyn. Ronan has also branched out to Broadway, debuting next month in The Crucible. Ronan probably received the best compliment of the evening when her friend Larson, before signing off from Larson's Skpe interview as ronan was about to take the stage said, “To all of you who get to be there with her, you’re the luckiest,”  A fitting tribute to a talented young actress who stated in the Arlington concerning her acting success that when growing up “..imagination was all I had.”

As momentum builds for the Santa Barbara International Film Festival becoming one of the worlds premier film festivals tonight Brie Larson and Saoirse Ronan certainly did not disappoint. Santa Barbara being the festive town which she is was met with a pair of equally festive and talented actresses whose charm and enthusiasm was matched by the beauty of the Arlington and the eager audience within.