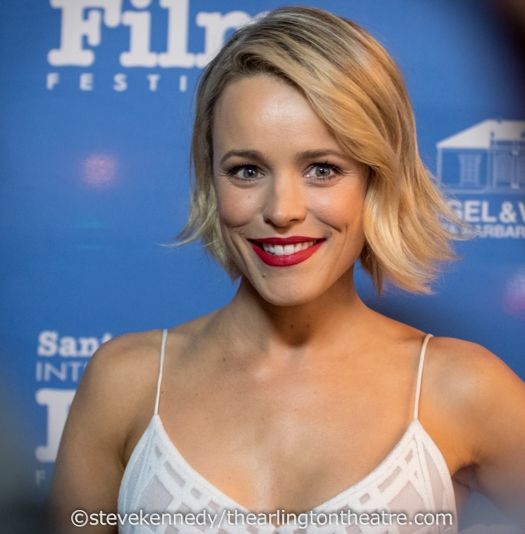 Written by Jennifer Strube on 05 February 2016 Posted in SBIFF Reviews.

Let the Truth Be Told as "Spotlight" Shines

The American Riviera Award honors actors who have taken artistic risks while making significant contributions to the film industry. It is no wonder then that Friday night’s award recipients were none other than Spotlight’s Michael Keaton, Rachel McAdams, and Mark Ruffalo (who attended via a pre-recorded message). “This is a blessing, the fact that I get to do this,” Keaton said as he took the stage. “Tom assembled a group of actors who had a conscientious about them, and we came together as a team because those guys were a team.”

The “guys” of whom Keaton referred were none other than journalism greats Sasha Pfeiffer (who also attended) and Boston Globe’s Spotlight Team Editor Walter “Robby” Robinson. Sasha, played by McAdams, and Robby, played by Keaton, illuminated the screen during intermittent clips from this year’s Oscar hopeful. In talks of authentic acting and candid journalism, Durling orchestrated the evening into a soiree on authentic storytelling.

“Rachel has such appeal. She is absolutely honest every time,” Keaton said. In response, Rachel replied, “If you can get to the emotional center of a character, and if you know your lines really well, you are safe enough to go anywhere.”

How does one create enough safety to tell the truth? In a poetic cycle, Roger Durling interviewed actors who posed as journalists in search of survivors’ hidden truths. And so the cycle continued. The genius of Spotlight was this very rhythmic candor. Spotlight is an honest film about honest journalists asking survivors to tell their honest story -- with the hopes that anyone seeing such bravery will find their own sincere freedom.

It’s safe to tell the truth. As actors. As survivors. As audience members.

“When you are dealing with real news or journalism, it’s humming,” Keaton said. “There’s a frequency. It is happening. That’s a turn on to me… It doesn’t matter how crazy it is. You have to tell the truth.”

The Academy and Vatican response could not have been better for this film. Nominated for six Oscar nominations, including Best Picture and Best Supporting Actor and Actress, Spotlight’s impact has spread beyond Hollywood and into the inner sanctum of Rome. The Pope himself organized a private screening for the Vatican Commission as the appetizer for the Commission’s three-day symposium this very week. According to The New York Times, the Vatican radio has praised the film as “honest” and “compelling,” grateful for its candidness of such long-avoided wounds, which is why Roger Durling so rightly remarked, “When artists take a cause and expose it to the masses, it changes things.”

The evening concluded with Spotlight’s director Tom McCarthy presenting the award to this thoughtful trio. McCarthy, himself nominated for Best Director and Best Original Screenplay, was not short of kind words to honor both this Santa Barbara evening and his talented film cast. Thanking Roger Durling for being a “courageous survivor,” he touted Mark as the “vibration of the film. Rachel, she was our heart. And Michael, I hope you all individually have the chance to spend one minute with him… He’s so damn exciting.”