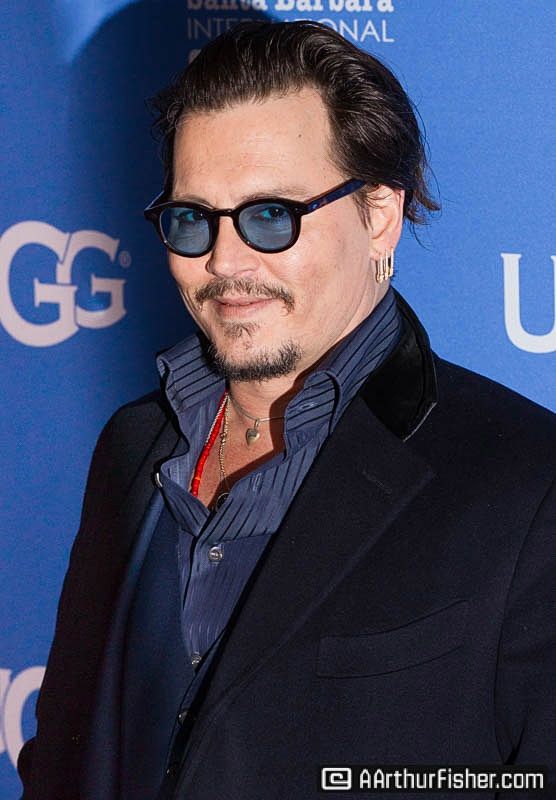 Written by Jenny Schlax on 05 February 2016 Posted in SBIFF Reviews.

The word on State Street is Johnny Depp was spotted disguised as a street person sitting on a bench across from the SBIFF Hub the first day of the Santa Barbara International Film Festival, taking it all in incognito. After seeing the shy actor accept the Maltin Modern Master Award on Thursday night, I believe that this was probably a true sighting.

Arriving late to venue, Johnny Depp graciously attended to his fans and accepted gifts on the red carpet, then quickly disappeared into the Arlington. Usually the recipients of the tribute awards sit amongst the general public in reserved seating; however this was not the case for Depp. Swept away to a back room he was guided to an area to watch as Leonard Maltin, for whom the award is named, introduced a montage of Depp’s “enduringly popular movies.”

Edward Scissorhands, Fear and Loathing in Las Vegas, Black Mass, Dead Wood, Don Juan DeMarco, Blow, Chocolat, Pirates of the Caribbean, Sweeney Todd all merged together in one great accolade to the actor with over 40 movies to his credit.

Almost reluctantly, Depp made his way on stage from the side curtain, receiving a standing ovation. He stopped and claimed, “Now I stand for you,” before taking his seat next to Maltin. “This is not my favorite thing to do,” he admitted. “I have no idea what I am doing here; that [montage] was ludicrous.”

Maltin got right to business talking about Depp’s transition from TV star to Film star. “Playing the same character for 9 months out of the year can really make you insane – it didn’t affect me…” Depp said with at sly grin. “It was to pay rent… and I was never a good salesperson. I tried to get fired – a lot!” Depp considers himself a musician first and acting on a television show was not remotely close to what he strove toward. And why? “The best question in the world to anything is ‘why?’ Why – ha!” Depp’s exclamation was met with an awkward silence.

“Oh God, " bemoaned Depp, "More clips?!” as Maltin went into the first set of the night. Depp turned away and talked to Maltin throughout them, obviously not comfortable watching himself on screen.

As more clips and discussion around the films emerged, funny stories were craftily pulled from Depp by Maltin, a great gift of the moderator. On the film What’s Eating Gilbert Grape, Johnny admitted he had been going through a hard time. Depp pondered if the funk was necessary to play the part of Gilbert Grape, or just a coincidence – a question an actor often has to answer. On co-star Leo DiCaprio, he joked, again giving the crowd a sly grin, “He’s grown! Have you seen him?”

Moving on to Don Juan DeMarco, Depp contemplated the perspective of reality. “Who’s to say… what’s real to one? Who’s to say?” It was here he fell in love with his idol Marlon Brando, forging a friendship that would last a lifetime. “I liked playing opposite Marlon Brando and I’m playing the crazy one. How often does that come around?” Depp’s voice softened when he spoke of Brando, telling us that he was not what people thought; Brando was all about justice and equality. “There’s a saying that you should never meet your heroes… I’ve met every one and I’ve never been let down.”

Depp’s choice to do the Disney film Pirates of the Caribbean arose from the non-stop cartoon marathon he was subjected to once he had a child. “How can I make a live action performance within the parameters of a cartoon?” In cartoons you accept the absurd as reality, you don’t question how Wyle Coyote only needs a band-aid after a 1200 pound bolder falls on his head, and this is what Ed Wood called ‘a suspension of disbelief.’  So he tried something different, and made Jack Sparrow a more comical character – and almost got fired! Again.

His first and only attempt at directing resulted in the film, The Brave, starring Marlon Brando. Depp was proud to watch what Brando gave to him, but found it difficult to be both star and director himself. Depp holds the right to the film domestically and claims politics, and then the passing of Brando, prevented him from releasing it in the US. However, after much prodding from Maltin, Depp promised to screen the film at next year’s SBIFF and sealed the agreement with a gentleman’s handshake.

More clips emerged, and it was obvious Depp’s talents easily ranged from comedy, to drama, to mockery, and to musicals. Depp divulged he takes influence from everything, “Why be rigid with any education? Take it from everywhere!”

As the night came to an end, Scott Cooper, director of Black Mass, presented the Maltin Modern Master Award to Depp. “Besides his awe inducing performances and cinematic brilliance, it is his deep humanity that sets him apart,” Cooper acknowledge. “There is no one like Johnny.”