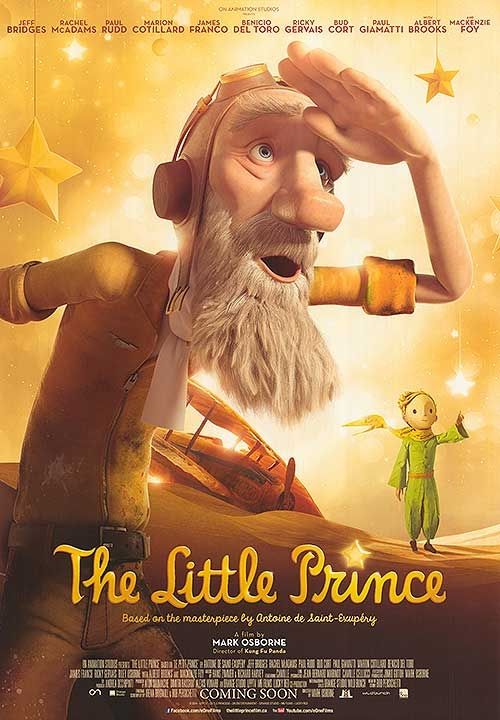 Written by Jennifer Strube on 04 February 2016 Posted in SBIFF Reviews.

US film premiers easily conjure up images of Hollywood stardom at its spectacular best, and the opening night gala of the 31st annual Santa Barbara International Film Fest did not disappoint. A camera-lined red carpet full of glamour and gowns brushed shoulders with expectant film fans, eagerly awaiting cinematic bliss.

As whispers of Oscars and pending awards spread throughout the Arlington terrace, one could not help but be enraptured in the up-and-coming excitement. Yet in this buzz of the latest and greatest, a film emerged that invited us, not forward, but back into the nostalgia of our childhood fantasies.

Directed by Mark Osborne, The Little Prince is the first ever animated feature film adaptation of Antoine de Saint-Exupéry’s beloved masterpiece. While the French book is set on intergalactic planets full of roses and desert foxes, Osborne’s film spans the stars with the suburbs. Part of the film is set in the childhood text, while the other half is set in “real life.” In this combination, Osborne twirls fantasy with animated realism, pairing the book’s eccentric Aviator (voice by Jeff Bridges) as the neighbor to a precocious Little Girl (voice by Mackenzie Foy). Soon after, the book itself becomes a character in the film, swirling the audience into the mature reality of this childhood delight:

That this story is not written for children at all, but for adults in need of their wisdom.

Ah, the wild beliefs of our youth. The longing of the heart. The yearning for all that is possible. Aren’t these notions so lovingly passé and cliché?

It is not surprising then that Osborne, in his introduction of the film, revealed that his children were his truest artistic inspiration. Just then, the lights shifted low, as the film’s began with the words, "Grown ups. They never understand anything by themselves."

Indeed, this film was led by little ones, with The Little Girl (Mackenzie Foy) and The Little Prince (Osborne’s son Riley) fjording the way. Barely beyond childhood herself, Mackenzie graced the Arlington Theatre with the poise of a sage, whirling past the paparazzi and pausing to inform me that "childhood imagination" was her real vision for tonight. Childhood imagination: a concept difficult for her character, The Little Girl, whose mother frantically grooms her for prep schools, schedules, and an Excel-driven-spreadsheet-kind-of-life. Which is all fine and good until Foy meets the quintessential anti-grid: the mad scientist Aviator (Bridges) with his crooked little house and unswerving dreams of flight options.

When a film is made about a cherished childhood book, it naturally beckons the audience into wistfulness. Yet in those hazy sunsets, The Little Prince whispers directives to "Never forget any of it. Promise?" Soon, we all find ourselves making vows alongside the Little Prince, promising to remember. The movie, like the book, is bursting with poetic takeaways and proverbs, contrasting an adult insistence on certainty with a childlike belief of curiosity and wonder. Take, for example, the opening interview scene of The Little Girl, nervously approaching the podium at her prestigious prep school Werth Academy, where the interview committee asks her their branded Essential Question:

What do you want to be when you grow up?

The Little Girl, although well matured into the adult land of To-Do lists and alarm clocks, is stumped to respond. Werth Academy’s Essential Question reverberates throughout several scenes in the film, alluring us all to contrast what we wanted to be as children and who we have now become.

When I asked Roger Durling what he hoped this film would bring to this year’s SBIFF, he remarked, “A tone of inclusivity.” True, The Little Prince acts as a poignant reminder that great films are for people of all ages. Yet the inclusive genius of this film extends beyond generational gaps and into our own divided hearts, inviting us to embody the little prince (and princess) inside us that we have maturely forgotten.

"Growing up is not the problem,” the Aviator in the film tells The Little Girl. “Forgetting is." As children, we knew who we were. We were world-changers and scientists, actors and artists, astronauts and debutantes. Yet somewhere, we pocketed these truths. We secured up our feelings and set our faces like flint, while meanwhile, somewhere in the asteroid netherlands of B-612, still sits The Little Prince, waiting for us to remember.

The Little Prince not only asks us to return to a beloved childhood tale but to revisit our very best selves. To gather our magnifying lenses and penny collections and become curious adventurers again. To recall who we were before grades and degrees – life with full open hearts, risking pain, trust, and love. Films give us permission to do this. “This book is written to the child that we all once were,” Osborne reminded us tonight. And by remembering these young parts of ourselves, we can become, in the words of the Aviator (Bridges), “very good grownups.”

Scientists tell us that when we see starlight, we are actually looking into the past, as it takes light years for the brightness to penetrate our gaze. And that is exactly what happened on Wednesday’s opening night. The Hollywood stars arrived into a seaside Santa Barbara, bringing with them a prince, his planet, and a past we will never forget. How wonderful we have ten days of cinematic wonder ahead to relish in such remembrance.