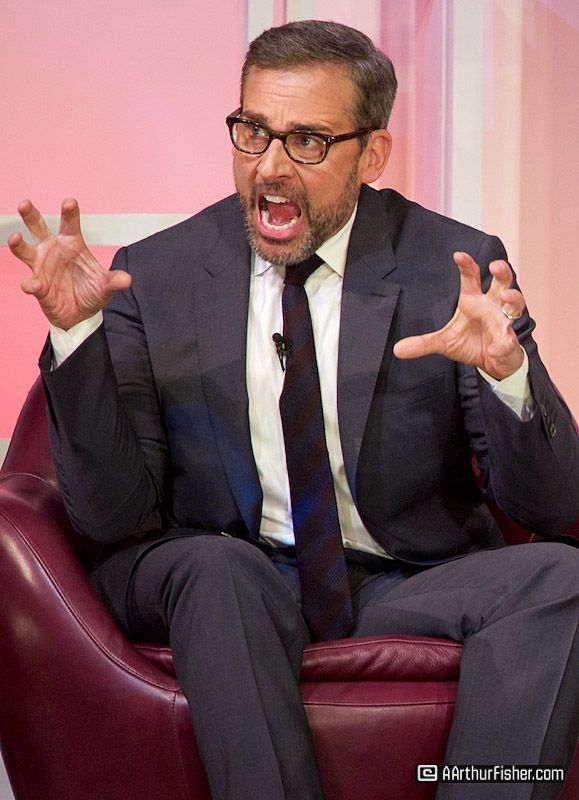 Written by Sabrina McCarley on 12 February 2015 Posted in SBIFF Reviews.

So Much More Than Just Normal and Nice

Yet another sold out crowd filled the historic Arlington Theatre for Santa Barbara International Film Festival's 2015 Outstanding Performer of the Year tribute. What’s so special about this particular crowd, you might ask?

It’s the fastest sellout evening in the history of the festival.

Academy Award Best Actor nominee, Steve Carell, just might be “the nicest most normal person in the world.” He wonders why people are so astonished that actors could be normal. Then again,  just as the lights went down in the theater, a few excited hecklers belted random lines from The Office; without a beat, Carell stood up from his seat near the front of the theater, turned toward the hecklers and shouted, “shut up!” and brought the entire audience to laughter.

Deadline film critic, Pete Hammond, moderated the evening and brought Carell on stage to hoots, hollers and post-wax shouts of Kelly Clarkson, which only settled down only after Hammond started rattling off a series of accolades that Steve has collected over the years.

From Andy Stitzer The Forty-Year-Old Virgin (2005) to Michael Scott The Office (2005-2013), Brick Anchorman (2004) to Gru Despicable Me (2010), Frank Little Miss Sunshine (2006) to Barry Dinner for Schmucks (2010), Cal Crazy, Stupid, Love (2011), and Trent The Way Way Back (2013), Carell’s characters reveal a rare versatility in talent that is difficult to match. “There’s this human-ness, this risky, edgy, funny, dramatic element…all your characters are laced in reality,” notes Hammond. In Carell, we are reminded of Jack Lemmon's prodigious ability to play the moment, to walk that thin line between comedy and tragedy.

Each new role Carell embarks upon exposes yet another facet of his talent, just as a gem catches light with each turn. But as previously mentioned, not all roles are so shiny and bright. Most recently of note is Bennett Miller’s hauntingly dour Foxcatcher (2014), which earned Carell his Academy nomination and for which he is honored here.

Yes, we laughed our faces off through Andy’s awkward bobble into sexuality. We crooned over Gru’s newfound fatherhood and fell over, gasping in response to Brick and his love for all things inanimate. But true talent lies in the ability to become a character, which is just what Carell does so well. “I don’t think a character knows they’re in a comedy, in a drama. A character doesn’t play it that way”.

The former Dennyson University, morning DJ, known as “Sapphire Steve” now a top 50 highest-grossing actor, stays grounded through “isolating and encapsulating small moments”, moments like running up the stairs in his home to rejoice with his wife over his Oscar nomination, only to meet her running down for the very same reason.  “I tend to set the bar really low for myself,” joked Carell who doesn't like to set “far-reaching goals.” His subtle charm and humility only add to our cache of admiration for this actor.

It is impossible to shotgun one's way through the SBIFF's clever montage of elemental scenes from Carell’s reel of powerhouse films and not be reminded of just how textured, how unique, and versatile Carell is when performing in front of a camera.  Carell is clearly another rare and sublime when someone’s unique and exceptional abilities are matched with precisely the right career.

Many women in Santa Barbara might have fancied a rumor that Foxcatcher co-star, Channing Tatum, would present the night's award to Carell. Yet, it was Alexander and the Terrible, Horrible, No Good, Very Bad Day co-star, Mrs. Jennifer Garner who had the honors.  Her snarky and amusing introduction  offered us all a glimpse into her kinship with Carell speaking of how “he is simply too good to be true.”

Not to be outdone, Carell  presented Garner with her own “#1 Winner” award, before poking a little fun at himself  and awards for acting in general by announcing that , “finally, everyone agrees that I am a genius!”

Bidding us adieu with a token line from The Office, Carell  concluded the evening’s festivities with a familiar, “thank you for coming,” to which the audience, in unison, responded, “that's what she said!”