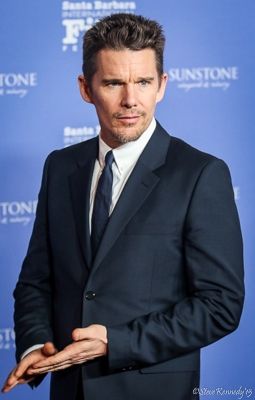 Written by Jenny Schlax on 06 February 2015 Posted in SBIFF Reviews.

The American Riviera Award was established to recognize actors who have had a strong influence on American Cinema. The two iconic actors honored this night by the Santa Barbara International Film Festival exemplify the spirit of this award.

Patricia Arquette and Ethan Hawke are being celebrated for their performance in Boyhood, a film with six Oscar nominations, including Best Picture, Best Director, Best Supporting Actor, and Best Supporting Actress. This is the first time this award has been given to two recipients in its twelve years of existence. According to the night’s moderator, SBIFF Executive Director Roger Durling, either of the two could have won the award on their own.

Rising to stardom in the '90s, both actors were the voice of their generation. Between them they starred in such iconic movies as Dead Poets Society, Reality Bites, True Romance and Flirting With Disaster, all of which epitomize the '90s. Over the course of their respective careers, they have had the opportunity to work with many of the most reputable directors, writers, and actors. Hawke shared that he had seen many actors burn out over the years, not just from drugs and alcohol, but from their creative flame, including the recent loss of Hawke’s co-stars Phillip Seymour Hoffman (Before the Devil Knows You’re Dead) and Robin Williams (Dead Poet Society).  “I don’t know what it is about creative people and the inability to find balance in their personal life,” Hawke stated, choking up over the memories.

As their careers grew, they both were able to take ownership of their craft and their careers. Arquette was able to use the power of her name to oppose TV executives that wanted her to lose weight for her role on the TV series Medium.  “I simply said 'No'. It didn’t make sense. My name meant enough that I brought power to the show, I didn’t have to make concessions. I am sick of the conversation over weight, we should all be over it.”

All the while, they were making Boyhood. The film has received much acclaim and has done well at the box office, but Arquette was not without her doubts. “How are you, one, going to get the funding for a twelve-year project; two, sell a normal story that has no drama; and three, have actors stay on for twelve years that have no contracts (contracts max out at 7 years).” It was a big risk, but one that paid off.

“Boyhood is a selection of scenes that would have been cut out of any other movie,” claims Hawke. Hawke is most proud of the movie because it normalizes kids growing up in a divorced household. It’s a regular, simple story that replaces plot with time and shows that “regular life is awesome.” According to Arquette, “This movie is low tech, literally shot in time. It shows that audiences are ready for a lo-fi connection.”

The American Riviera Awards were presented to the two by their Boyhood co-star Ellar Coltrane. During his presentation he said he saw both of them grow as actors, even though he wasn’t aware of it at the time. “Both of you refuse to be ingenuine (sic) to yourselves. Watching you guys here tonight – you never ceased to amaze me.”

Hawke claimed recognition creates an imbalance in one’s universe. But it is good to see two of Hollywood’s most influential actors work so hard towards maintaining that balance.