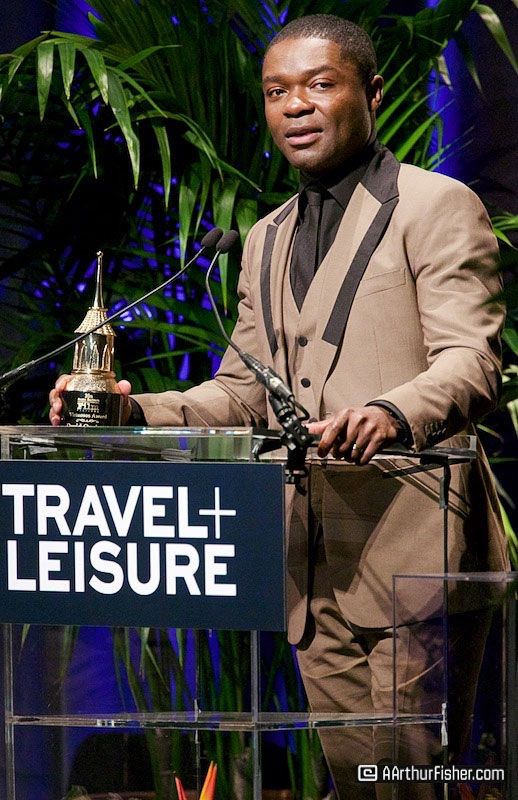 Written by Jennifer Strube on 02 February 2015 Posted in SBIFF Reviews.

The Virtuosos Awards: When Breakthrough Breaks You Open

“Up-and-coming actors who have achieved a breakthrough performance.” According to the SBIFF, this is the definition of a Virtuoso.

Sponsored by Travel and Leisure and Delano Las Vegas, the Virtuosos Awards are a night to celebrate talent beyond measure, and Sunday evening at the Arlington was no exception. In an evening moderated by Dave Karger, chief correspondent for Fandango, seven rising actors took the stage for their fifteen minutes of glory. And interviewing. Among them were honorees Chadwick Boseman (Get on Up), Ellar Coltrane (Boyhood), Logan Lerman (Fury), David Oyelowo (Selma), Rosamund Pike (Gone Girl), J.K. Simmons (Whiplash), and Jenny Slate (Obvious Child). Individually, each actor sat in the plush chair next to Mr. Karger, as he picked the recesses of their creative genius about their breakthrough performances.

But what, in truth, qualifies a breakthrough performance?

To start, one must have breakthrough fans. While the rest of the world gathered around their televisions for the American lure of Superbowl fame, diehard film fanatics packed the Arlington Sunday evening in hopes of seeing artistic greatness.

And they were not disappointed in the half-time show.

The evening read like an “Intro to Fame 101” course and although Karger questioned the nominees on a variety of topics, each actor spiraled back with their own account of breakthrough, although the word barely graced the stage that night.

Yet the definition did.

Breakthrough begins with passion. Just heed the words of Chadwick Boseman, remarking on his role as James Brown.For Boseman, playing the mastermind of Mr. Brown in Get on Up was not a job; it was a possession. “You go to sleep with the song on and you wake up the next morning and the song is still playing and so you were technically working all night.” And that is how Boseman preferred it, pouring his whole life into his art. Time spent filming was time spent living. “You want to be able to look back at your films – those 2 months, those 6 months - and you want a challenge that’s changed you, as that’s your time.” So live life well.

Resiliency was another theme that emerged, particularly through the musings of Ellar Coltrane. An actor’s dream, Coltrane was hand-scouted by a talent agent at age 5 and cast in his role in Boyhood, a film that met for 3 days a year for the next 12 years. During this time, Coltrane personified the character of Mason, a boy who coped with an alcoholic and abusive stepfather. When asked how he processed such violence at such a young age, Coltrane remarked, “When you are a kid, it’s easy to forget something. It doesn’t seem real.” With such words, Coltrane reminded us of the tender tightrope that child actors must walk – bringing true emotions into life’s dark shadows by delving into situations of which they still are naive.

Too young to be so old. These deliberations echoed in the talk with Logan Lerman, who, in the words of interviewer Dave Karger, “threatened the director that he would starve to death” in order to get his role in Fury. And if starving for art wasn’t a grown-up enough ambition, ferocity was. Playing a young soldier alongside Brad Pitt in a WWII film that chronicled a 24-hour period, Lerman found a “loss of innocence in a hyper-speed of time.” Even the rehearsals themselves turned violent, with actors choking each other off-camera after shooting a war scene. “You learn a lot about your personal limits and what happens when you break through.”

Break through. There! We heard it, or at least the verb version. But was this a definition or a consequence?

David Oyelowo recognized his consequences. As Dr. Martin Luther King in Selma, death was the result of his breakthrough performance. Echoing the passion of doctor himself, Oyelowo preached from the Arlington stage, “We, as black people, have been celebrated more for times when we are not being leaders or kings or in the centers of our own narrative… yet we have changed the world.”

In a role that couldn’t be more opposite than an icon of peace, Rosamund Pike converted into a surprise murderess for her role as Amy in Gone Girl.  While many actors relish the character challenge of a revealing a secret incontrollable vice, personifying madness gets under one’s skin – so much so that Pike conceived a child soon after the film ended. “You bring a lot of unpleasantness into the world playing Amy, as she is never relentlessly herself… I needed to be relentlessly myself and bring an innocent being into the world.”

Relentless madness and innocence lost: themes that reverberated again in the musical genius of J.K. Simmons in Whiplash. As with each highlighted actor of the evening, Simmons entered the stage to a short clip from his film. But what did the audience find in his virtuous moment? Simmons playing Terrence Fletcher, a raging music teacher who inspires his students into humiliation and tears. In such a dynamism, Rowling queried the audience, “Who was the hero or the villain?” To embody such a controversial and formidable professor proved a unique challenge, but only in times where honesty was lost. “The tough scenes were the badly written scenes,” Rowling remarked, “and we didn’t have any of those in the film.”

Heroes and villains. Murderess psychos and peace prodigies. Teenage children of abuse and juvenile soldiers who abuse. Infatuated, sleepless possession by a character and the ability to carry out a dream, even if it kills you. If these were the criterion to become a Virtuoso, why would anyone sign up?

“It’s a total fascination with being alive,” remarked Jenny Slate, recipient of the final award for playing an abortionist comic in Obvious Child. “It may not seem so, but there really is an art to this scatological revealing of yourself.”

One thing is for sure: it costs a lot to “break through.” To encounter the brilliant insanity within us, the full spectrum of humanity that allowed Maya Angelou to write, “I am capable of what every other human is capable of. This is one of the great lessons of war and life.” And, indeed, it is one of the great lessons of acting. And so, we honor these Virtuosos not only for their seminal artistry, but also for their personal bravery to inhabit the ghosts of their own skin – for their ability to show us how to be real. To teach us, as award presenter Christopher Lloyd crooned at the evening’s close, how to “live truthfully even under imaginary circumstances.” It is this balance of actual and imaginary, this mastery of, as Rosamund Pike spliced, the “knife edge of skilled and free” that makes a Virtuoso.

And so, we find our definition. From the swinging hips of James Brown and the thunderous speeches of Dr. Martin Luther King to the bombing stand-up comic to the actual bombs of the soldier in training. Breaking through breaks you open.

And we wouldn’t want it any other way.