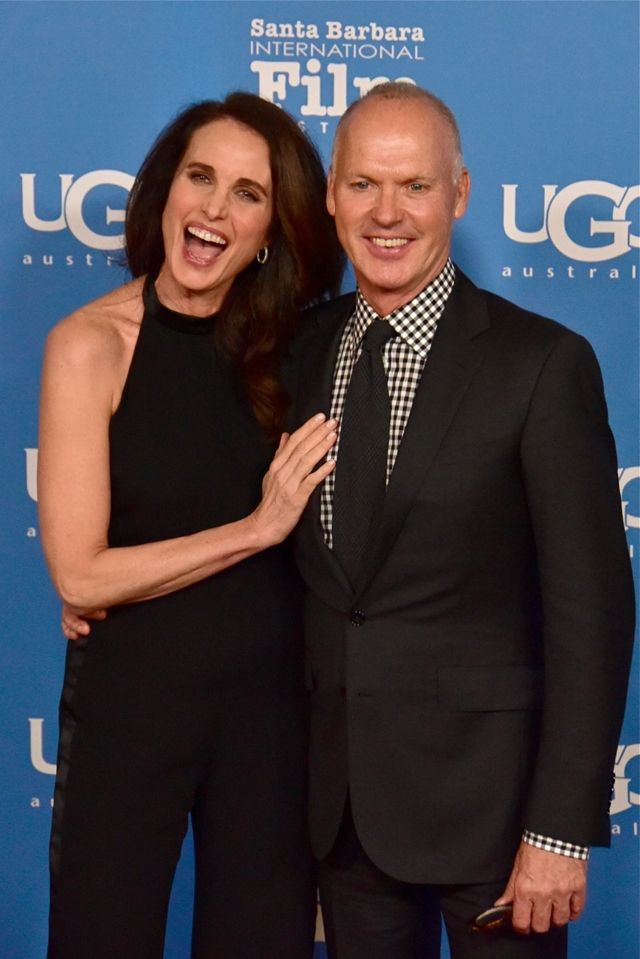 Written by Jenny Schlax on 31 January 2015 Posted in SBIFF Reviews.

Three simple words flashed on the screen before a clip from Birdman featuring tonight’s recipient of the SBIFF Modern Master Award: Risk. Above. All. These words accurately describe Michael Keaton’s acting career.

It is hard to determine which one of Michael Keaton’s movies is my favorite. The characters he has portrayed span across comedy, action, suspense, and drama genres so effortlessly. His eclectic career has seen the rise of Beetlejuice, Batman, and now Birdman. My favorite film of his may be Beetlejuice, however my favorite character is definitely Ray Nicolette in Jackie Brown. That said, Keaton is my favorite Batman of the entire Batman movie franchise. All this is debatable.

Saturday night, the Santa Barbara International Film Festival honored Keaton for his brave portrayal of Riggan Thomson, a has-been actor who once played an iconic superhero now desperate to regain his former glory in Birdman. His performance already received over 30 awards internationally and has been nominated for an Oscar for Best Actor – which would be the first for this seasoned actor.

“Call it a renaissance,” proclaimed the night’s moderator, Leonard Maltin, as the tribute began. “Birdman is a reaffirmation of Michael Keaton’s enormous talent.” Maltin made no bones about being a huge fan of Keaton’s, stating that he was hooked when Keaton first burst on screen in an extraordinary comedic performance in 1982’s Night Shift.

Addie MacDonald, Keaton’s co-star in 1992’s Multiplicity, introduced his video montage of film work, stating that Keaton was both an inspiration and friend. “At 63, he is brave enough to run through Times Square in his underwear… He has balls!”

Keaton’s film career flashed before our eyes. Night Shift, Mr. Mom, Beetlejuice, One Good Cop, Batman, Pacific Heights, Much Ado About Nothing, Jackie Brown… and on and on. Until finally, Keaton jumped up from his seat, paused to play air guitar in the aisle, and made his way to the stage facing a standing ovation.

“This is oddly intimidating.” Keaton stated immediately to Leonard Maltin. “This is overwhelming… You think you get it, then you see it all. It’s a lot to take in. I am truly blessed.”

Keaton’s birth name is Michael John Douglas. “It’s, actually Michael John Daniel Douglas,” he clarifies, “I had communion.” The youngest of seven kids born into an Irish family, Keaton enjoyed being silly and getting lost in books. He would run around the neighborhood naked, his brothers would scare him with stories about a boy named Johnny living in the attic, and his father would have shady characters over with thick Irish accents. There was too much to do and see. So essentially, Keaton got into acting as an outlet for his over-active imagination. “It had to come out somehow, and it came out as acting.”

Keaton first released his imagination on the comedy circuit doing improv at open mic nights in New York, which he called “performance based mini plays,” while working crappy day jobs. He used improv groups to feed his need to perform, eventually trying his hand at television. “I am not good on TV,” Keaton admits, “I don’t know why… I don’t know…”

Moving out to LA, Keaton, still Douglas at this time, was informed by the actor’s union that there was already a Mike and Michael Douglas, so he had to use another last name. “Ironically, Michael Douglas’ last name isn’t Douglas, it’s some Russian name I can’t recall,” Keaton complained jokingly. His family had called him Jackson as a nickname, so he thought about using Michael Jackson, but that too was a bust for obvious reasons. So he randomly picked Keaton. It had nothing to do with Buster or Diane. “But it’s nice. I don’t use Keaton for anything except my work,” explains Keaton. “It really keeps my personal life separate.”

As Maltin began the parade of movie clips, we really got to see Michael Keaton – the creative force, as he spoke about why and how each character evolved.  “It’s an odd job. You can’t put your finger on what you did that day,” proclaimed Keaton. “Unlike working outdoors, there’s no dirt to wash off.”

The characters were born from the union of visions of the writers, directors, and actor… and sometimes other crewmembers. Bill Blazejowski in Night Shift was born when Ron Howard saw Keaton dance into the audition room. Beetlejuice was harder. “Tim was not describing anything I could understand,” admits Keaton. So he met with make-up artist Ve Neil and they just went for it, the energy building upon that collaboration. Batman’s voice came from Keaton’s need to rationalize the scenario. He believed there was no way anyone would not know Batman was Bruce Wayne once Batman talked – it wasn’t rational. Without “the voice,” he was just Bruce Wayne in a tight bat suit. Dogberry in Much Ado About Nothing was based on a particular shady friend of Keaton’s father. And Birdman’s voice was the result of telling director Alejandro Gonzalez Inarritu the story about the Batman voice. These antidotes all lovingly told between clips from some of Keaton’s best work.

As we came to the end of the evening, Roger Durling emerged on stage, “sobbing watching the greatness of Michael Keaton.” This is the 30th anniversary of the Film Festival and the 25th anniversary the Modern Master Award. Ironically, Michael Douglas received the 1st. Durling exclaiming, “This was all meant for me to honor you tonight.”

Taking risks wasn’t the original game plan. Keaton originally just wanted to do good work.  With Birdman, Keaton knew it would be different. “Deep inside, I knew I knew it… It was more different than I thought it would be – you’re exposed, literally. I have a weird job. Alejandro said you are going to go deeper than you ever have – and I did. You are here for a millisecond, you have to make the most of it. You must have courage.”

Risk. Above. All. An example well set by Michael Keaton.