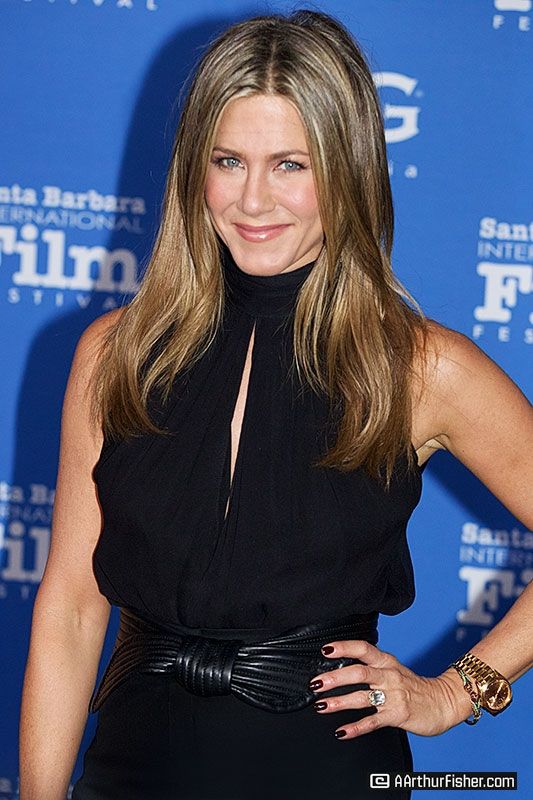 Written by Liz Gorman on 26 January 2015 Posted in SBIFF Reviews.

Stepping onto the pavement, her first destination was not to the waiting cameras but to the fans as she made her way around the line passing out autographs and smiles. She won their favor as they serenaded her with the official Friends theme song, ”I’ll be there for you.”

Having received 85 nominations and won 32 awards, the list is substantial and includes an Emmy, a Golden Globe Award and a Screen Actors Guild Award just to name a few. The Montecito Award is given to a recipient whose style has been a contribution to film and Aniston clearly sits in that category. Past recipients include: Geoffrey Rush, Oprah Winfrey, Daniel Day-Lewis, Julianne Moore, Kate Winslet, Javier Bardem, Bill Condon and Naomi Watts. The prestigious Montecito Award presented to Jennifer Aniston for her role in Cake came with full credit for the actor she has become in recent years. From prime time sit coms to low budget horror and offbeat comedy to indie dramas, she's been part of the American pop cultural consciousness since Bill Clinton was president. And that's a mighty long time in Hollywood to remain relevant and successful.

According to my daughter, Lana Shea, a SAG member who recently saw the film had this to say about Cake: “It was a real-life drama without being overly-tragic about it all. Jennifer Aniston plays Claire, a woman who’s sharp wit and rich sarcasm mask her deep and chronic pain. The relationship between Claire and her housekeeper Silvana, played by Adriana Barraza, is a revelation of a complex and close relationship between two women in very different socio-economic classes; their onscreen interaction is a joy to watch and also uncomfortable at times. All in all it’s a quirky, penetrating look into rebuilding life after catastrophe strikes, executed by an expert cast including a short but powerful cameo by William H. Macy.”

Clad in stunning black high neck sleeveless pant suit complemented by soft leather sash tied at the waist and black pointed pumps with red soles, the actress turned fashion icon turned award winning actress made her way from an aisle seat to the stage with all eyes upon her. The Hollywood star, sitting in front of a clear pink backdrop was as amazed as were we at the prolific nature of her career as evidenced by the vast array of film clips we watched together. She reflected on the great learning experience of being in Friends and how the sitcom gave her the training necessary to take on film roles in Leprechaun, The Good Girl, Office Space, Along Came Polly, Friends with Money, the Break Up and more. She directed and starred in The Switch, had the time of her life doing Horrible Bosses movie and its sequel, was challenged by Wanderlust and drew from past life experiences to get the character just right in A Life of Crime. Her ups and downs, both personal and professional yielded lasting friendships with the likes of other Hollywood luminaries such as Adam Sandler, Justin Bateman, Paul Rudd, Owen Wilson and of course, Justin Theroux.

Jennifer waxed sentimentally about coming to Santa Barbara since she was a baby, “Right here on this beach, playing in the sand, building sand castles and making dreams!” She grew up in New York City, attending a Waldorf school and not having any television but getting to go see plays. Once she saw Annie live on stage, she knew she was hooked. After graduating from The School of Music and Performing Arts in NYC, she had the courage to take a chance on her dreams one summer while visiting her father in California. Her father; John Aniston who, 34 years later is still on the soap opera, Days Of Our Lives discouraged her from entering into the industry. She was so glad he tried to dissuade her from pursuing her career because it only fostered a stronger belief she was meant to find her way on her own. And that she did, clearly as we all got to see bits and pieces of her work over the past 20 plus years. Hats off to Dana Morrow who compiled a wonderful selection of clips that played on the screen behind her. At the conclusion, she had all but forgotten some of the parts she’d played and was overwhelmed by the fantastic treasure of seeing them all together.

Suggesting life is just a series of what her industry calls “dramedies”, Jennifer said she wouldn’t have missed this honor for the world. She promised to dig deeper and bring more to the screen in future opportunities. Her humility and gratitude were touching and made us all smile at the success of Ms. Aniston, a truly deserving recipient of the 2015 SBIFF’s Montecito Award.