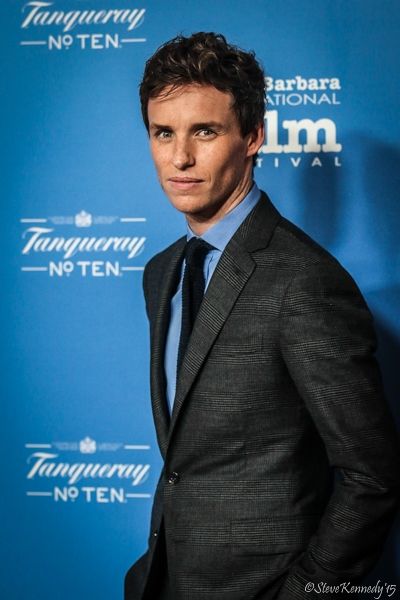 Written by Jennifer Strube on 25 January 2015 Posted in SBIFF Reviews.

When Redmayne and Jones Accept the Cinema Vanguard Awards, It’s a Brave "Theory of Everything"

When Nicole Kidman tells you she gets frightened, you listen. When the fearless and iconic Australian actress tells you courage is difficult, your ears perk. “It’s hard to stay brave when you get older,” Miss Kidman said in her 2011 acceptance of the Cinema Vanguard Awards. “You are suddenly aware of the risks.”

Flash forward to 2015. Not one but two young actors now grace the lit stage of the Arlington as Kidman’s words flash in their shadows. The acting couple, with dual Oscar nominations for Best Actor and Actress, sit side by side watching the clip of the prior award winner. The red-haired man relaxes in a dapper grey plaid suit and the chestnut-haired woman graces the chair in a stunning black A-line gown. Seated next to Hollywood reporter Scott Feinberg, all three unwind with legs gently crossed and palms open, looking as zen as a starry night.

“I find it all genuinely frightening,” Redmayne remarks, breaking the silence when asked about his career leap from film into theatre. “Petrifying” is the word of choice for Miss Felicity Jones. “You forget there is an editing process.” Yet acting is not novel to either of these masters, each having launched their debuts before they hit puberty. “My first job I was dressed as the letter ‘v’ in a promotional video,” Jones jokes, while Redmayne ups her with his Boy #347 role in a play he later removed from his CV. Together, more laughs reveal a long and congenial history between two actors who met years prior at a cancer benefit in England. Little did they know that terminal illness would fuse them back together again, this time to tackle everything from aging to astrophysics. Sounds like a pairing sent straight from the cosmos, doesn’t it?

“The euphoria lasted under one second,” Redmayne jokes, “but the sucker punch of terror lasted nine months.” These were the jitters the Best Actor nominee felt when the actual Stephen and Jane arrived on set in the initial week of filming. Despite the compliments both received on their accurate performances, Redmayne remarks it was the “freedom to fail” rather than the hope of perfection that gave him the courage to tackle Hawking’s character and disease.

While the Ice Bucket Challenge made ALS a household term last summer, the Theory of Everything sent sincere chills up audience’s spines. And in order to translate the disease’s centrifugal force, Redmayne and Jones spent months visiting an ALS clinic prior to filming. There, they charted and memorized the sequence of upper and lower neuron and muscle loss, all the while noting the tender dance between patients and caregivers. However while ALS degenerates the body in a liner progression of muscular rigidity and softness, movies are more circular. In fact, films are shot in the same way love stories are lived – in a murky spiral where two people meet, break up, spoon-feed each other, and then become friends. In other words, it’s a messy order of operations. Redmayne and Jones, never having acted together, auditioned for their roles with the scene that ended their romantic relationship. “I had to be able to jump in and out of all the various stages of the physicality of the disease,” Redmayne explains, as any given day’s shoot could portray Hawkings in a variety of ages and physical health.

Yet the disease does not steal center stage. The couple does. And as the couple’s connection degenerates with Hawking’s physicality, new theories emerge – theories not on science, but love. The Cinema Vanguard Awards highlight this development well, using the film’s opening clip as a teaser to the evening. Here, bright-eyed Redmayne and his studious colleague stumble down an academic foyer, discussing dissertation topics. “What would a doctorate on the physics of love look like?” they ask each other, creating all kinds of hypothetical eyes with every girl in their frequency range. And this is the very question Redmayne and Jones ask us with their symbiotic performance. What would the physics of love look like? Quantum communication? Astronomic honesty? A string theory of sacrifice with a galaxy of commitment and black holes big enough to forgive all wrongs?

Or would a doctorate on love’s physics resemble an “incredibly complicated and passionate story between two formidable people” – words Redmayne uses when elucidating why he originally fell for the script.

But maybe that’s what bravery is: the facing of complication with formidable determination and passion. Perhaps in order to be brave, you must first be terrified, the two states not mutually exclusive but entirely dependent. Bravery needs fear as Redmayne needs Jones: two entities fusing as one body. Or, in the words of screenwriter Anthony McCarten, the two are “best duet… two facile materials chemically designed to react with each other.”

Just how do these two separate elements of Redmayne and Jones combine to create such a balanced equation? With the freedom to “always do something to provoke the other person,” Redmayne chuckles. This symbiotic provocation and alchemical challenge builds honesty and trust, taking two actors who are individually stunning and combining them into a compound chemical delight most worthy of celebration.