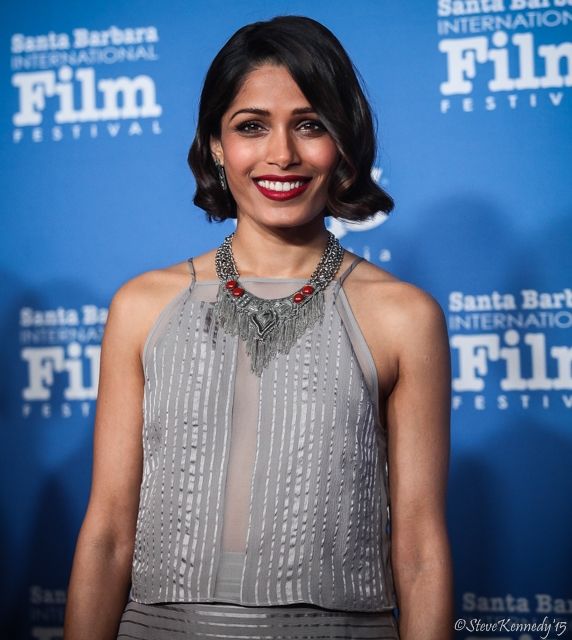 Written by Jennifer Strube on 24 January 2015 Posted in SBIFF Reviews.

SBIFF Opening Night: Dance As If Everyone Is Watching...

These are not the typical words that first come to mind when we imagine the opening night of the Santa Barbara International Film Festival.

We viewers have no problem visualizing the lights, glamour, and couture of a festival celebrating its 30th fabulous year. We anticipate fame and fortune to walk past us, actors of genius and directors of note. We are slightly blindsided, however, when the twilight beckons us deeper, and when we are asked on a balmy winter evening to enter into poetry.

Poetry: not our typical conversation topic on the red carpet.

Poetry: a disturbance of the typical celebrity regime – and one that encircles us like a whirling Rumi verse.

Desert Dancer, a film which chronicles the true life story of Afshin Ghaffarian, held its North American debut on Tuesday evening at the SBIFF. As the audience settled into the lavish seats of the historic Arlington Theatre, we all expected to see a courageous film about two Iranian lovers finding their rhythm in the midst of a hostile 2009 election season. We expected the Patrick Swayze cameo in the opening few minutes, as a dusty copy of Dirty Dancing appeared in a deserted box. These were givens. What startled us, however, were the film’s opening frames before the mothballed Swayze – text reminding us of Iran as the birthplace of poetry. Facts that recalled Iran as the world pioneer in human rights charters. Scenes that brought to life an endearing Iranian man who danced his way past torture and into freedom.

This narration breaks our Western perceptions. Aren’t we afraid of Middle Eastern males? Isn’t Iran a country that we discuss for human rights violations, not human rights charters? Didn’t England give the world poetics?

Yet this is what Desert Dancer does so poignantly. It illuminates our fears only to illustrate how art bravely shatters these walls.

“Be bold. Be brave. Be free.” These were opening remarks to us by Roger Durling, a self-described “Woody Allen Panamanian immigrant neurotic” who took the stage with poise and a written list of his own good fortunes – among them the honor to be a part of a festival which represented 54 different countries, where “diverse forms of self-expression are free to congregate and to be a community of film lovers.” He then, in a very pastoral manner, asked the audience to join the festival’s opening tradition by turning to a stranger, “extending your hand, taking a minute, and sharing yourself.”

Self expression. Gratitude. Tradition. The passing of the peace. Were we in a church?

And that, dear friends, was the brilliant paradox of opening night. Desert Dancer debuted on American soil, teaching us through its script that, “Our country is like two parallel worlds… where outside there are rules, but in here, we are free.” Throughout the film, more ironies emerged combining hypnotic dance scenes and violent election protests, cries of artistic passion fused with shouts of political fury. This juxtaposition carried throughout the script, with syntax splicing between the Iranian’s teeth, claiming that, in Iran, dance was “not technically illegal, just forbidden.” Everything about this piece shouted for integration, including the host countries of choice, having previously premiered in both Germany and Hong Kong (2014) – two locales that have their own history of paradoxical political regimes.

And now, Desert Dancer has graced American shores. But are we ready, America, for poetry on a Tuesday night? Can an American audience connect with a film about freedom of self-expression? This is the very question I asked lead actor Reece Ritchie on the red carpet. Reece, like myself, wasn’t sure how the film would be received by America, as the topic of banned art seems removed from our everyday reality.

With Sony’s recent controversy over the distribution of The Interview and the horrific Paris attack on Charlie Hebdo, Desert Dancer enters the American world in a timely manner. Perhaps now more than ever, American audiences are ready to delve into topics that once seemed so far removed from us – topics of free speech and cultural expression. As such, Reece plucks an innate chord within, expressing that Desert Dancer aims to be a “human story – and anyone who is human should be able to connect with it and emote.”

At the end of the evening, the audience was privileged to connect with the very human this film brought to life. As the cast of Reece Ritchie (Prince of Persia: Sands of Time), Freida Pinto (Slumdog Millionaire) and Tom Cullen (Downton Abbey) took the stage, director Richard Raymond introduced us to the actual Afshin Ghaffarian via a personal letter. To Raymond and the viewers, Ghaffarian wrote, “I believe in this. I congratulate you… This tenacity is what we share together – that same tenacity that took me to the desert.”

Tenacity. Self-expression. Tradition. Gratitude. At the end of the day and at the end of this dance, we are left longing for this. We are left with ourselves, the opening and closing lines of the film the same few words repeating softly in our eardrums and circling in our minds, “My name is Afshin Ghaffarian. I am a dancer.” With fervent resolve, we are left to ask what are own names are, who we are when all is misplaced, and what impact our footsteps will have on this soil. You are right, Reece: we all are human struggling to show ourselves and find our true homes. So we promise, as the great German choreographer Pina Bausch once boldly taught, to “dance, dance… otherwise, we are lost.”

Thank you for showing us how.