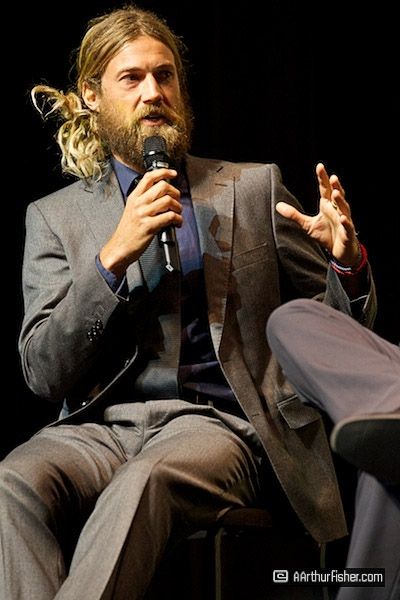 Written by Chris Johnson on 04 February 2014 Posted in SBIFF Reviews.

When director Jason Baffa (Singlefin: yellow, One California Day) charted the production of his next surf film, he carefully weighed factors like logistics, format, budget and duration… and chose Italy.

The Santa Barbara International Film Festival has screened a surfeit of surf films over the years, featuring bombing barrels, extreme action and remote locations. Eschewing the Red Bull/GoPro mentality, Baffa decided to do something different.  Partnering with surfer, artist and environmentalist, Chris Del Moro (whom he met at the SBIFF in 2008) the filmmaker, “did a scary dance between core and culture.” Sharing a passion for surfing as well as an Italian bloodline, they traversed the Tuscan coast for three months in search of surf and family lineage, along the way, documenting Del Moro’s pilgrimage, local color, food, the confluence of old and new-world craftsmanship and a burgeoning Italian surf culture. The result is Bella Vita, a soulful and spirited transcendent travelogue into the personal, artisanal and communal side of surfing.

This communal spirit was evident on the red carpet for the fifth night of the festival, as cast and crew congregated as one mass famiglia at the Arlington, posing for pictures and exchanging greetings in Italian and English. On hand were director Baffa, Del Moro, Italian surfers Alessandro Ponzanelli, Nico Pinzauti and Luca Forte, acclaimed filmmaker Dana Brown and producers Anh-Thu Le and Greg Schultz, to name a few (local boys Conner and Parker Coffin were busy competing at Pipeline).

Opening on an iconic note, the film dissolves from a shot of an aged Italian cathedral arch to a soul-arch sporting Del Moro, nose-riding across an emerald face.  Requisite travelogue shots of the Tuscan countryside - sun bleached stone villas, rustic winding roads and vineyards - are rendered with sumptuous 35 mm grain and saturation by DP Scott Kassenoff, establishing a subtle motif that pervades the film; the ancient acumen needed to harvest grapes at the optimal time, mirrors that required to properly gauge conditions in the quest for capricious Italian surf.

Del Moro arrives during late summer/early fall just as he did throughout his teen years, shuttling between divorced parents in California and Tuscany. This is also the ideal time to catch swells generated by African winds from the south and weather systems from the north. “Forget everything you know about surf forecasting,” warns Aussie surfer, Dave Rastovich, one of the many friends that drop in on Del Moro during the trip. Despite over 4,500 miles of coastline, the Italian peninsula is notorious for micro-climates, weather and swells that appear and vanish within minutes, challenging the surfers on hand to charge and milk every session.

The surf sequences, also mostly shot in 35mm, while not spectacular, showcase some solid (and virtually empty) swells and the pros make it look easy. Baffa chooses extended takes over the quick cut and it serves the material well, giving a smooth, expression-session feel to each ride and an almost summer camp vibe of pure fun to the film (in fact, the Coffin brothers christen their stay “Fat Boy Summer Camp” as they unabashedly gorge on pasta and other regional delicacies between sets).

It’s also during this down-time when the other gems in the film are uncovered, from Del Moro’s re-connection with childhood family and friends (akin to the Hawaiian tradition of extended family Ohana) to the incredible food and wine, “when the waves aren’t pumping the dinner table is.” An eclectic mix of legendary Italian watermen and characters are profiled like the (in)famous Fracas brothers who, oblivious to the exploding global surf craze of the 1960’s fabricated their own surf-riding vehicles (including cabana doors). Skilled artisans ply their centuries -old skills to modern surf design, while the country’s nascent surf culture evolves, potentially producing future pros like Leonardo Fioravanti, and, as one Italian surfer exclaims, “without the stupid stuff of surfing,” (which garnered hefty applause from the audience).

After the film, audience members participated in a lively Q& A with Baffa and Del Moro, moderated by the festival’s To the Maxx producer Russ Spencer, where Bella Vita’s many challenges were revealed, as well as an unorthodox way to secure music rights involving a train, copious amounts of alcohol, members of Mumford & Sons and a cocktail napkin.