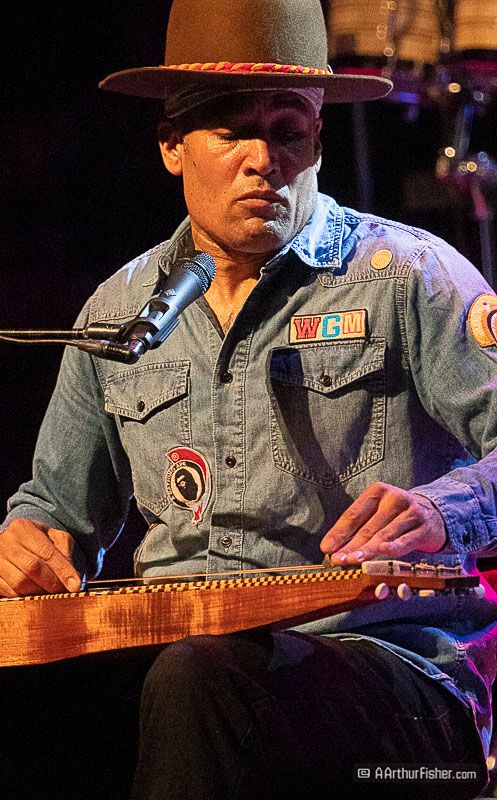 Written by A. Arthur Fisher on 17 September 2019 Posted in Event Reviews.

Pomona-born Harper actually kicked off his career in Australia. He is an international musician, well-known the world over. That said, Ben is an honorary SB local. He even buys his guitars here at Jensen Guitar & Music Co. Mr. Harper was quick to point out that he has attended more concerts here in Santa Barbara (SB Bowl and Arlington) than everywhere else combined. His words were heartfelt and a little political during last night's performance. “We need to do all that it takes to preserve the present, the past, and the future.” Then Ben Harper and The Innocent Criminals slipped into Diamonds On The Inside, Ben closing the song by belting out a full, naked verse. Without an instrument or microphone, at the stage's edge, he leaned into the audience and sang. Clean. Un-mic'd. With only a gentle bass fill and a very slight cymbal tap. It was chilling. If you've never seen Ben do this before, it's a real treat.

But she had diamonds on the inside…

Ben Harper has shared his craft with numerous acts, originally discovered by Taj Mahal. Harper later discovered Jack Johnson here at the SB Bowl. Currently, Ben is producing and performing on Hey, King!'s pending album. King opened this show. Rebecca Schlappich is their new violinist, and she is the wife of Oliver Charles, drummer of The Innocent Criminals. King's seven-piece ensemble even includes a trumpet to fill out their indie-dynamic and dramatic sound, led by all-female vocals from partners Natalie London and Taylor Plecity.

It was a late-summer night here in Santa Barbara, but the humidity was high. The theatre was well-airconditioned, necessary because the crowd was on their feet dancing all night. Harper played electric and acoustic guitars but mostly stuck with his lap steel and console steel guitars. The band opened with some crowd favorites, including Steal My Kisses and Burn One Down.

Ben has this incredible way of producing a unique heavy metal character on a lap steel guitar. It's all his own. As a jam works up, the slide transitions from fill to dominant lead. Once he gets going, it looks like nothing less than a child throwing a tantrum, but what you hear is perfectly constructed ritualistic energy. It's no country twang. When you experience it, you know he's a master. Contrast that with Ben soloing Walk Away on acoustic guitar, cleverly fading the song out by slowly walking away from the light and mic. To say he brings pure emotion to his music is an understatement.

On his Fender 5 String bass, Juan Nelson thwaps out a funky jam that sounds like the Seinfeld foley on mushrooms. Juan bangs the frets from the neck's top to bottom. Although you might not think he can do lead vocals, he sounds interestingly pleasant if not a bit hollow like Steve Winwood. The two guitarists entertained us with fierce "Duelling Banjo" style exchanges. Rounding out The Innocent Criminals line-up was Leon Oakley on percussion and Oliver Charles on drums, both keeping the beat alive. Ben stood to play his console steel for a powerful (I Believe in a) Better Way.

I think this was my 9th time seeing Ben, and it was also the most intimate. Thank you, guys. Come back anytime.