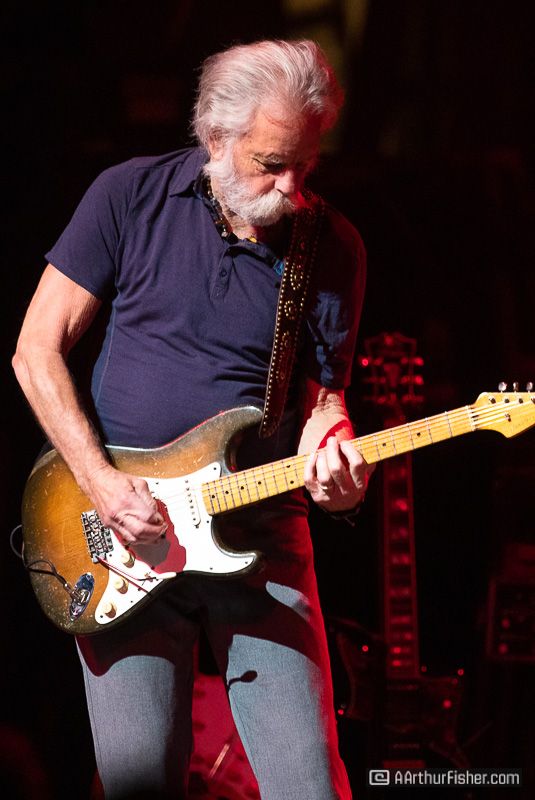 The Tribe Shines On Bob Weir & The Wolf Bros

Bob Weir & The Wolf Bros delivered a fresh take on a nostalgic era to a packed and pleased house at the Arlington Theater on Saturday night.

Yes, it has been 50 years since Weir and Jerry Garcia first plugged in to give life to what would become the iconic sound of the Grateful Dead. Yes, it’s been 23 years since Jerry passed on, marking what many expected would end the long strange trip. Yet, judging by the energy and wide age range of Saturday’s audience, the tribe remains loyal. And it continues to grow. Twenty-somethings and gray hairs, together in their tie dye, danced and sang along from the opening notes of “Hell In a Bucket” to the pre-encore “Not Fade Away.” Somehow the torch continues to be passed. And there’s something reassuring about that.

The distinctive guitar sound that for many of us is synonymous with the Dead was woven throughout the two sets. However, Weir continues to experiment and push the music to new places with fresh takes on classic songs and extended jams. As a legend of rock and a prophet of hippiedom, one might expect Weir to take it easy and simply deliver the classic tunes the way the faithful first learned to love them. Instead, he introduces new rhythm and tonal qualities that take familiar songs into new realms, sometimes masking their true identity until the telltale first lyrical line ("Dark Star”).

Interspersed with the Dead classics, Weir wove interesting selections from other masters including Merle Haggard (“Mama Tried”), Bob Dylan (“When I Paint My Masterpiece”; “All Along The Watchtower”), and Donovan (“Sunshine Superman”). The crowd enthusiastically sang along.

This time around, Weir’s A-Team trio consists of bassist Don Was (Was, Not Was; currently President of Blue Note Records) and drummer Jay Lane (Further, RatDog). The new streamlined yet sonically deep lineup masterfully delivered, as if they had played together for years. And as a special surprise, the band was joined on “All Along The Watchtower” by young bass phenom Tal Wilkenfeld, a rising star with an impressive resume and massive stage presence (look up her duel bass solo with Jeff Beck). I wish Bob had made more of a point of identifying Tal when she took the stage, as many weren’t aware of who they were having the privilege to see and hear.

From one perspective, Weir & The Wolf Bros’ Saturday night show was one of a kind, showcasing a legendary artist in a new format that is as interesting and entertaining as anything he has delivered. But Weir’s performance also represents a continuum of sorts. A chain of hundreds of Saturday nights, with Weir presiding, filled with dancing legions, singing along and celebrating life. A chance for the tribe to regroup, to remember, to relive and pass along a distinctive rock music experience. Well done, Bob. Here’s to one more Saturday night.