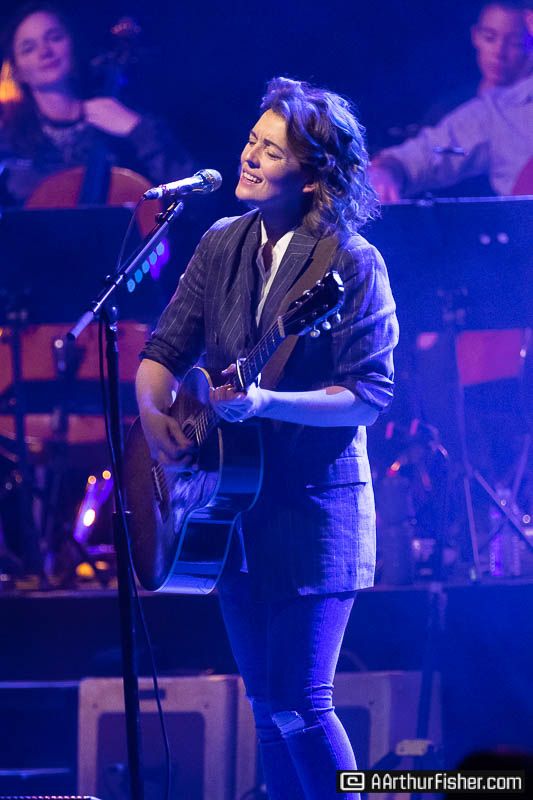 Written by Hillary Gordon on 20 August 2018 Posted in Event Reviews.

It’s all in the Story

Seeing Brandi Carlile play live is an emotional experience. One would be hard-pressed to find a single person in attendance at The Arlington Theatre Saturday night who wasn’t moved at some point during her nearly two-hour show.

Carlile, on tour in support of her sixth album, By The Way I Forgive You, was joined by her longtime bandmates, “the twins” Tim and Phil Hanseroth, along with a full band that included a string section. She opened with the first song off her new album, “Every Time I Hear That Song,” a poignant, folky tune about memories of a past love. From there she went into “Raise Hell,” a foot-stomping rocker off her 2012 Bear Creek album. The rest of the evening included plenty of new songs off I Forgive You peppered with older tracks, including her arguably most well-known song, “The Story” which prompted a sing along and lots of hands in the air from the crowd.

There are a lot of things that go into making a Brandi Carlile show the emotional experience that it is. One of those things is the way Carlile and The Hanseroths transition with ease from quiet, heartbreaking songs into foot-stomping, rollicking, “head bangers” as Carlile put it. One of the most memorable and moving moments of the night was when the backing band walked off stage, and with only an acoustic guitar, Carlile and the twins harmonized quietly the brilliant song “The Hurricane.” Beforehand Carlile thanked the crowd for allowing them to perform one “in our native tongue.” Another ingredient in the fervor that is a Carlile show, and maybe the most obvious one of all, is her voice. Even if Carlile’s lyrics weren’t beautifully crafted stories and poems of love and loss, motherhood, addiction, feelings of being an outsider, of activism, of growing older, missing your parents, and fighting with your partner - even if her lyrics didn’t stand alone in their beauty - her voice is enough to affect even the most stoic of concert-goers. Part country twang, part gospel, part crackling fire, Carlile hits every note with power and with precision as she filled the Arlington Theatre with anger, sorrow, hope and passion. And when her voice let out its signature crack, it felt like the walls of the Arlington Theatre might crumble to the ground.

And if that wasn’t enough to move your average concert-goer, Carlile is an open-book when it comes to the meanings of her songs and her personal life. She was candid about her feelings on what it is to be a lesbian activist in today’s world, on addiction and on her evolving feelings of motherhood. She explained that since becoming a mother she can’t be judgmental anymore, “which sucks,” she said with a laugh. Then went on to say that she can no longer think of a junkie as “just a junkie, but somebody’s baby who fell on some real hard times,” then went on to sing “Sugartooth,” a song which tells the story of a high school friend struggling with addiction.

Before breaking into “Fulton County Jane Doe,” Carlile explained how Tim Hanseroth had read an article about a woman found dead in a Georgia field who was never claimed. “She was 30,” Carlile told the crowd. “She’d given birth to somebody at some point and had a tattoo of Jesus on her hand.” She went on to say the story didn’t sit well with her and if Jane Doe died without a name, she wasn’t dying without a song. She went into honest detail about her feelings surrounding the birth of her first daughter Evangeline (she just became a mother for the second time five months ago) and how she wished more people would be honest about things like postpartum depression so there’s less shame in the world. While Carlile spoke of some heavy things, there was also a lot of joking, laughing and fun being had among Carlile and her bandmates. She asked the crowd what she and her family should do with the next few free days they had in Santa Barbara. She told a story of the twins almost being run over by David Crosby the first time they played in Santa Barbara, opening for Shawn Colvin at the Lobero Theatre in 2003, and of how thrilled they were to have been almost hit by one of their idols.

The night included a worthy tribute to Aretha Franklin with help from the opening band, Darlingside, as they did an honorable version of “Do Right Woman.” It also included Carlile and The Hanseroth’s harmonizing with a ukulele from the side- balcony of The Arlington, and a seemingly surprise encore of “That Wasn’t Me.” The show was quiet, loud, hopeful and strong. Carlile’s earth-shattering voice was the most powerful instrument of the night, both in song and story.