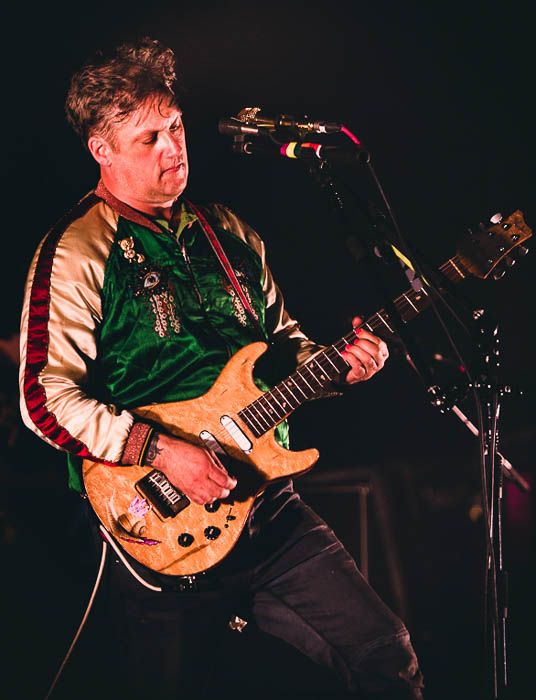 Written by Jenny Schlax on 23 May 2018 Posted in Event Reviews.

Some experiences are hard to describe with words. Sometimes you really do need to be there. Hopefully you were when Modest Mouse arrived at the Arlington Theatre for a truly otherworldly performance.

Modest Mouse is known for their weird take on indie rock. As far as indie bands go, they are pretty far out there. This becomes very apparent in their live performance. With only six studio albums under their belt, their hit list is quite extensive. And they just about played every one of them at this sold-out show.

Truly mesmerizing, Modest Mouse teased the crowd before the haunting opening cords to “3rd Planet” echoed through the theatre, bring the excited crowd to an excited hush. With the use of strategically colored and placed lights, lasers made dramatic effects in an already dramatic song. The song set the tone for the rest of the evening. With a diverse set list full of ethereal songs strongly highlighted with colorful beams of light, Modest Mouse led the crowd on a strange and exciting adventure.

No one sat, no one blinked, and no understood singer Isaac Brock when he spoke to the crowd between songs, which added to the strange allure of the evening. All got swept aboard as the band sailed from one hit to another. “Ocean Breathes Salty, “Dark Center of the Universe,” “Fire It Up,” to more obscure songs like hard rocking “Doin’ the Cockroach” and the jammy “Talking Shit About a Pretty Sunset.” The set was long, full of darkness and light. The band jammed through sixteen songs before taking a break for an encore, which was quite possibly the longest encore I’ve ever heard, performing three of their biggest hits including “Missed the Boat” of course.

Playing tribute to one of their inspirations, Modest Mouse closed with a cover of the Pixies’ “Where is My Mind” as their second encore, Brock proclaiming “I’d stay longer, but we have a curfew.” At least that’s what I think he said. Anyway you heard it, if you weren’t there to experience the journey in person, you definitely missed the boat.