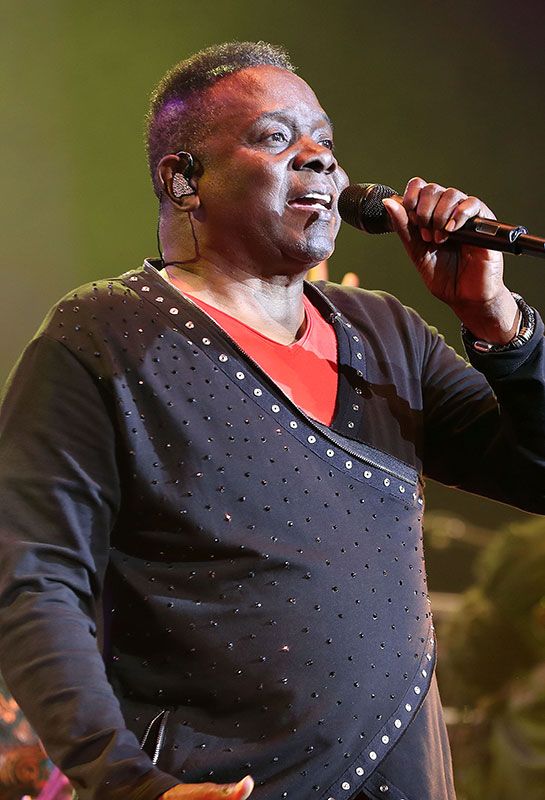 Written by Jenny Schlax on 13 May 2018 Posted in Event Reviews.

People were ready. Excitement built as the crowd poured into the Arlington Theatre to boogie to the music of legendary Earth, Wind & Fire on an otherwise regular Tuesday night.

But this was no regular Tuesday; tonight, Santa Barbara got to boogie down to some groovy disco tunes. The lights dimmed as a school of goldfish flew onto the stage backdrop, an illusion of laser visual effects; oh, how the times have changed. The fish quickly moved into the formation of a golden phoenix before flying off. Then all lights went off. Da-dunt! Horns. Light appeared as the EW&F golden phoenix started to rise on the screen, and with it the crowd’s excitement. The phoenix flew up, then all went dark again. Da-Dunt! More horns. Then from above, a hand descended followed by a bright red beam of light like the hand of God, until it touched upon the shadows of the three original band members as they appeared on stage. Da-Dunt! That’s how you do it.

Wasting no boogie time, Earth, Wind & Fire got straight to the funk with “Sing a Song,” complete with choreographed kicks and slides. Santa Barbara was on their feet with gratitude and a bit of boogie. The band was celebrating 45 years together, and tonight, original member Philip Bailey was celebrating a birthday – although they were coy about telling his age. The stage was configured with a high rise and drum set on the left (my left), a high rise with keyboards on the right, more percussion set below both, horns between the two high rises, and the original members front and center. It was hard to count with all the movement, but the final count was twelve band members on stage. The band was ready.

OG members Philip Bailey (vocals), Verdine White (guitar & fashionista), and Ralph Johnson (percussions) lead the way as they played through their impressive collection of songs. “Not all were top 10 in the charts; but they were top 10 in our hearts,” proclaimed Bailey as they moved into the slow love ballad, “After the Love Has Gone.” Bailey made a shout out to the ladies and they started popping up like daisies as he started to finger, or rather thumb, the kalimba (a weird hand-held finger instrument) taking the energy down a notch.

Earth, Wind & Fire continued to rotate the energy as they played to the crowd, their energy contagious and the visuals taking the crowd to a beyond earthly place. “We play music to make you feel good,” Bailey crooned, “Is it making you feel good?” With songs like “Devotion,” “Mr. Jones,” “Groove Tonight,” “Hearts of Fire,” and finally “September” hitting you along with the stage energy and visuals, it was hard not to feel good – or down right groovy.

After 45 years, Bailey was still hitting his legendary falsetto notes and making the crowd feel good. All the band members were making the crowd feel good. It became a giant love fest in the theatre and the crowd couldn’t take it anymore rushing the stage to dance below the band. You don’t see that often at the Arlington. The night ended with a birthday song for Bailey, to which he exclaimed “I’m too happy to keep the party going.” And the crowd was ready to boogie on.