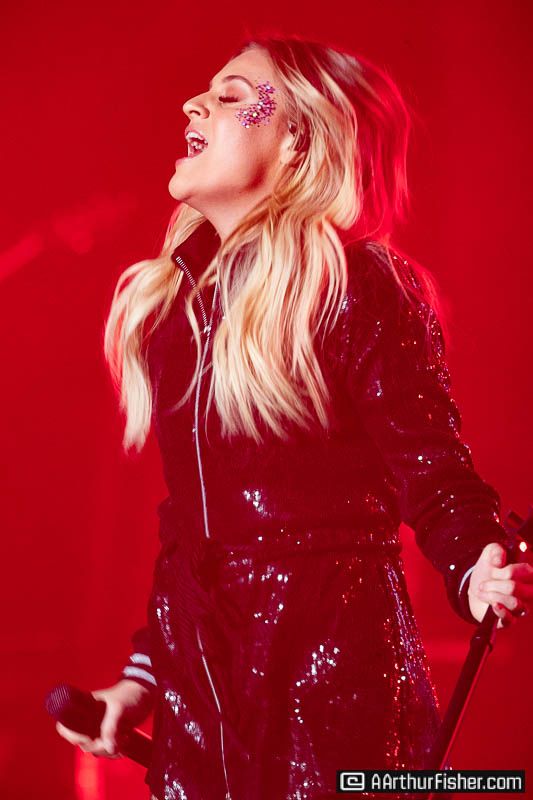 Written by Dani Tupper on 01 May 2018 Posted in Event Reviews.

Country Pop Princess Shines in A Sold Out Venue

It could not have been a more beautiful evening in Santa Barbara where American country pop singer and songwriter, Kelsea Ballerini, hit the last stop on her “Unapologetically” tour at the Arlington Theatre.

When I think of country music I visualize an open field, massive stage, and some of the most amazing patriotic Americans standing in dirt covered cowboy boots. That’s most likely because I’ve been that country concert goer many times standing in an outdoor venue, drink in hand, with the hot sun blazing down on me. Walking into the Arlington Theatre to see Kelsea Ballerini, was the perfect switch from old country to the new generation of pop country that is currently receiving so much attention. Looking around, I realized how many young women were singing and dancing and most weren’t even in high school yet. I’m not sure they were able to make the life connection to her heartfelt lyrics, but they absolutely knew them word for word. It was then I realized how much all these young women in the crowd idolized the 24 year old singer. Her songs are written about high school, heartbreak, marriage, and self-discovery. The set list seemed to chronicle the past 6 years of the songwriters life. She is easy to admire and her songs even easier to relate to. The comparison to Taylor Swift, in both her writing and on stage presence, is absolutely noticeable and I can see her accomplishing just as much as Taylor has in her young career.

Ballerini sure does have the trendy pop style that reminds me of what I can only describe as a stunning country pop princess. She wore a short dress covered in sequins, sheer crystallized nylons, and chunky heels. She was shining from head to toe. She glittered the crowd with not only her shimmery costumes but her flirty song lyrics and radiant smile. The stage was perfectly lit and she worked it very well while connecting with the audience. Her stage presence is admirable. The LED heart backdrop accented the impressive and very dramatic light show and the all-male band really complimented her, especially their backup vocals.

I was taken aback by her adorable charm and amazing voice. She is every bit as talented as you would imagine even if you’ve only ever heard her top hits on the radio. Her voice is crisp and clear sounding like every note was effortless to hit. Among what seemed to be crowd favorites were “Yeah Boy”, “High School”, and “Legends”; her albums top single. I believe she played every single track from her Unapologetically album and I was surprised to learn she wrote every song; showcasing her skills as a songwriter in Nashville from the beginning of her music career.

The night can be summed up in one word: Magical. The sold out crowd was full of positive energy taking me back to high school and reminding me what falling in love feels like. You can’t help but sing, dance, and admire the young artist. I thought I was a big fan before attending this concert however, I left wanting to follow her career to see what amazing accomplishments she will boast in the future. I didn’t care that I wasn’t in a dirt venue and that I left with clean cowboy boots. I left with a newfound appreciation for Country Pop and I hummed “Peter Pan” all the way to my truck under a beautiful star covered Santa Barbara night sky.