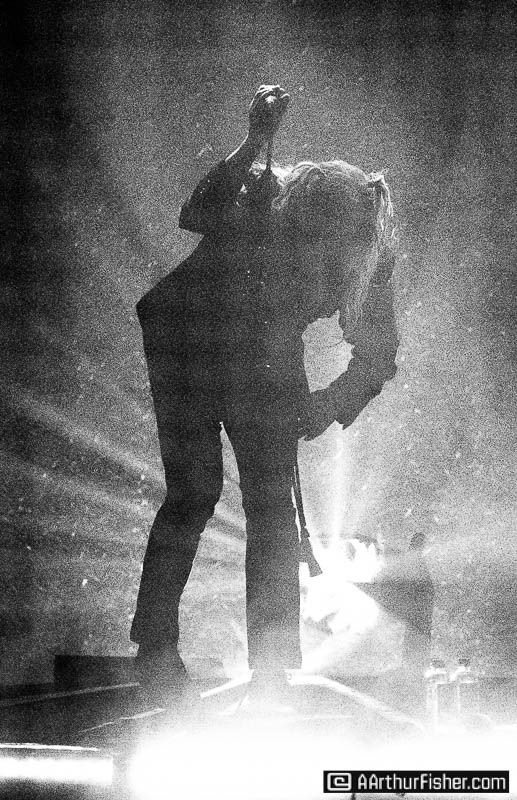 Written by Haaris Ahmed on 18 April 2018 Posted in Event Reviews.

In life some things we don't speak about, like politics with family or how West Coast pizza is terrible. Then there are instances in which people can’t shut up about what happened and if you were at The Arlington Theatre on April 17th then you already have buzzed about A Perfect Circle.

Taking the stage a bit after 8pm on an especially chilly Tuesday evening, the sold-out crowd packed into this "in between weekends for Coachella" show. You could feel the anticipation from the masses. The band has a new record coming out on 4/20, so no one had any idea what they were going to play. As this wasn't enough, it was also front man Maynard James Keenan’s birthday. As soon as the 1st chords echoed through the theater walls, a collective roar broke out and everyone, including myself, were strapped for this ride.

The production covered every inch of the Arlington Stage. Three circular platforms of varying heights (smallest to largest from left to right) had individual band members doing their thing with Maynard in the middle. Both guitarists kept wandering anywhere they desired and screens projecting all sorts of video madness covered the rest of this packed stage. Despite the massive amounts of lights and production, the entire show was filled with both light and darkness; and at no time throughout the almost 2-hour set was Maynard in the light. Instead, the crowd just saw his silhouette as his voice took center stage.

Having seen A Perfect Circle, Puscifer, and Tool, I can tell you that Maynard is not much for talking to the crowd in-between songs; but this Arlington show was an exception. Maybe it was the cold, or maybe it was the fact that it was Maynard's birthday, but all I can say is this guy was a Chatty Cathy. He acknowledged his birthday saying, "This is going to be a great show because I'm not trashed just yet." Later in the set, he stopped to point out that longtime band member and guitarist extraordinaire James Iha was not touring with APC because he was busy with the Smashing Pumpkins’ reunion tour, then proceeded to give the Smashing Pumpkins a shout out. Standing in was Greg Edwards of Failure/Autolux, and if anyone can fill James' shoes it's this guy. Maynard then informed the crowd that APC was going to play a lot of new sh!t, lamented about how crowds hate it when bands play a bunch of songs they don't know, and then proceeded to play 3 new songs back to back. In fact, a nice chunk (about 1/2) of the show was new music; some they have just released earlier this year and some that haven't seen the light of day. Their new music has the same feel and flexibility as their previous work so the set list just flowed from one song to the next.

Fan favorites like "Weak and Powerless" flowed right into "So Long, and Thanks for All the Fish," a new song off Eat the Elephant (out on 4/20). Since they were in Santa Barbara they covered Depeche Mode's "People Are People" then went into a totally different, aggressive and abstract version of “3 Libras”. The band later busted out "Counting Bodies Like Sheep to the Rhythm of the War Drums" with nothing but white lights shining from the backstage casting all the bands' shadows upon the illuminated and blinded crowd.

It was these moments, and so many more, that made this A Perfect Show to talk about, and it will be for years to come. Hopefully, you were there, and if not "So Long, and Thanks for All the Fish".