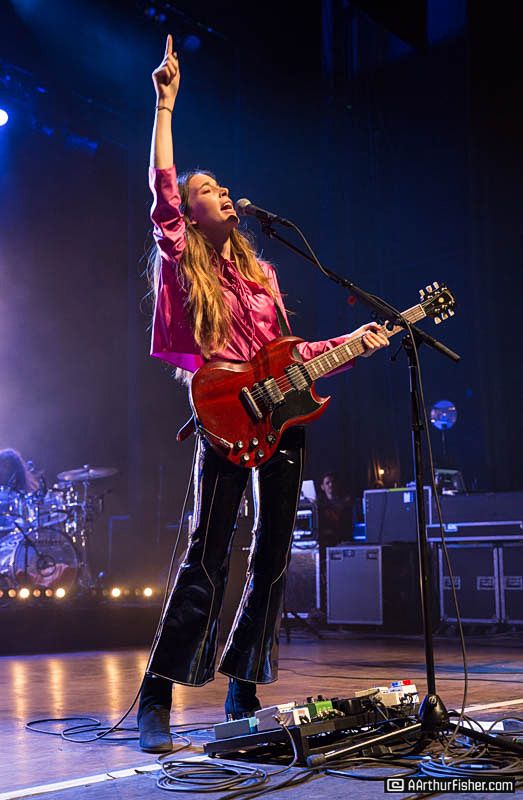 Written by A. Arthur Fisher on 10 September 2017 Posted in Event Reviews.

"Best International Band" as named by New Musical Express in 2014, sisters Haim packed the house on Saturday Night. Just a short drive up from "the valley," where the three siblings grew up, Haim ravaged the Arlington Theatre to a house of screaming girls. Scattered through the audience were soccer moms and cool-sauce dads, there to hear this eclectic group jam live.

Since I last saw these women live at the 2013 New Noise Festival block party down Santa Barbara's Funk Zone, the stage presence has certainly been polished. During that outdoor, street fest, just back from a European tour, they were donning jeans and leather. That attire has since been swapped for silk and vinyl; we're talking shiny black bell bottoms with stitching on the outside. Lots of bright backlighting and stage fog complimented the grounded-pop tunes, backed by full audience-participation in the chorus.

Like many other successful touring bands, Haim's live shows are known to carry a different sound from their studio music. I distinctly heard their classical jam-rock roots come through in their performance. One of the group's early influences was Santana, which they learned to cover in the family band, led by mom and pop when the kids were quite young. Take that classic rock jam, adorn it with powerful-yet-melodic female pop vocals, dress it up nicely with a stage full of instruments, and you have Haim.

I'm glad to be enjoying those catchy ear tunes still spinning around in my head.

Opening the show was Lizzy Plapinger, aka LPX. Hailing from New York, she was bopping around the stage with so much energy that my brain could hardly keep up. This powerhouse has hair as bright red as her pant-suit and doesn't let up for a moment. In an open floor venue, her tunes would easily be fuel for a rowdy mosh. She couldn't have been any happier and more grateful to be playing to the house, and that positive energy comes through in the music.