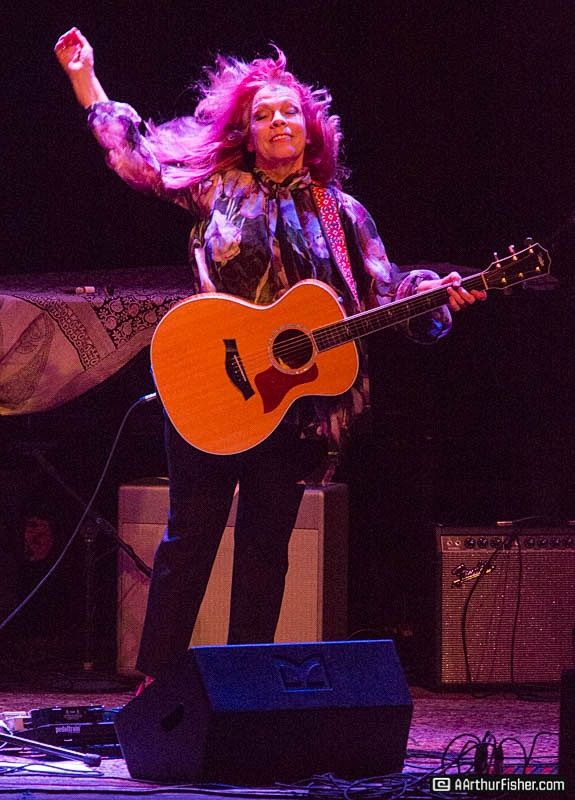 Written by Melissa Rapp on 19 March 2017 Posted in Event Reviews.

Peyroux opened the night, displaying impressive jazz guitar chops and well-trained vocals. When I lived in San Francisco ten years ago, Peyroux’s albums were a staple of tastemaker radio station KFOG 104.5 FM. It happened to be a foggy evening in Santa Barbara, and hearing her bluesy vocals fit right in. She performed with her trio, including an upright bassist and guitarist. Featuring songs from her newest album, Secular Hymns, the trio often sang in a lovely, seemingly effortless three-part harmony.

Peyroux’s set favored conversational-style lyrics and humorous in-between song banter. She said at one point, “I do three kinds of songs—love songs, blues songs, and drinking songs…this one is all three!”

Her set was overtly political at times. In one early tune, she acted out a phone call with Donald Trump. Later, she introduced a tune as “a song for the Democratic party,” then launched into “I Ain’t Got Nobody!”

After a full set from Peyroux, Rickie Lee Jones took the stage. Wearing a silky, flowing top and a beautiful Taylor acoustic guitar, she was well supported by her percussionist and guitarist. The audience welcomed her energy, clapping along before the end of the first song, and applauding after the frequent jams and musical experimentation by the band members.

Jones smiled frequently, moved on stage gracefully, and seemed much in her element. She told the story of why she moved from Los Angeles to New Orleans, and how she has found contentment in the city: “When I walk down the street, everybody looks me in the eye and says good morning,” she explained. “It makes me feel like I am part of the world—it’s hard to find that in Los Angeles.” After an impressive career spanning five decades, Grammy-winning Jones certainly deserves to enjoy her success in her new musical home. Having worked as a songwriter myself, I know that many musicians would love to have such a storied career.