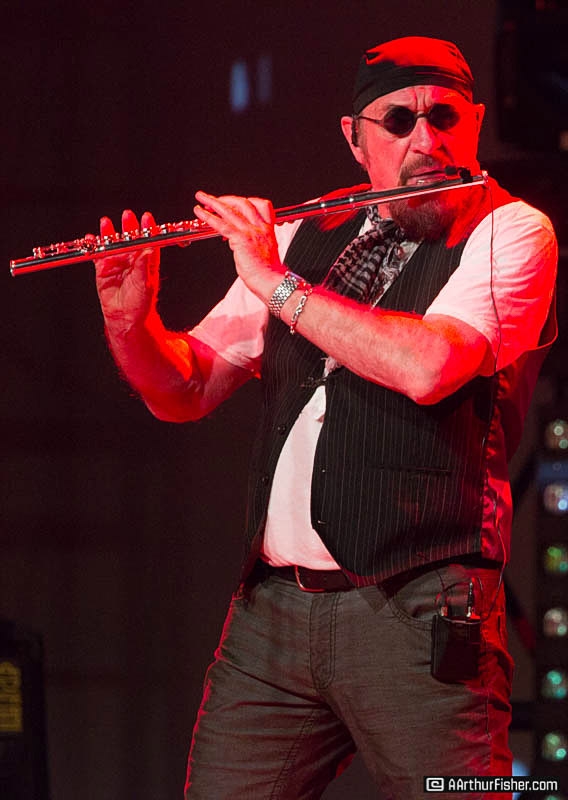 Although invested in his buttered concoction, even the youngest face in the crowd expressed excitement as he nestled into the red cushioned seats of the Arlington. The on-stage screen displayed a field of wheat swaying below a gradient of rich blue sky. Lights dimmed. Whispers of mixed expectations came to a halt. Dates from past tours hid themselves as the fans who donned them took their seats. “J. Tull. J. Tull. J. Tull.” As a dedication to his legacy’s namesake, Ian Anderson was about to present us with not just a show, but a performance. “Now presenting… Jethro Tull: the Rock Opera”.

I’m at an age where I was too young to have seen him at his best, but I relished the chance to see the legendary frontman at his now. That being said, I was unsure what the show would entail with Ian Anderson as a “solo” act.

Upon reading the press release for the show, I had expected more of a direct narrative that would intertwine the songs that created a foundation of loyal fans. I found myself mistaken as the show began. The first moments unfurled a torrent of pre-recorded news reports of weather phenomena and a clutter of plot introductions; unfamiliar faces appeared upon the screen singing similarly unfamiliar music. Although there were overlapping characteristics with the sounds of Tull, it was difficult to establish a connection with the show.

Nostalgic expectations were not met despite a few hits here and there (e.g. “Aqualung”, “Locomotive Breath”, and “Living in the Past”). Each original was met with thunderous approval and an energy that transcended the walls of the theater. I was taken back in time when the bodies around me rose and roared. But just for a moment. It made me wish for more.

The majority of the show consisted of Ian singing with co-stars who were not even present as they too were pre-recorded. Controlled scheduling was imperative to the “success” of the show as the on-screen actors/singers were not just there to complement. Timing was of great importance. I found it to take away from the spontaneity I personally so enjoy from a live musical experience. The interaction with the act and its audience is what cultivates the formation of an unforgettable memory. A show that relies upon a projection for its narrative and musical flow detracts from the raw melodic authenticity.

Various performers (whose roles within the opera no one could really identify) and a narrative that left me with a vague idea of an angry agriculturalist making a statement did not contribute to clarity. Individual portions of the show had the whole crowd upon their feet to the point where the floors had to have been sticky due to spilled drinks and dancing. With random hits played to satisfy the needs of fans poorly woven into a confusing ‘message-driven’ narrative, the show as a whole was… unexpected, to say the least.

Despite it not being the ideal experience, it was still one that I am glad to have taken part in. The intensity of flute-guitar interludes incited an excitement that had me shouting at noone in particular. I did not walk out of the theater with disappointment. Instead, I possessed a newfound longing to be taken back in time, fueled again simply by the energy of the crowd. Here’s to time travel via my next bucket-list artist.