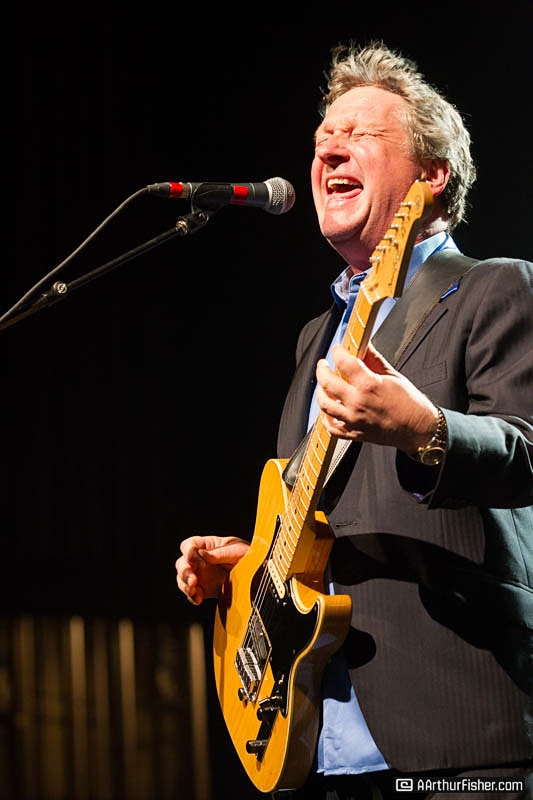 Millennial moms and dads showed up in force to embrace the timeless ‘80s nostalgia that is Squeeze...

Wait. True as that might have been Tuesday night at the Arlington Theater, that’s not fair to Squeeze, as this legendary New Wave era band is no nostalgia act. But with bands from this era, it’s their burden to bear.

Similar to Elvis Costello’s softer side and contrasting with the punk/ska hue of early New Wave, Squeeze laid down tracks not layered with aggression but the odd, ironic, unexpected and - like the Talking Heads -always pleasant! And perhaps that late 1970s thru mid ‘80s musical era flamed out too early, as the backlash from power chord rock and blues buried its subtler sensibilities. So indeed Squeeze’s early work reflects that small musical window that is now inevitably nostalgic, but still relevant and more needed than ever.

At their core, what sets Squeeze apart is the songwriting – yesterday’s and today’s. Twenty-first century popular and rock-oriented music is in dire need of beacons of hope, gold standards, to fight off the darkness of soulless lyrics and simple chord progressions.

Chris Difford and Glenn Tilbrook are of course the constant of Squeeze. It’s their band. Always was. They soldiered on thru break ups, make ups, recording “Squeeze” albums under different names, taking time off, recording solo records, doing solo tours, and finally getting back on track (this time since 2007). And today they’re everywhere, from touring to collaborating to social media to their considerable charitable work. (Check out their excellent website)

Both were born in London. Often compared to Lennon/McCartney, they too resemble the equally impressive British songwriting duo of Bernie Taupin and Elton John, who split duties in a similar manner. For the most part their craft emerges from Difford’s lyrics and the melodies and music of Tilbrook.

High points from any era of American/British music filled the theater, with “Goodbye Girl” and “Up The Junction” leading the listener thru a musical and storytelling journey; suddenly you’re sitting in a living room witnessing someone’s relationship first hand, much the way Ray Davies took us Americans into the inner lives of the working class post war London.

A youthful 59, Glenn Tilbrook’s voice is utterly identical to those early years of vinyl standouts East Side Story and Argy Bargy. “Hourglass” drove that point home early on in the fine 90-minute set, as he soared high above tight band.

Tilbrook’s silky smooth octaves have always contrasted with Difford’s deep and limited bass line in fascinating ways that both drive thru and float above the music. “Take Me I’m Yours” and “Slap And Tickle” make one wonder what they’d sound like a cappella.

Less known to casual fans is Tilbrook’s guitar playing. A fluid and poignant lead guitar rocked it thru improv jams of their most cherished songs. Literally 20 very talented musicians have ebbed and flowed thru 35 years Squeeze. The current lineup includes Simon Hanson on drums, Stephen Lange on keys and the newest member of the band, Lucy Shaw on bass. This is no rote group listlessly going about their business; they all seemed to be having their joyous moment in the sun.

And the songs kept coming: “Is That Love, Pulling Mussels (From A Shell),” “Cool For Cats,” “Black Coffee In Bed,” “Annie Get Your Gun” and, of course, the irony of their catalogue, “Tempted” – perhaps their most famous song, originally sung by well-respected keyboardist Paul Carrack, who hasn’t been affiliated with the band since 1993.

Quick note: loved Difford’s dry rendition of “Cowboys Are My Weakness” (reminds of Lyle Lovett’s “Stand By Your Man”) and missed not dancing to the “Farfisa Beat.”

New songs consisting of complex arrangements emerged on last year’s Cradle To The Grave, the title song a vaudevillian ditty and intentionally-nostalgic “Happy Days.” Both fit seamlessly into the setlist.

Difford, 61, says he and Tilbrook try to balance their concerts to satisify their many dedicated fans in attendance – who want more new music – and the “Squeeze bystander,” as he decribes them, out for a big night without the kids, getting all wet with nostalgia and dancing as bad as they did at their senior prom.

Chris, Glenn, keep it up. You’re still youngish and at some point the Classic Rock Baby Boomers will ride out to pasture (Sir Paul, Keith, Mick – right?!?), and you’ll emerge from their massive generational shadow.

The opening act was Look Park, featuring Chris Collingwood (of "Stacy's Mom" fame). A stripped down version of his other notable band, Fountains of Wayne, the new songs still have that Weezer-Nerd-Rock thing that’s comfortable, catchy and well done. Highlights of the new album included “Aeroplane” and “Breezy.”

This show was presented by Nederlander Concerts.