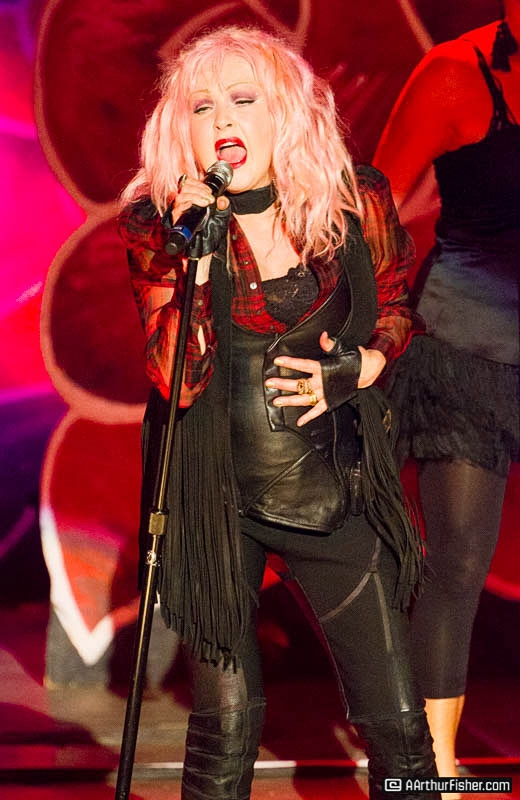 When Cyndi Lauper was a young girl, women didn’t have so many rights, at least not so many choices as they do now. In 1953 women just waited to be married. “What do you want to go to college for,” Cyndi said her Nana asked, in her heavy New York accent. “You’re just gonna get married.”

You can imagine that at the age of thirty when offered the opportunity to record “Girls Just Wanna Have Fun,” what an evolutionary process that was from the self-proclaimed freakazoid from Queens. Now at the age of 63, Cyndi Lauper is yet again recreating herself. On the “Detour Tour,” she’s still a lil’ more Rock ‘n Roll than Country.  But that’s a lot more Country than before.

Detour is a cover Country album released by Cyndi Lauper this year. That’s correct, an album of covers of Country songs from the hay day of Country sung by 80’s pop sensation Cyndi Lauper. Covers of songs from Wanda Jackson, Patsy Cline, and Patsy Montana to name a few. It is a lot to take in – and a lot of fun to see performed live.

Decked out in head-to-toe leather, during a heat wave in a theater with no AC in Santa Barbara, Cyndi was as cute as a country button and as hard as a girl from Queens. Opening with a cover of Wanda Jackson’s “Funnel of Love,” Cyndi’s distinctively unique vocals made it her own.  But it was surprising and unexpected (to the uninformed) coming from the pop star. What a detour indeed.

But it wasn’t all Country all night. Cyndi and her band infused the set with many of her earlier pop hits and even a cover of Prince’s “When You Were Mine” in recognition of his passing. The range of songs covered during the night truly spoke to Cyndi’s ability as a performer. Her voice seemed stronger than I ever remembered, begging the question – how much synth did they use on artist’s voices in the 80’s? Really. Her vocal range and strength was commendable, even while dancing around the stage and twirling on a revolving platform.  At the age of 63… in all leather… under house lights… during a heat wave in a theater with no AC.

As much as the singing impressed, it was the story telling that really hooked the audience. Taking her time between songs to tell her tales, Cyndi proved to be quite the comedian. She talked about “her evil cousin, Madonna” and even related “What Would Dolly [Parton] Do” to “What Would the Dalai Lama Do.” She infused stories of her family, speaking fondly of watching TV with her Nana, and later watching it hopped up on sugar cereal with her siblings. Heavily influenced by TV, Cyndi admits to reenacting Saturday morning Country Westerns and to trying to sing “like a Country star” at first. Cyndi then decided she sounded like she was having an “Ethel Merman sound off” and just embraced her own sound introduced in her first band, Blue Angel. And it works. Cyndi’s voice translates well into the country genre of that era.

Being the rock star that she is, Cyndi stopped mid-encore, insisting that the security allow the audience to get out of their seats and dance up by the stage. “What is this –  The Mormon Church?” Cyndi asked, again in her heavy New York accent. “People want to rock out. I could be sitting in a chair too – but I‘m up here bustin’ my ass.” Obviously, this detour into country hasn’t stopped this girl from just wanting to have fun.