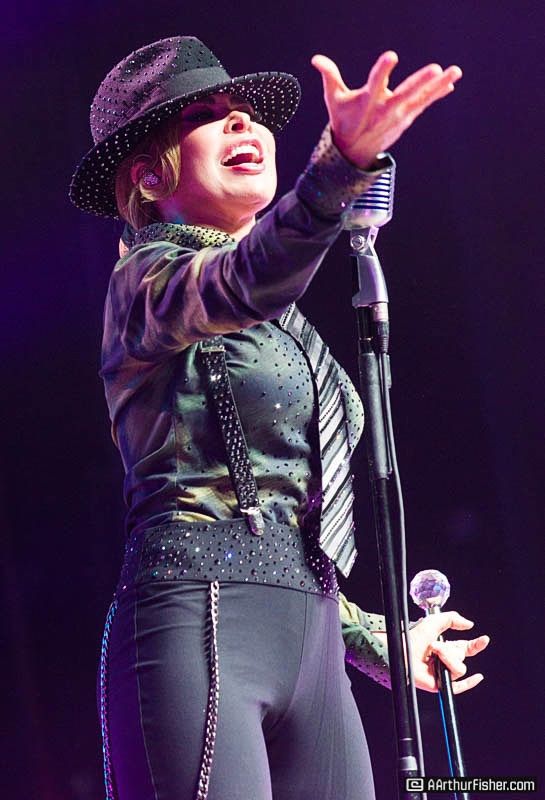 Written by Lyndsi Ibarra on 22 September 2016 Posted in Event Reviews.

Amongst a small orchestra, the woman of the hour walked out from the shadows as her own alter ego -- Mr. Trevi. Imitating her iconic El Amor album cover, the Mexican pop star showed up in a sexy sequined pantsuit complete with a dazzling top hat. Accompanied by bright lights, a full band and the harmonies of four backup singers, Gloria Trevi gave quite a show.

By the second song, the superstar infected the crowd with her enthusiastic energy as people young and old belted out the words to “Como Yo Te Amo”. Mesmerized by her powerful voice and seductive dance moves, attendees watched in awe of her performance. In search of “his” dream girl, Mr. Trevi pulled one lucky lady from the crowd for a special dance.

Significantly more interactive than most performers, Trevi took the time to share a toast with the crowd as she sipped on some red wine in between songs. With watery eyes, she thanked the crowd for their support throughout the years despite her incarceration over allegations of kidnapping and abuse. In celebration of her 12 years of freedom from jail, the singer encouraged everyone to vote in the upcoming election and continuously expressed her love for the Latino community.

The Mexican Madonna travelled back to the 90’s for her encore. With big hair, thigh-high stockings and a bustier bodysuit, fans rushed to get a closer look. Despite security guard efforts, attendees trampled the stage and received warm hugs and kisses from the sweet star.

At times I questioned if I was at a Las Vegas show. The bright colored lights and dresses shinier than a disco ball will do that to you. But one thing is for sure, Gloria Trevi is nothing short of glamorous and humble.