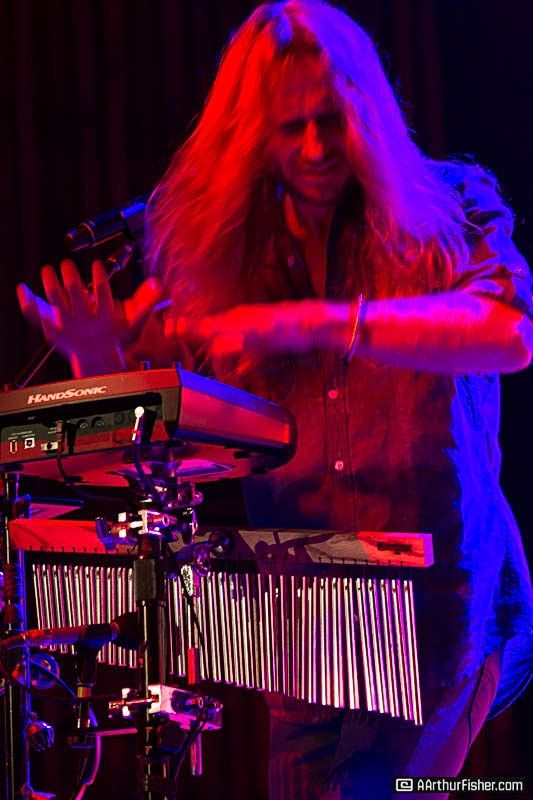 Written by David Palermo on 03 September 2016 Posted in Event Reviews.

Having been a Yes fan since 1972 I was looking forward to this show. I had seen the band play throughout the years in all the band’s various configurations. Founded in London in 1968 by Jon Anderson and Chris Squire the band is a pioneer in Progressive Rock. For those youngsters reading this "Progressive Rock" is a rock music sub-genre that originated in the United Kingdom and United States throughout the mid to late 1960s. It developed from psychedelic rock, and began as an attempt to give greater artistic weight and credibility to rock music. Much of the music is classically influenced. Songs were replaced by musical suites that often stretched to 20 or 40 minutes in length and contained symphonic influences, extended musical themes, fantasy-like ambience and lyrics, and complex orchestrations. In other words big symphonic rock music that can be mind-altering!

The show started right on time and lasted for 3 beautiful hours! I have seen yes maybe a dozen times, been backstage, am a friend to the original founder and lead singer, Jon Anderson and I usually wouldn’t want to attend this particular show. (Jon is no longer with the band… more about that later.) After all this line up only had one original member - guitarist Steve Howe. (Long time member drummer Alan White is also part of the current lineup however he was out recovering from back surgery). Anyway, I thought about not seeing this show but the choice of the music they were going to perform piqued my interest. This tour is for hard-core Yes fans! The band was going to be performing 2 movements from their 1973 album, "Tales From Topographic Oceans” - each song is longer than 20 mins. The first song from that LP was "The Revealing Science of God (Dance of the Dawn)”. An amazing song that is not only great in headphones but “live” as well. The second piece from this album was "Ritual (Nous Sommes du Soleil)”. Another incredible song but neither of these two songs are very appealing to the average Yes fan whom may have grown up with “Owner Of A Lonely Heart”- a catchy melodic hit in the 80s.
Yes also played the entire 1983 “Drama” album which was an odd (but critically well received) album. “Odd" because it was a major change for Yes at the time. Jon Anderson co-founder and original lead singer was not featured on "Drama". That alone made things “odd” because Anderson’s voice is a key sound to Yes. If you have ever heard his voice you’d get that. No wonder the album was named “Drama”.
A nice surprise happened just before the last song from the Drama album… Steve Howe introduced a “special guest” who will perform the vocals on the last song, “Tempus Fugit”. That guest was Trevor Horn who did all the lead singing on “Drama” in 1983 when it was released. Horn, if you recall was with a band called The Buggles. (The Buggles recorded “Video Killed The Radio Star”, and it was the first video ever played on MTV.) I heard that “Drama” was never performed in it’s entirety so that was cool. I overheard some people trying to remember what the Drama album was like. They and never heard any of it. Yes also played a few more popular songs such as All Good People, Roundabout, And You And I, and Starship Trooper.
Now, about Jon Anderson, the original lead singer and co-founder of Yes. He has a very distinctive alto tenor voice (according to Anderson). His voice, to many, (myself included) IS Yes in many ways. So when I learned a few years ago that Jon is not with Yes any longer I decided I really didn’t want to see them. Yeah I am kinda snobby that way, I guess. It’d be like seeing The Rolling Stones without Mick Jagger.
So when this Yes show was announced and coming to locally to The Arlington I decided that the music alone was worth seeing/hearing “live”. After all Steve Howe and Alan White - two long time members would be performing. Billy Sherwood, I had also seen and heard play (he was previously with Yes and is also great bass player). The new lead singer Jon Davison replaced Jon Anderson as the lead singer. I didn’t know about him and in all honesty wasn’t too excited. To me Jon Anderson was integral to Yes. But I decided to give him a chance. He didn’t disappoint! At times he sounded very close to Anderson and I didn’t have to close my eyes and imagine Anderson singing. If you know Yes, you know that there are many very high notes in Yes’ music. And it’s difficult to hit those high notes. Jon Andeson is “the" voice of Yes and Jon Davison nailed it.
Yes’ other founding member, Chris Squire, who passed away last year, played the bass like it was a lead guitar.  He is greatly missed. Squire had a big personality on stage that simply can’t be replaced. Sherwood performed Squire’s bass parts and did it with finesse. That was another nice surprise.
Steve Howe, one of the longest members of Yes is a master guitar player and pretty much leads the current band. He’s been performing with Yes on and off (mostly on) for over 45 years.
The encores were Roundabout and Starship Trooper - two old favorites of Yes fans. Especially the hypnotic finale to Starship Trooper called “Wurm”.
Overall the show was amazing. I think from what I observed everyone who attend the show came out loving it! The choice of songs was risky perhaps but very rewarding to those who know and love Yes.
Jon Anderson has recently announced a new band, ARW, (Jon Anderson, Trevor Rabin, Rick Wakeman), all former members of Yes. It will be interesting to see what happens when they start touring later this year. I’d personally like to see the remaining “core members” of Yes get back together - Anderson, Howe, Wakeman, and White. You never know…
Yes’ current 2016 lineup is as follows: