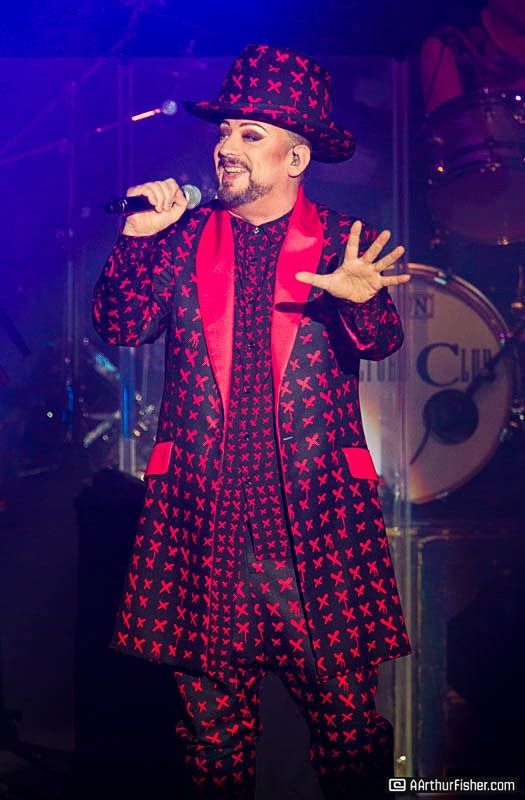 Written by Jenny Schlax on 30 August 2016 Posted in Event Reviews.

What is it about time that heals all wounds? I guess there must be something to it because Culture Club, once known for their turbulent dynamics, is now one solid zen machine thirty-five years later.

Walking onto the Arlington Theater stage in the little town of Santa Barbara, Boy George beamed enlightenment like a different man. Change has definitely occurred. Boy George (vocals), Roy Hay (guitar), Mikey Craig (bass), and Jon Moss (drums) make up Culture Club, one of the most influential groups of the 80’s. Decked out in fabulous outfits, the original four were accompanied by eleven extra players which included a horn section, an extra drummer, as well as three fabulous back-up singers. They were now a super group, fully professional and a delight to see.

“Roy used to live here,” Boy George announced. “We are playing to most of his friends – the first 20 rows.” It’s a miracle there was any place to dance in the packed crowd. But dance we did. “There are 3 rules of Culture Club: 1 – dance like no one is watching; 2 – dance like you don’t give a shit; and 3 – love more now.” So stated Boy George, so complied the crowd as they began to tumble for him.

The group looked like they were thoroughly enjoying themselves, like they were truly grateful for this very moment. And Boy George’s voice – his voice was incredible. Deeply soulful and strong, his voice took you to church. He and the band continued to interact with the delighted crowd, with Boy George stopping between hits to give life lessons. “What is it about my obsessive behavior that turns you off?” Boy George laughed, “I stand here as a cured individual… I don’t do emotion like I used to.”

Apparently they all don’t. Culture Club’s happiness was infectious, raging through the crowd like a disease and taking us over, making us dance like we were 15 again. “There’s too much to really let go, by the end of the evening we’ll have you all dancing!” They continued to play one hit after another, and just when you thought you had heard them all, they played yet another, making us miss them blind.

Throughout the evening there were two wardrobe changes – Boy George wouldn’t be a diva if he did any less. There was more than silence during these interludes, enough to let the saxophone get in a solo and allow the other guys to jam. Showing great gratitude, Boy George later thanked MTV for spreading their music to the US, with the likes of Duran Duran, Tears for Fears, INXS, Prince and Pat Benatar. As part of the gratitude speech, Boy George mentioned that their first single was released in what is called a white sleeve, which is just blank, allowing their music to be heard without any judgement on the band’s appearance. Laughingly, he said their image just hit the public too late, people already liked them. “People have changed… but haven’t” in that regard. But that didn’t make the crowd want to hurt him.

At the age of 55, Boy George says he understands life better. “In reflection, I have many regrets,” he stated, “but I can’t think of one.” His karma is clear.