Jerry Seinfeld: The Man is Truly a Master 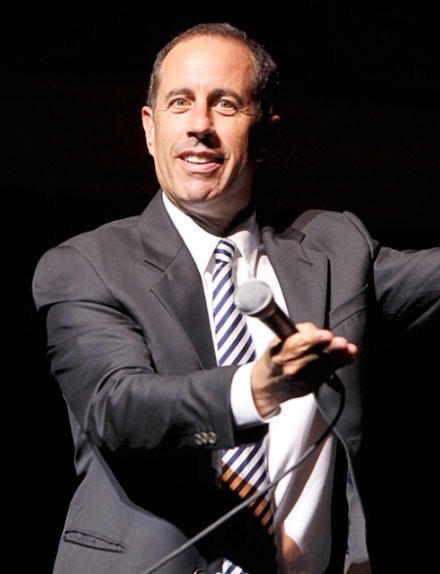 Jerry Seinfeld, 61, and proudly in his “favorite decade yet” bounded onstage to greet his audience, a commingled sea of white haired couples and 30-somethings. I however sat in the mezzanine, amongst pairs of 20-somethings who scraped together the dregs of their checking account to see a priceless performance from a top shelf comic. When his voice rang out on stage after an unusually short opening act, it took a moment for the audiences’ disbelief to wane. This wasn’t a television show, we had Seinfeld so close we could smell the starch on his white dress shirt.

The historical feel of Santa Barbara’s largest performance theatre plays well into Seinfeld’s class act persona, and highlights his talent to weave generations together using squeaky clean, intellectual wit. This set featured both new material and classic premises. Seinfeld subtly commented on the current Presidential race needing only one swift side comment to erupt the crowd before casually moving his act forward. His fresh reinvention of the U.S. Postal Service business model was delivered with a thick layer of his trademark conviction, obsession with the tiniest detail, and heightened to the beloved emotional exasperation often found in his record-breaking television show. He didn’t disappoint visually either, taking to the ground, spread-eagle in his crisp navy blue suit and tie, in order to send a punchline home.

Seinfeld is known for his observational banter. Banal life experiences are merely examples to extrapolate his greater life philosophies. The audience took away an especially brilliant perspective when Seinfeld dissected the difference between a life which seemingly ‘sucks’ versus a life that’s seemingly ‘great.’ The clarity of his comparison convinced us that his huge celebrity status doesn’t make life any easier for him to navigate, either. Among the rolling laughter, the audiences’ only other audible reciprocation to the performer was an outburst of, “So true!” between their fits of laughter and deep breaths. A meager attempt to express the solace found in his distillation of modern life and gratitude for his craft.

He first scampered off stage during the residual roar of laughter that ensued from his final joke. Seinfeld then returned for his version of an encore, an impromptu Q&A with the crowd. He repeats the question, “What kind of car do I drive?” and quickly responds, “Whatever I want.” A smart reference to his web series titled, Comedians in Cars Getting Coffee. He then scurries off stage for the last time, leaving the audience marveling at his paradoxical mixture of street level experiences and smug self-awareness, earned through 40 years of performing stand-up comedy for a living.

The transition-less, 75 minute monologue had the audience exiting the theatre already quoting their favorite lines, albeit, clumsily. Appreciation for his economy of words and effortless delivery was only realized when put into practice. A professional makes it look easy. A master makes us think anyone can do it. 2,000 Arlington patrons left the theatre researching ‘open mic nights 93101.’