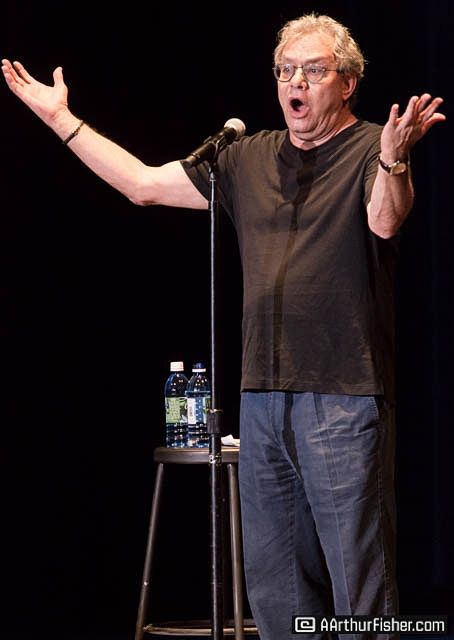 Written by Jenny Schlax on 16 September 2015 Posted in Event Reviews.

Lewis Black Turns Up The Heat

For a city that normally does not have weather, it was a hot one in Santa Barbara on September 12. A fact that did not escape comedian Lewis Black, stopping by the Arlington Theater on his “The Rant is Due, Part Duex” comedy tour.

Third day into the tour, one could already tell it’s been a rough one. Opening act John Bowman was all piss and vinegar with the Santa Barbara audience, who had been waiting patiently in an historical theater with no air conditioning for the duo to begin. As Bowman started into his material, the heat struck him and he started to strip off his jacket and roll up his sleeves. “It’s lovely you have this show in this quaint historical building… why don’t you get rid of the organ player and GET AN AC UNIT?” It was obvious the opener was as grumpy as the headliner. “I wish Lewis Black was really going to be here – he’s not, IT'S TOO HOT!”

The audience was obviously familiar with Lewis Black, and knew what to expect from one of his live shows – extreme grumpiness emphasized with a bit of screaming and profanity. Bowman’s detour from his pre-planned material to something more topical that was actually affecting the audience at the moment was welcome comic relief from the balmy heat.

As Lewis Black took the stage, it was apparent he too was feeling the heat. Usually a man to dress in a collared shirt and sports jacket, he slowly walked out on stage in a rumpled black t-shirt and jeans. “I had a terrific ensemble to wear… cuz I know how f-ing fashion conscious your village is… But I saw John on stage and I said 'F*CK IT!'”

Coming back from three weeks of vacation, Black pre-warned the audience that he might just “start staring off into space” at any given moment. However, this action never transpired.  Black spoke of his adventures abroad, stating that everyone in the U.S. needed to get the f*ck out of here and go to another country, otherwise we all will continue to believe we know what we are doing. “They have solutions, better than ours… and they DON’T EVEN SPEAK ENGLISH,” Black exclaimed, wiggling his pointer finger at the crowd in his signature manner.

As is his practice, Black made the already heated atmosphere more heated by jumping into politics. “I am a Socialist… Don’t applaud – I WON’T have you applaud. I am DISGUSTED that I am.” But the crowd applauded anyway. “When I think of Socialism, the first place I think of is Santa Barbara,” Black teased the audience.  And Santa Barbara took it – it was hard not to, they were paralyzed by the heat.

But Lewis Black did come with a message. “If I have one message for you to take home tonight, it would be… go to Tahiti.” To that the crowd gave pause. “Oh, but why would you want to leave Xanadu?” Apparently, the Polynesians don’t give a f*ck, and after 14 days, the amount of days required to stay in Tahiti to save your brain according to Black, you won’t either.  Of course, after this lovely message, Black jumped right back in to politics.

Black was intelligent and thought-provoking, as he continued to emphasize his messages by yelling, cursing, and wiggling his fingers as the crowd. No subject was off limits with Mr. Black, ending his night with gratitude and sarcasm, “Thank you for sharing this BRICK OVEN atmosphere.”