Chappelle’s Show…. and Tells at The Arlington 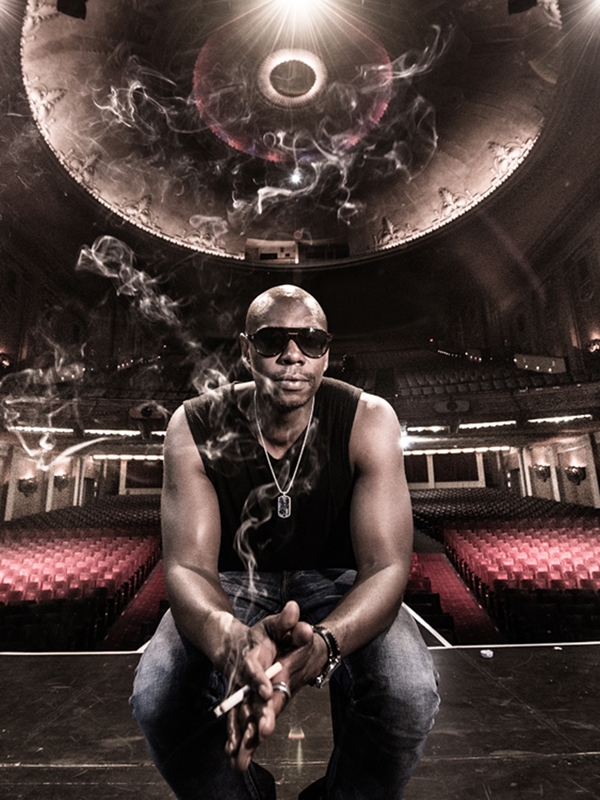 After his 10 year sabbatical from the limelight, everyone, including Chappelle, seems to be surprised to find themselves at a Dave Chappelle show. Chappelle, like a captain manning the helm, mounted his leg on the monitors, and navigated the waters of Race, Religion, Sex, and Love, cracking up audiences for both the 7:30 and 10 PM shows Wednesday at The Arlington.

Even if you’re a seasoned stand up comedy fan, you’ve never seen a show like Chappelle’s. Instead of being introduced by your typical MC, DJ Trauma treats the audience to a hype session, bringing the energy to a feverpitch before raising the house to its feet before this improbable show. When Chappelle enters he takes cool, long drags on his cigarette, and begins like he’s gathering around a late-night cup of coffee with 2,000 of his closest friends. “Santa Barbara, it’s good to be back. Man have I missed being around over-privileged white people. I feel at home.” He chuckles to himself, slapping the mic on his knee. The amount of energy convincing us we should find him funny is basically nonexistent. What exists instead is the invitation to see things through his eyes and to witness how Chappelle, a 25 year stand up veteran, sees the world.

And how does Dave Chappelle see the world? Sideways is one way to put it. Whether it’s Paula Deen or the Charlie Hedbo attacks, the commentary is always beyond the left/right or black/white dichotomies that dominates many of these kinds of discussions. He points out ironies like shooting down clay pigeons. On Paula Dean: “How are you gonna call me the N-Word, when you taught me how to make fried chicken?” On the Ray Rice video : “If that was Michael Sam and his boyfriend in the video, would it be domestic violence or just two dudes working it out?” This knack for demystifying and transforming the delicate into the pithy and hilarious is exactly why no seat goes unfilled.

However, the rarity of this packed house seeing Chappelle does not go without its price. Tickets starting out at 75 dollars and spiraling upward from there are, in fact, a bargain considering the cost Chappelle has already incurred (turning 50 million dollars from Comedy Central for a third season of his hugely successful Chapelle’s Show) in order to keep this show intimate. And if 2,000 seats does not seem intimate, consider that Chappelle recently completed a 10 show run at Madison Square Garden, a 14,000 seat venue. You can tell the audience is acutely aware of the value of this show. Any attempt at an injection over Dave gets shot down with a chorus of “Shhh” and “Shut up.” The audience’s vigilance over the show that cost them a days pay is so effective I see Security take a breather to catch the show only to have to catch their breath again in between their sidesplitting chortles.

As a performer Chappelle is unflappable. You can see his seasoning as a performer when he times his jokes so precisely in conjunction with the lighting of his next cigarette. He waits until the truly thunderous laughter rolls through the audience before he sparks up and take a long drag so the show can continue. “The school my kids go to is so liberal that there are 12 black kids, and I’m the only black parent” he jokes, lights, and smokes. In this way smoking is less a compulsion and more of a punctuation from punchline to punchline. Joke: Light: Drag: Joke: Drag: etc.
Even more impressive is how not a word seems disingenuous or rote. While some comedians may shoot for the punny or ridiculous, Chappelle is extremely conversational, spending long contemplative moments to gather his thoughts mid-performance. This gives the 7:30 show the feeling like we are getting a random sampling on what’s on his mind right at that very moment. The 10 O’clock show, however reasonable a sense of ennui in Chappelle would be , is a near carbon copy of the seemingly extemporaneous conversation just an hour before, just as cool and introspective. 2,000 more are effortlessly entertained, ebbing and flowing between bolt upright at attention and bent over in stitches. 2,000 more leave The Arlington temples throbbing, cheeks sore, hoping it won’t be 10 more years.