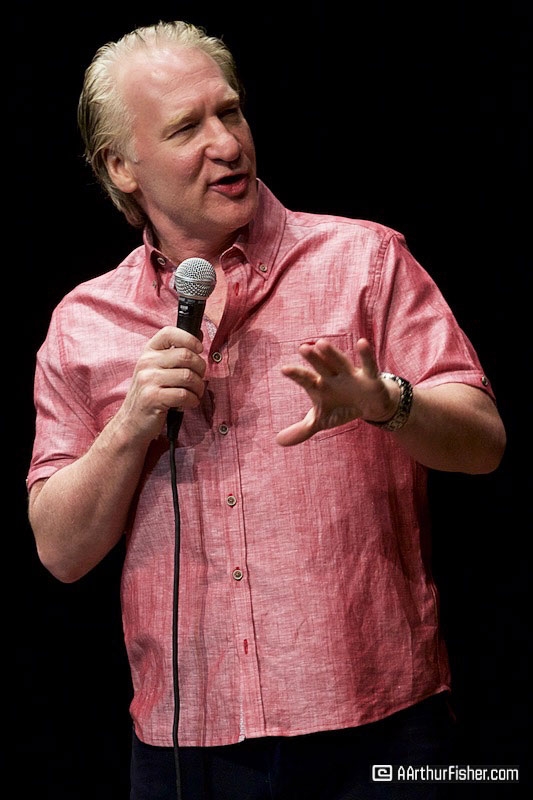 Even though The Arlington is split very neatly into a right and left section, when Bill Maher struts onto stage moonlit with his “Real Time” theme music, everyone is on the left, so to speak. This night will almost certainly be lost on the politically illiterate in the audience as he tours the American political landscape, lampooning everything from Benghazi-gate to Ronald Reagan.

Maher begins tongue-in-cheek, sardonically commenting “I don’t want to get political, but...” The hoots, hollers, cheers, and jeers, along with running chorus line of rumbling laughter, it would be much more accurate to call tonight a political rally. Bill Maher, with his slick, platinum hair roasts everything in his path. “I guess tonight, I’m The Decider” he says, mocking George W. Bush. The audience is so primed for this type of humor, even the set ups for jokes get big laughs. He lands a punchline on Sarah Palin and the crowd explodes with laughter. Maher’s reaction to this is to calmly lick his thumb and leaf through his libretto for another of his best Ba-Da-Bings.

It's unclear if there are any Romney voters in the seats. Maher certainly hopes there are. “Where are the conservatives tonight? I want to reach out to you!” Only crickets are heard. Maher continues to say whatever he wants about Republicans, knowing full well that true conservatives are staying at least 500 feet from this event. He seems like he’s only asking as a courtesy, perhaps to see if there’s real flesh and blood behind the strawmen arguments he spends his hour and half tearing down. You can tell he’s not just joking when he bashes Bush in front of 2,000 liberals. It’s easy to imagine that he would be just as staunch in his beliefs even if he were barking at a crowd of Morning-In-American Reaganites.

Maher’s act is also refreshing critique of contemporary liberalism in America. His quips about President Obama are Fox News-esque, but because they’re coming from Maher and not Bill O’Reilly the crowd remains free of hissing. Maher often uses his show like a speakeasy for liberalism and when he turns around to criticize liberals the crowds laughter because a bit more viscous. This part of the show seems to be the most important, however, because it stops the momentum just long enough to feel like Maher is doing real work as a comedian and not just riding the waves of what everyone came here to hear. He sinks in knowing his beliefs in Liberal ideals are strong enough to poke and cajole and smirk at.

In the last 20 minutes of his set Maher transitions to lighter material: Life, Love, Sex, and Death. And though he doesn’t deliver it with the same raw intensity of a campaign stump speech, the audience is still all about him. In truth, nothing Bill Maher jokes about is light or simple or often even funny by nature. However, what makes Maher a master of his craft is his ability to take the heavy and make it hilarious, disguising salient criticisms as good ol’ fashion yuk yuks. All these ironies and contradictions Maher has pointed out tonight are ones we often have to manage and pretend aren’t there each day in order to just get the job done. The truth is that everyone here actually has purchased a Bill Maher ticket, parked their cars, and found a babysiters to in order slow down, look, and laugh at what’s much more easily ignored.