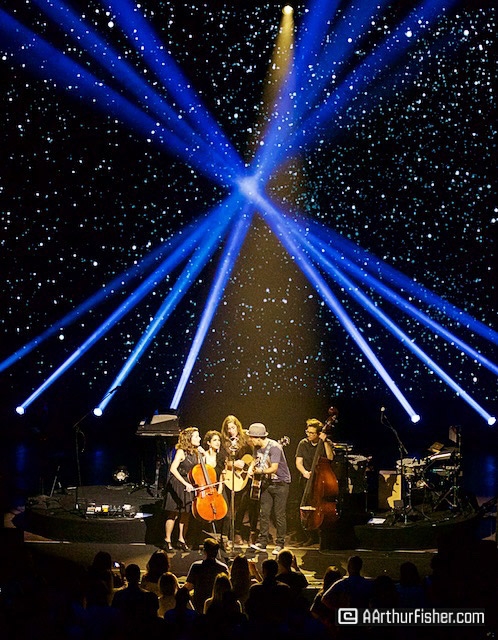 When a backlit Jason Mraz took the stage, the commodious Arlington Theatre transformed into an intimate San Diego coffee shop open mic circa 1999. We hear a single strum from Raining Jane behind him and the crowd hushes each other as not to add anything but deliberate silence to the musical accompaniment they are patiently drooling over.

It’s possible all you know about Jason Mraz is that he writes love songs.

“I’m Yours” and “Lucky” featuring Colbie Caillat, were massive hits for the singer-songwriter back in 2008, and though songs like these typify Mraz’s catalogue,

the love songs he sings aren’t strictly about romantic love. With a massive swirling sun silhouetting him, he sings “93 Million Miles”, a ballad written to the beauty of the universe. To a slide show of his home garden, he serenades us to his affection of food. And while a video of his Antarctic voyage runs in the background, he jams about his loving conservation of this beautiful planet of ours (this one getting a particularly rousing ovation from the eco-conscious Santa Barbarians in the audience). Though it seems self-evident why he sings love songs, Mraz lets us in on his writing process. He tells us “My songs come from feeling insignificant”, the irony not lost considering how much this man means to this many.

The show rocks back and forth between modest and orchestral. What starts out as a 5-piece band headed by Mraz shifts quickly into a barbershop quintet behind an old-fashioned ribbon microphone, with choreography to match. Simply put, Mraz is a vocal contortionist. His voice can dig to deep, buttery lows, and then on a dime, pivot to high, running falsettos like operatic Van Halen-esque guitar solos on helium. The backing vocals from Raining Jane are no less impressive, buttressing Mraz with sweet and sonorous harmonies, like a creeping band of greek sirens. When Mraz plays solo I swivel my head around the auditorium to see if there are any other musicians tucked away in the rafters playing along with him because of how complete he sounds on his own.

Mid-show, the older woman on my left taps me on the shoulder and asks me indignantly “What’s so good about this?” She doesn’t get it. I guess what she’s missing is that Mraz doesn’t play his shows like it’s his job or even his show.  His constant insistence to connect with his audience, finding himself in them, makes it clear that he’s here tonight to share this show with us, like they’re our songs too. The thing we are calling on Jason Mraz’s songs to do is to help witness what we are all probably walking around screaming in our hearts each day. All Mraz has done is taken the time to bring it out into strums and hums so that we may all experience  it together. That’s what’s so good. She still doesn’t get it.

The show moves on to the hits. Knowing that with a few taps of their thumbs the audience could easily hear album versions of  “Lucky”, “I’m Yours” and “The Remedy”, Mraz instead opts for versions that are local to tonight. Between the playful humor, anecdotes about his writing process, jazz scat jams, and a cosmic light show (all after a much earned intermission mind you), our encore arrives.  Playing his 2012 hit  “I Won’t Give Up”, Mraz again reminds us why you won’t see him at LeStats Coffee House in San Diego anymore. When he belts out the high, squealing notes of his closing song, it’s clear he’s not breathing just oxygen. The runs here are so long and bombastic, this song might as well have been written solely with his diaphragm. His voice stretches out over the audience a final time and you get the sense that he’s actually singing to his next audience waiting for him in Beijing, China, so that when he gets there he might finally have a moment to catch his breath.