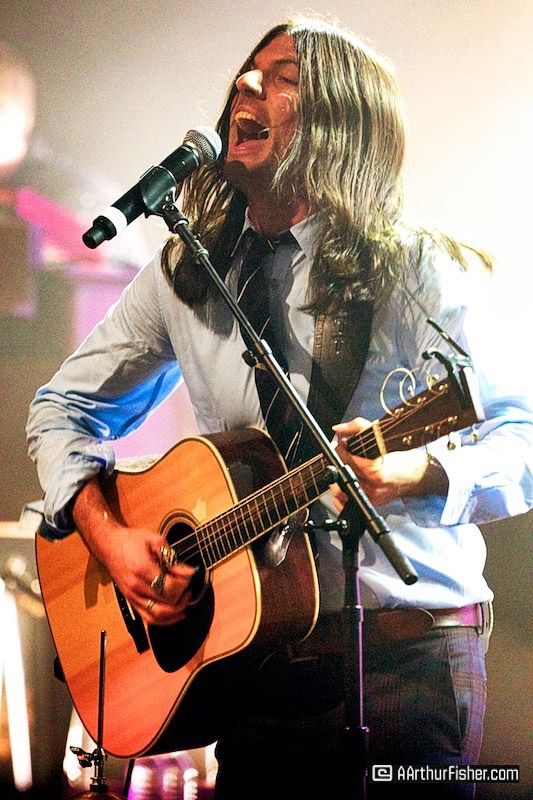 Written by Bill Buescher on 24 February 2015 Posted in Event Reviews.

Brother’s Keeper: The Avett Brothers at The Arlington Theatre

Playing to a packed house of what might as well have been a family reunion, the Grammy-nominated Avett Brothers jammed their own brand of genre bending neo-folk at The Arlington Theatre Tuesday night.

The brothers, Seth and Scott Avett, along with their consortium of classically trained hard-rock musicians (Joe Kwon on Cello, violinist Tania Elizabeth, bassist Bob Crawford, keyboardist Paul Defiglia, and Mike Marsh on drums), spared no strum, note, or emotion whilst playing to their strong Santa Barbara allegiance. You get the feeling that this show is not just a show to them. Opening with “Go To Sleep”, a dour ballad about tough choice and deep regrets, the brothers began their set singing to the standing aisles of The Arlington pleading “I hope the crowd will understand.” We certainly seem to.

When you arrive to an Avett Brothers show, it’s hard to the miss the flock of couples that fill the rows. Asking them tongue-in-cheek “Who dragged who here?” the response was a resounding “Both of us”.  “Who discovered this band?” I thought, and in attempting to trace the genealogy of the band from fan to fan, you quickly confront of labyrinth of how a friend’s ex-boyfriend’s brother’s sister’s aunt’s step-roommate showed them to somebody once, all this likely leading back to one of the Avetts themselves. One last note on Avett devotees: It’s hard to ignore that each of these fans likely holds some intense cognitive dissonance about this band, both believing  “How the hell aren’t these guys bigger?!”,  while simultaneously being suspicious of anyone new horning in on the genuine intimacy the Brothers bring to their shows, like you yourself are being gently serenaded.

Had you never heard The Avett Brother’s before, their 24-song set list for the evening gave a wonderful indulgence of the band’s eclectic back catalogue. We get songs like “Live and Let Die,” which showcase The Avett Brothers’ literacy in classic folk music, songs like “Love Like Movies”, a sweetly incisive bluegrass tune, and even songs like “Kick Drum Heart,” that border on punk rock, like if Green Day played the county fair. The overarching theme of their music is near perfect reflection of what the fandom has reported to love, pure authenticity. Lyrics like “It’s a fake, it’s a con, the nature of the road you’re on” from “Another is Waiting,” or “You can’t be in love like the movies, cause in the movies they're not in love at all,” show us that these guys are trying their best to see the world with clear eyes and not dupe the audience (or themselves for that matter) with sheen or gleam.

You want me to be truly honest? Without being a salesman for their next tour, The Avett Brothers’ performance is strictly mesmerizing. Joe Kwon grinds the strings of his cello like he’s trying to saw it in half and divvy it among us like King Solomon. Defiglia’s bass and Crawford’s keys fill the room to the rafters, all while Tania Elizabeth’s fiddle weaves in and out of each song’s melody like it’s trying to sing along. The banjo gets plucked like it needs grooming and each guitar string and drum skin get pounded so incessantly that there are moments when you forget these guys are from the gentle part of North Carolina. You can call what Seth and Scott do on stage singing, but more often than not it seems more like a deeply affected and meticulously rehearsed Shakespearean soliloquy. This is all accompanied not only by some seriously intense musicality and musicianship, but also by a neatly choreographed chorus line and iridescent lighting. No ounce of showmanship is spared.

In what seems like no time at all, this family reunion settles in for a close and the staged is cleared. After a lengthy stay of suspense, The Avett Brothers return for an encore, playing their most popular song, “I and Love and You”, to close out the evening. The audience rises to their feet one last time and we all say goodbye with the most beautiful words of the evening. The Brothers sing to the audience the words I and love and You, and like an echo chamber, we share their words back to them.