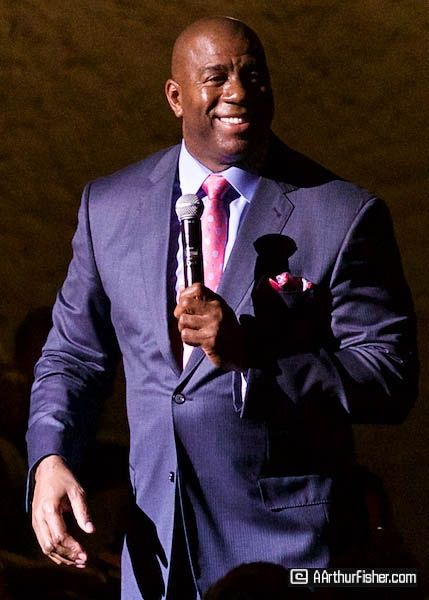 Written by Bill Buescher on 24 October 2014 Posted in Event Reviews.

If you’re asking yourself if the 12x All-Star, 3x MVP, and 5x NBA Finals Champion Earvin “Magic” Johnson, who stands a modest 6 feet 9 inches tall could possibly measure up to his accolades in person, please allow me to assure you that the idiom “Look up to your hero” never felt more true.

In fact, it’s nearly impossible to describe man without the tired metaphors and tropes of the sports hero considering he may as well have created them. 1992’s “Dream Team” notwithstanding, Magic has now been out of the NBA as a player for 18 years and in that time he's done nearly everything he can to make his accomplishments on the hardwood seem meager. And as he sauntered up and down the aisles at The Arlington Friday night, he re-animated the hackneyed cliches and passed to us his words of winning.

(Be advised however that the temptation to slather this review in a prime selection of “Magic” entendres may overcome your lowly correspondent.)

Firstly, Magic doesn’t spend a moment on stage. While pacing the by the packed rows he preached about all the things that might have made your eyes roll in seventh grade basketball camp.  “Winning is about teamwork”,  “If you put your mind to it you can accomplish your dreams”, and “You have to believe you can do it against all odds” were his gospels for the evening. To the hardened cynic these may have seemed like banal aphorisms. However, to MJ the power of hard work, dedication, teamwork, and the fundamentals are not just trite maxims, but a  religious-like center that is the basis his success, on or off the court. Don’t believe me? Who else would pick a wife because she would hit three pointers with him at 2 AM on their first date? That’s dedication.

No matter what Magic details for us, it feels like self-aggrandizing, which may be why we’re here. He talks about his back to back championships, both in his MVP rookie season with the Lakers and beating Larry bird at the NCAA championship in 1979. His 13 All Star appearances, his 10 NBA Final, his gold medal 1992 Olympics in Barcelona, the accomplishments are ceaseless. His precociousness as an All-State champion in high school stands alone to humble the adults in the room. It’s clear that setting his mind to basically any goal and achieving it is what would seem only to him as a little hard work, but by anyone else’s standards might be a herculean effort.

And damn is he a good speaker. Thank you, UCSB Arts & Lectures, for bringing Magic to Santa Barbara. His voice is not once strident or ill-composed. If he suspects for a moment that the audience may not be with him on engage he doesn’t just power through. He cajoles the everyone with his stories, bringing the mic to their face and bringing them into his narrative themselves.

“What’s your name?” he demands.

You can tell the audience is more than a spectator to this mans life. A single mention of a hookshot from from a 1987 playoff game against the Celtics gets the house riled up. All invocations of the late Pat Riley receive a hearty ovation.

What’s on equal display for the evening is Magic’s business acumen. He insists upon the adage “A winner wins” because he knows that the sort of grit and gull it takes to dominate in the paint doesn’t stop when the shot clock buzzes. Magic Johnson’s  net worth now lingers around a half of a billion dollars and for a reason. His personal enterprises range from food services to facility management, including once owning the Los Angeles Lakers and now currently owning a stake in the Los Angeles Dodgers. Health clubs and Movie theatres grace his name. To this day he is still the only person to have ever franchised any Starbucks Coffee shops. This sort of wealth accumulated by a man who tells the the young people in the audience “you better cut those coupons”.

Strangely, the conversation about Magic’s struggle with HIV remains conspicuously absent from the evening.  It’s hard to imagine why such a legend who has spent the last 20 years raising awareness of HIV/AIDS would neglect using his bully pulpit to inform 1,500 more.  One could easily make an issue out of this, a narrative of denial or shame, of Magic trying to recast his legacy devoid of what may seem like a blemish. However, hearing the man speak for himself with grace in his accomplishments brings the oversight into context. Because the fact is that for Magic HIV/AIDS is the context. It’s the assumption, the constant headwind of the last 20 years which has made his success in basketball, business, and family so impressive. In this line of thinking, he also neglects to mention his struggle with discrimination in a still racially segregated America, nor his battle with gravity as he, for 13 seasons, defied the very laws of physics each time he took his colossal body to the air.

A question: How well-documented is his generosity, exactly? I can’t be understated I’m positive.  Friday night’s generosity alone includes high fives, chest bumps, selfies, and Laker’s floor seats (with parking even). I can only imagine how much he gives back to his own community. He makes it look so effortless and it’s clearly not.  Maybe what seems effortless is actually thoughtless, not inconsideration, but rather literally without thought, pure instinct, like he’s got no other capacity other than philanthropy.

You can say basketball is just a game, but you’d be wrong. It’s so much more to so many. Magic Johnson is quite obviously an incredible man. Just in our 90 minutes together there was no denying his character. Even in recapping his personal success for us, he’s brought us fans a special type of satisfaction that only great athletes can do, tell us there is greatness is us because there is greatness in him. He makes it all seem so simple. He shows us the trick without breaking the illusion. As soon as it starts to seems like this guy could do it all, he humbly reminds us “I didn’t become Magic overnight.”