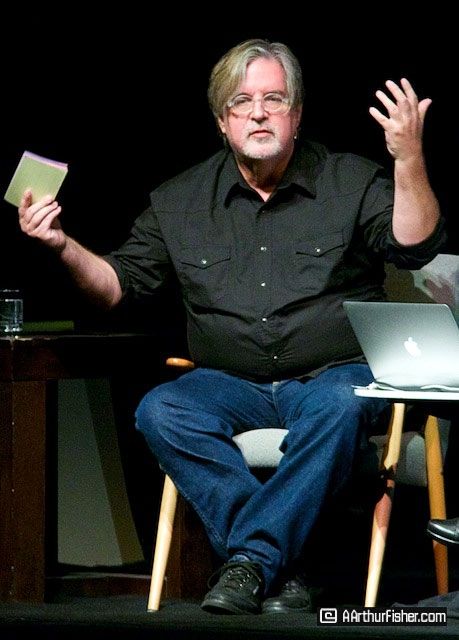 Written by Bill Buescher on 01 October 2014 Posted in Event Reviews.

Matt Groening and Lynda Barry Jump Off The Page

What was billed as an evening of "Love, Hate, & Comics" and of a "Friendship That Would Not Die" ended up being so much more as The Simpsons and Life In Hell creator Matt Groening and Lynda Barry, creator of the long running Ernie Pook's Comeek, spoke to a packed house at The Arlington Theatre Friday night.

The evening could have just as easily been an anthology of clips and clippings from each of their esteemed careers. The Simpsons, now in its 25th season and spanning nearly 600 episodes, is a cultural giant, appearing not only on the big screen, but in philosophy books, as LEGO blocks, even garnering them their own ride at Universal Studios in Florida. And the nearly 32 years of Lynda Barry's syndicated comic Ernie Pook's Comeek or anything from many illustrated novels (The Good Times Are Killing Me and What It Is to name a couple) could have handedly kept the audience bent over in stitches for the two hours they sat. However, the showcase of Matt and Lynda's personal histories and philosophies, their unlikely friendship of 40 years, and their undeniable theatrics and multimedia talents were on full display as the essence of the show and it kept the house enraptured.

Though scarcely five feet tall, Lynda Barry (or "Mrs. Chewbacca" as she insists her students at the University of Wisconsin call her) plays to the back of the room as she rises to speak. From the very first words of the evening she provokes the audience, saying "I'm so glad you chose to spend your evening with us...because you're all gonna die." It would be incredibly inappropriate to describe her in anyway but animated. Watching her reenact the harassment of her Filipino grandmother and the mayhem that was her home life, it's amazing to think that she spent this much time behind the page. I catch a security guard, whose purpose for the evening is to remain unflappable, fight desperately to remain collected while she speaks; he loses. From here, Lynda spends the rest of the evening being as bawdy, sarcastic, self-effacing, caustic, and morbid as she damn well pleases.

It's unclear whether or not Matt Groening understands that when he speaks about his real family, his father Homer, his mother Marge, his sisters Lisa and Maggie, that the audience feels like it's theirs as well. When he takes the floor for the first time and shows a picture of a clown named 'Rusty Nails', explaining that he was the inspiration for 'Krusty The Klown' the audience discharges a deep "aww," as if Matt has opened his photobook to our long lost uncle. The sincere connection with him and his family becomes even more surreal when he points to his sister Lisa, the one we all know as the jaundiced, brainiac seven year -old and The Simpson's moral compass, who is sitting in the audience among us tonight.

Matt continues to make us feel like The Simpsons are less a farce and more a personal history. We see Marge and Maggie not in yellow ink, but in black and white on photo paper. Next, a short film plays of Homer Groening making consecutive, overhead, and backwards basketball shots from half court and for the first time the audience experiences Homer not as the bumbling, fat, impatient, uncoordinated oaf that we know and love, but as the patient, athletic, and methodical father that Groening humbly remembers on our behalf.

"That's our Homer." Matt says. It's strange and a little sad to remember that not one of us (save Lisa Groening) knows him, no matter how easy it is to feel like we do.

Matt and Lynda continue to detail for us the modest beginnings of their auspicious friendship. Both attending Evergreen State College in Olympia, Washington, they found each other as struggling cartoonists discovering how best to take advantage of their incredibly liberal education. Lynda remembers first hearing of Matt, whom she referred to as 'Bobo', when as editor of the Cooper Point Journal he announced he would print anything anyone submitted. This sparked the young antagonizer Lynda Barry to submit a series of harassing submissions including: unserious outrage letters to the editor about things that happened to her when she was seven, a complaint that the media department was loaning rifles out to the students, and a doodle of a barely legible stick figure with a caption reading "What is wrong with this picture?" All of which were printed.

Matt remembers it differently. He recalls a Joseph Heller obsessed version of himself hearing of a girl from another dorm who had written to Heller and received a response. Giddy, he eventually tracks down Lynda only to discover that in order to provoke a response out of the author she penned the returned address as Ingrid Bergman, the legendary actress of 'Casablanca' fame.

"I asked [Heller] if he would marry me and he said he would, but he didn't want live in the dorms," she remembers with a twinge of bashfulness. At just the moment it begins to seem as if the evening would solely be a chronology, Lynda provokes us again by posing to us a question which she explains has shaped her entire life.

"What is an image?" she asks. First posed by Lynda's mentor Marilyn Frasca, she demands of us to quickly shout out our first phone numbers. The room instantly becomes an echo chamber of area codes and then falls silent just as quickly. As a follow up she tells us to shout our number from three phone numbers ago. Silence.

"Do you feel the difference?! It's almost like you feel a physical difference. What the hell is that?!" Lynda goes on to explain "That first one is an image. That second one is thinking." We feel it.

She continues to blow our minds by showing us a video comparing people sketching. A child, a physics professor, and Pablo Picasso play on the big screen as they scribble a rough outline of an image. Lynda urges us not to undermine this comparison, emphasizing that all the images look roughly the same because to her "That's what an image looks like when someone is having an experience by hand." The room hushes at how powerful that idea just may be. She grins and teases "Now that I'm an academic I get to show this shit."

The room's attention returns to Matt. He reads us a handful of his "Life in Hell" comics that are as recent as 2007. They are unsurprisingly hilarious and as the room guffaws it's hard to think that the lot of us missed something this funny. In fact, there is so much about Friday night that isn't "The Simpsons" that when Matt and Lynda finally call for questions no one feels happy that all this wonderful momentum is bringing the night towards a close.

No one who stands at the microphone can speak fluidly in front of our two iconoclasts, Matt and Lynda. Everyone's question comes out only barely after lengthy preambles of spasmodic anecdotes. They beg for autographs and ask for different sorts of advice, but only one question really speaks to the obvious theme of the night. A young lady steps to the microphone and after a few brief moments of trying to figure out exactly what she means to say, she submits the question I have been wondering to myself the entire night.

"What is it like to know that your family, The Simpsons, have become like family to all of us?"

"It's weird." Matt says, bluntly recognizing his zeitgeist. The room deflates momentarily before Lynda picks it up and encapsulates the night for us with the evening's final words.

"Your question was beautiful. It goes back to this idea of images and how healing they can be. The Simpsons did you good. It's this odd sort of yellow medicine."